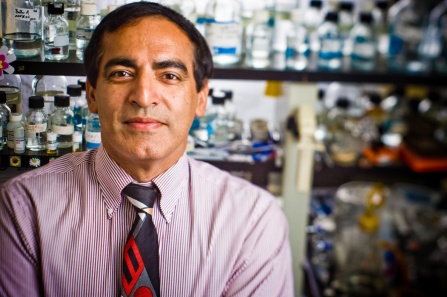 Sanjay Sethi, MD, chief of the Division of Pulmonary, Critical Care and Sleep Medicine in the Department of Medicine at UB, is an expert on lung disease and the respiratory effects of smoking and vaping.

BUFFALO, N.Y. — The recent emergence of severe and even fatal vaping-related lung disease presents a challenge for health care providers, according to Sanjay Sethi, MD, professor and chief of the division of pulmonary, critical care and sleep medicine in the Department of Medicine in the Jacobs School of Medicine and Biomedical Sciences at the University at Buffalo.

Sethi is an expert on lung disease, especially chronic obstructive pulmonary disease (COPD) and the respiratory effects of smoking and vaping.  He has always been concerned about the potential toxicity of vaping-related lung disease in his practice at UBMD Internal Medicine, and he noted that the rising incidence is now causing some changes in the practice of health care providers.

“Because of the incidence of vaping-related lung disease, it’s now recommended that we ask individuals who come in with respiratory complaints about their vaping habits in the 90 days before the onset of their symptoms,” said Sethi.

In one case treated in Buffalo, the patient presented with progressive shortness of breath and cough.

“What is also a challenge is that the symptoms are nonspecific,” he said. “Patients can have gastrointestinal symptoms as well as what we call constitutional symptoms, such as fever and fatigue.

“What is unusual is that they do not respond to the usual treatments, such as antibiotics, and that so many of these patients, who are typically young and otherwise healthy, have to be hospitalized.”

Sethi noted that the New England Journal of Medicine has published a case series of vaping-related illness from Wisconsin and Illinois.

“That is something every physician who could potentially treat such a patient should be familiar with,” he said. “Clearly the problem is not one disease, but different patterns of acute lung injury to toxic exposures.”

Asked what his advice is on vaping, he said:  “Ideally, patients should not vape. It’s too risky, especially for non-nicotine products such as THC and CBD.

“Even nicotine-only products could be dangerous, as patients in 20% of the reported cases said they had used only nicotine-containing products.”

Broadcast studio is available at UB.