Powered by an El Niño Pacific Ocean warming event, temperatures in October set records globally, in the Northern Hemisphere and the Tropics, while temperatures in the Southern Hemisphere pushed toward the upper end of the dataset, said Dr. John Christy, director of the Earth System Science Center at The University of Alabama in Huntsville. October 2015 was the warmest October in the 36-year satellite temperature record, pushing past October 1998 during what was then called the El Niño of the Century.

“We thought this El Niño had the potential to be a record setter for some of the quantities we track, and it isn’t disappointing,” Christy said. “Not only is this a strong El Niño, but the transient warming we see from it is superimposed on top of the slowly rising global base temperature. The satellite temperature dataset shows an overall warming of about 0.39 C during the past 36 years. Put a strong El Niño on top of that and we shouldn’t be surprised at what we saw in October.” 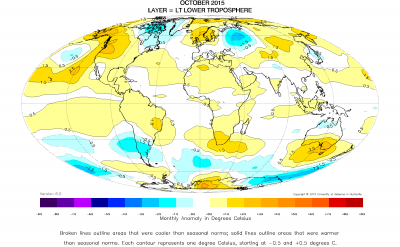