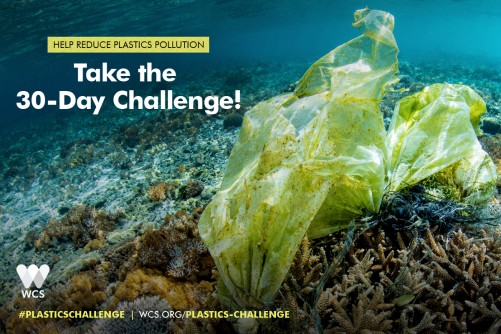 Newswise — NEW YORK (June 8, 2017) – For World Oceans Day – celebrated today across the globe –  WCS launches the 30-Day Plastics Challenge to reduce use of single-use disposable plastics, and to bring attention to the fact that, by some estimates, a staggering 5 trillion pieces of plastic are currently floating in the world’s oceans.

The challenge is simple. Participants download a template and over the next month track how many times they use reusable shopping bags, fill up and reuse their water bottles, and pass on a plastic straw and drink directly from the cup. These small changes in behavior can make a big impact in reducing plastic waste.  More than 1,700 people have signed up to participate in the challenge so far.

Plastic pollution is a major problem for marine wildlife. Animals such as sea turtles, birds, and fish may get tangled in it or mistake it for food. It can even impact people, as the chemicals from plastics travel up the food chain

Said John Calvelli, WCS Executive Vice President for Public Affairs: “Plastic pollution is a silent killer of marine wildlife in all the world’s oceans. But we can do something about it through simple lifestyle choices. The 30 Day Plastics Challenge is a great way to get started.”

Jon Forrest Dohlin, WCS Vice President and Director of the New York Aquarium, said, “Reducing the use of disposable plastics maybe the single most important thing the public can do to save marine wildlife whether here in New York waters or on the other side of the globe. We urge everyone to take the 30 Day Plastics Challenge and do their part to make our oceans plastics-free.”

WCS will provide weekly email updates to all participants in order to check in and collect results. At the end of the challenge, a final count will be made to see how many items were kept out of the waste stream. Participants are encouraged to share their progress on social media using the hashtag #PlasticsChallenge.

The challenge is being made as the UN Ocean Conference continues this week, running from June 5-9. The conference gathers experts from around the world to work on achieving Sustainable Development Goal 14 – to sustainably use and conserve the world’s oceans and marine resources.

In 2015, WCS championed legislation that led to the ban of plastic “microbeads” commonly found in soaps.  The legislation was eventually signed into law by President Obama.