What Does Sexy, Food, World Travel and Super Career Bring to Mind? Agriculture, of Course

For something that engages all the senses, this should be abundantly clear: food and all things associated with it is, in a word, sexy. Yes, sexy as in exciting and appealing. Seriously. 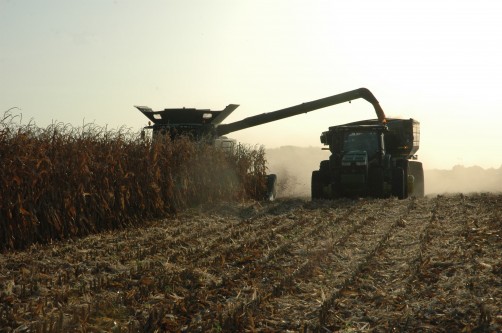 Unloading corn from a combine into a wagon on the go. To feed the growing populatinos, the world needs farmers, agricultural scientists, health professionals, social scientists, engineers, marketers and educators.

Newswise — COLLEGE STATION — For something that engages all the senses, this should be abundantly clear: food and all things associated with it is, in a word, sexy. Yes, sexy as in exciting and appealing. Seriously.

Whether one grows it, markets it or eats it, food is a hot commodity that’s only going to get hotter. As the years tick by, scientists estimate the 9 billion of us on the planet by 2050 will be lured by the desire to have enough delicious, nutritious food.

While that is no doubt a huge challenge, there also is cause for optimism, said Dr. Fred Davies, Texas A&M University Regents professor and Senior Borlaug Fellow of Horticultural Sciences in College Station. He said National Ag Day celebrated this year on March 21, could be a call for people to get intimate with agriculture and the food it yields.

Food, or the lack thereof, has taken Davies all over the world in his career as a horticulturist. His comparisons of agriculture in the U.S. with similar nations, developing countries and impoverished places all boil down to one thing: the ability to feed an ever-expanding global population.

Assuring there will be enough food to go around will take more than farmers and ranchers, he said. Solving the complex food supply system shortages worldwide will take a combination of the best scientists, producers, and people in social sciences to bring about needed cultural behavioral changes, along with the best engineers to develop greater efficiencies.

“There’s a connection between food, energy, water, sanitation, health, nutrition and also smart politics,” said Davies, who serves as a senior advisor for the U.S. Agency for International Development. “So the whole thing is interconnected.

“And this is the first time in human history where the availability of water, land and nutrients are not going to increase. So how do we become more efficient?”

Not sounding all that sexy? Consider these opportunities.

Heads up, health and medical professionals.

While most who read this will have three meals and plenty of snacks today, one in six Americans – one of the wealthiest nations on the globe — receive some type of food assistance. An equal number of people are food insecure as well, he said. And the numbers are far worse is many countries.

“That leads to a lot of health and medical issues,” Davies said. “If you don’t have people who have access to the proper foods, eating sensibly and doing moderate exercise, then the problem is not going to be fixed.”

“It’s more than just science and good policy,” Davies said. “It’s also getting people to make behavioral changes, which is a long-term process. I grew up in an era of not using seat belts or recycling, but now those are things young people find important. Long-term education had to be done for that change to occur.” He said the same type of effort is needed in helping people adopt nutrition and exercise habits.

Additionally, he said about 30 percent of the world’s food is wasted, maybe only because of a blemish on a tomato or squash or a cucumber didn’t have the shape people think it should be.

“It has the same nutrition. It is perfectly good and perfectly healthy for you,” he said. “But the consumer prefers the perfect food with a flawless shape, so perfectly nutritious good stuff gets thrown away.”

Another example of a need for behavioral change, he said, is showing people how things are interconnected. In the developing world, kids constantly have diarrhea because they don’t have a clean water source or any water source in the house in order to wash their hands. If a child is exposed to diarrhea all the time, there is a shift in their gut that gets more resistant to diarrhea and thus reduces the absorption of vitamins and minerals, which leads to abnormal cognitive development for the child.

“The point is, everything is interconnected,” Davies said. “We can’t just fix one part. This requires education.”

Among the many facets needing greater efficiency, transportation, for example, has a huge problem of perishability loss. Too much of the developing world doesn’t have an adequate cold chain, or system of refrigeration to keep products fresh from the farm to the consumer, Davies noted. This can lead to about 30 percent of perishable food being thrown away. A lot of businesses and opportunities are primed to develop through engineering changes.

Davies said within the next 25 years, two-thirds of the world will be urban, and close to two-thirds will be entering the middle class.

“The marketplace has to play a role in all of this,” he said. “Developing areas, whether in Asia or in Africa, are seeing the middle class growing, which overall is a good thing. With more disposable income, people want more access to the good things we have. They want access to good food, which they deserve to have. And all of that comes with a cost.”

The investment in applied agriculture has diminished for the last 25-30 years, Davies said, and that coincides with the leveling of U.S. productivity, which previously had continually increased.

“We need to be investing in a new generation of young people to go into farming and to go into Extension or research,” Davies said. “We aren’t producing as many of these people anymore, and that should be a real concern for us.”

Finally but foremost, fall in, farmers.

Whether it’s typical row crop farming of corn, livestock ranching, newfangled ways of production like vertical farming of vegetables in an urban warehouse with LED lighting, or growing salad bowl crops on a city rooftop, bringing the farm closer to the consumer may appeal to a new generation of producers. Davies said similar but less sophisticated systems are springing up in developing countries, and while they will not feed all the world’s people, they can supply niche markets — providing a decent living for those who work at it.

“It’s tough to be a commercial farmer. Whether you are small or big, it’s tough to make a living,” Davies said. “We consumers don’t always appreciate how difficult it is.”

Yet, the career can be one of the most satisfying not only from the joy of producing but the knowledge that one’s product helped feed people and improve the world, he said.

For those who give farming a bad rap or have a negative view of the producer, Davies offered a blanket statement: “Really good growers are very much into sustainability. That does not mean they don’t use chemicals, but they only use what’s needed in a smart, integrated pest management way. They don’t want contamination in their environment because that’s where they live.

“Overall, there are great opportunities, but also great challenges,” he said. “We have to become more efficient in how we produce food, and we have to do it environmentally and while being economically sustainable. It’s about bringing people together through education, and it’s also through creating entrepreneurial opportunities to produce adequate food for the world.”