When Birds of a Feather Poop Together 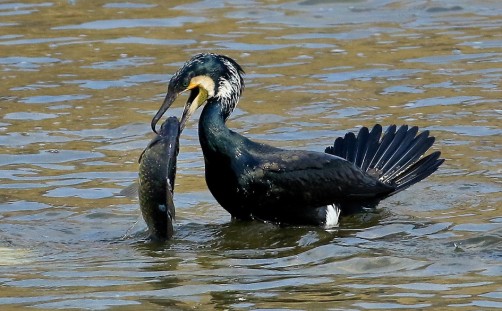 A cormorant grabs its lunch from the lake. A single cormorant can defecate approximately 4 g of nitrogen and 2.5 g of phosphorus daily. 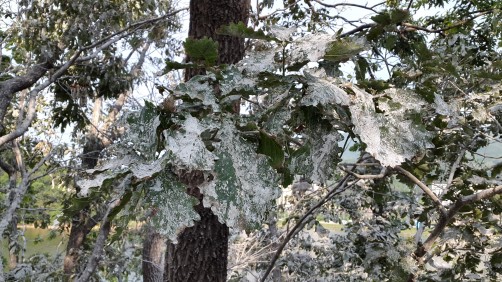 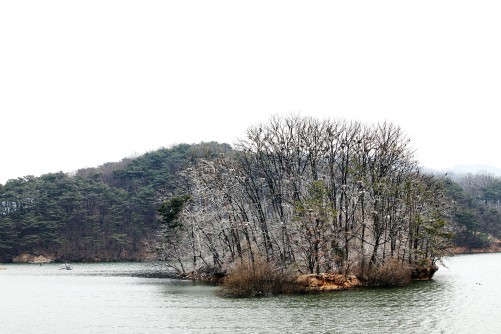 The small islet in the reservoir is home to many cormorants. Researchers investigated the impact of the cormorants’ feces on water quality.

Newswise — May 17, 2017 - Studying the effects of great cormorant droppings on water reservoirs is a dirty job, but someone’s got to do it.

At the Maji Agricultural Reservoir in Wonju, Gangwond-do, South Korea, that someone is Tae Kwon Lee. Lee regularly jogs around the reservoir. One day he noticed large black birds completely covering the small island in the lake. The black birds were great cormorants, a type of large water bird, and the trees on the islet were completely covered in the birds’ feces. As time passed, Lee made another observation: the lake suffered a severe algal bloom.

Algal blooms deplete oxygen in lakes, produce toxins, and end up killing aquatic life in the lake. This sequence of events got Lee wondering: Did the bird feces cause or contribute to the algal bloom?

The Maji reservoir is an important water source for local farmers who use the water for their crops in the summer. Maintaining water quality is important. About five years ago, the cormorants showed up and now there are 300-500 great cormorants inhabiting the lake and islet. That’s a lot of birds and a lot of bird feces, so it’s important to understand how the bird feces affects the water. The bird droppings are rich in phosphorus and nitrogen, and when it gets into the water, it adds those nutrients to the water.

Adding nutrients to an existing ecosystem can have a cascading effect. “The feces can influence not only water quality but also whole ecosystems including plants, soil, and other birds,” explains Lee.

Lee designed a microcosm experiment to test his hypothesis. He collected water, sediment, and yes, cormorant droppings, and created 14 miniature ecosystems. Each microcosm contained the same amount of water and sediment from the lake. Then Lee added .5 g, 1.0g, and 5.0g of cormorant droppings to the microcosms. Over the next 21 days, he tested samples of the water. Specifically, he was looking to see if the feces affected the amount of nitrogen, phosphorous, and other nutrients in the water.

Lee found that even a small amount of cormorant feces was enough to produce noticeable changes in the nutrient conditions of the water. These could be long lasting: “Furthermore, feces in the water acted as a nutrient source for days,” said Lee.

Lee also analyzed both the water and the sediment to document changes to the microbial (bacterial) communities.

While the microbial community of the water was only significantly affected when 5.0g of feces was added, the microbial community of the sediment was impacted by smaller amounts of feces. Based on his findings, Lee can’t blame the algal bloom completely on the cormorants. But Lee thinks their feces may have some influence, since chlorophyll concentrations, signaling more algal growth, doubled after adding only 0.5g of feces to the microcosms.

“Our results confirmed the changes in nutrient condition and microbial community in water caused by a small amount of feces,” Lee concluded. “Fecal input may adversely affect the condition of the reservoir, bringing about undesirable changes such as algae bloom.”

Lee recognizes the limitations of his experiment. “Microcosm experiments give researchers more control over variables normally not possible in the real world. But the results don’t fully represent what happens in the real world because the microcosm can’t completely mimic the real environment,” he explains.

Lee hopes to continue his research. “We want to understand how many birds a waterbody can support before becoming seriously polluted.” For Lee, studying the cormorants in the real world means the dirty work continues.

Read more about Lee’s research in Journal of Environmental Quality. 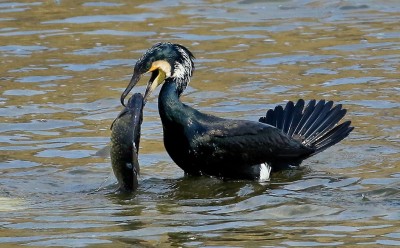 Caption: A cormorant grabs its lunch from the lake. A single cormorant can defecate approximately 4 g of nitrogen and 2.5 g of phosphorus daily. 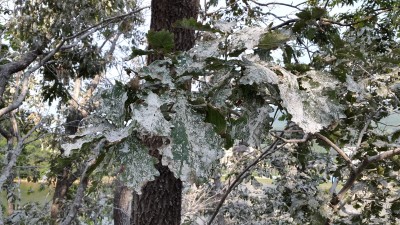 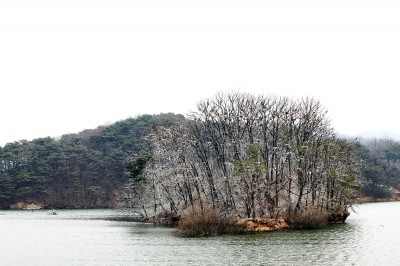 Caption: The small islet in the reservoir is home to many cormorants. Researchers investigated the impact of the cormorants’ feces on water quality.