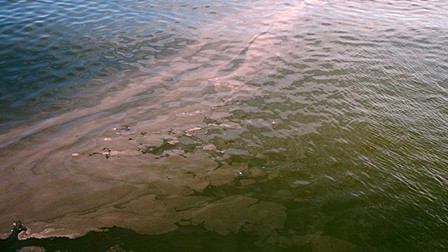 Photo courtesy of the Florida Fish and Wildlife Research Institute.

A red tide bloom off the coast of Florida. Blooms of Karenia brevis algae become more toxic when access to phosphorus is limited.

Newswise — When Gulf of Mexico algae don’t get enough nutrients, they focus their remaining energy on becoming more and more poisonous to ensure their survival, according to a new study by scientists from North Carolina State University and the National Oceanic and Atmospheric Administration.

The study shows that harmful and ubiquitous Karenia brevis algae, which cause red tide blooms across the Gulf of Mexico, become two to seven times more toxic when levels of phosphorus, a major algal nutrient found in fertilizers and human waste, are low. Like wearing a suit of armor, producing highly toxic cells allows the algae to defend themselves against opportunistic waterborne grazers like zooplankton.

Red tide blooms in the Gulf are linked to fish kills and other ecological and economic damage in the region, and are also linked to respiratory ailments in humans. These blooms occur annually in the Gulf, but it’s hard to predict where or when they’ll occur or how long they’ll last.

Drs. Rance Hardison and Damian Shea, co-authors on a paper appearing online in the journal PLOS ONE, say that the findings could help coastal managers make better predictions about the harmful effects of red tide blooms.

“Public-health managers can test phosphorous levels in waters across various Gulf locations,” Hardison said, “and know that low levels could indicate highly toxic red tide blooms. Then they can close nearby shellfish beds or take other measures to keep sea life – and humans – safe.”

The researchers tested five different K. brevis species from varied geographic locations and limited some samples’ growth by withholding phosphorus while allowing others to enjoy a full diet of phosphorus. Depending on the species, algal cells with limited access to phosphorus had 2.3 to 7.3 times more toxin than algal cells that were filled up with phosphorous.

“At the end of a red tide bloom, when the nutrients are used up, K. brevis cells produce a burst of toxicity. Now we understand the biological mechanism behind some of the varied toxic levels seen in Gulf algal cells,” Shea, an NC State professor of biology and environmental toxicology, said.

The irony of the inverse relationship between phosphorous and algal toxicity is not lost on the researchers. In a modern-day catch-22, excess nutrients like phosphorus and nitrogen play key roles in fueling algal growth and harmful algal bloom development. As bloom density increases, cells use up the available nutrients such as phosphorous. This slows the growth of K. brevis cells causing them to become more toxic. Previous research conducted by Hardison, a NOAA oceanographer who received his Ph.D. from NC State, showed similar effects when nitrogen was the limiting nutrient.

“We believe the findings will be useful to help model future toxic algal blooms and how harmful they’ll be,” Hardison said.

Increased toxicity of Karenia brevis during phosphate limited growth: ecological and evolutionary implicationsAuthors: D. Ransom Hardison, William Sunda, R. Wayne Litaker, National Oceanic and Atmospheric Administration; Damian Shea, North Carolina State UniversityPublished: March 12, 2013, online in PLOS ONEAbstract: Karenia brevis is the dominant toxic red tide algal species in the Gulf of Mexico. It produces potent neurotoxins (brevetoxins [PbTxs]), which negatively impact human and animal health, local economies, and ecosystem function. Field measurements have shown that cellular brevetoxin contents vary from 1? 68 pg/cell but the source of this variability is uncertain. Increases in cellular toxicity caused by nutrient-limitation and inter-strain differences have been observed in many algal species. This study examined the effect of P-limitation of growth rate on cellular toxin concentrations in five Karenia brevis strains from different geographic locations. Phosphorous was selected because of evidence for regional P-limitation of algal growth in the Gulf of Mexico. Depending on the isolate, P-limited cells had 2.3- to 7.3-fold higher PbTx per cell than P-replete cells. The percent of cellular carbon associated with brevetoxins (%C-PbTx) was ~ 0.7 to 2.1% in P-replete cells, but increased to 1.6? 5% under P-limitation. Because PbTxs are potent anti-grazing compounds, this increased investment in PbTxs should enhance cellular survival during periods of nutrient-limited growth. The %C-PbTx was inversely related to the specific growth rate in both the nutrient-replete and P-limited cultures of all strains. This inverse relationship is consistent with an evolutionary tradeoff between carbon investment in PbTxs and other grazing defenses, and C investment in growth and reproduction. In aquatic environments where nutrient supply and grazing pressure often vary on different temporal and spatial scales, this tradeoff would be selectively advantageous as it would result in increased net population growth rates. The variation in PbTx/cell values observed in this study can account for the range of values observed in the field, including the highest values, which are not observed under N-limitation. These results suggest P-limitation is an important factor regulating cellular toxicity and adverse impacts during at least some K. brevis blooms.