Why your kid’s strep throat keeps coming back 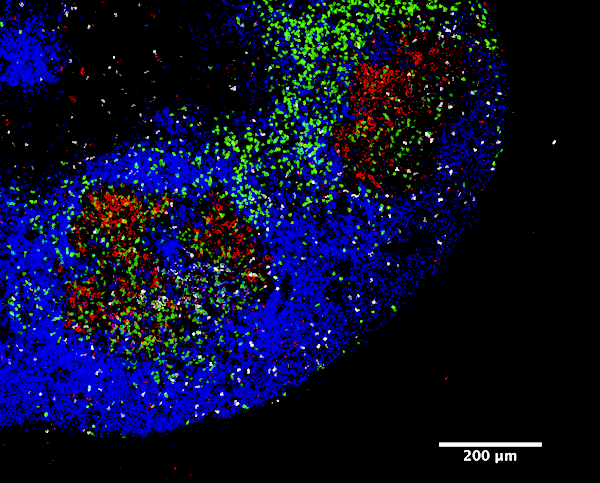 Naïve B cells (blue) team up with Tfh cells (white) in areas known as germinal centers (red) within tonsils. That interaction allows them to become mature, antibody-producing B cells (green).

Newswise — LA JOLLA, CA—Each year, some 600 million people around the world come down with strep throat. But for some children (and their parents) it’s more than an occasional misery. It’s a recurring nightmare. Yet, it was unclear why some kids are prone to repeated bouts of strep throat while others appear to be more or less immune. The latest study by researchers at La Jolla Institute for Immunology (LJI) provides the first clues why some children are more susceptible than others to contracting recurrent group A strep tonsillitis, better known as strep throat.

Their findings, published in the Feb. 6, 2019, issue of Science Translational Medicine, suggest that recurrent tonsillitis is a multifactorial disease where immunological factors combined with an underlying genetic susceptibility allow group A strep to invade the throats of certain individuals time and again. Gaining a better understanding of why some children fail to develop protective immunity also opens the door to developing a vaccine to protect against strep throat, the researchers predict.

“We have 100+ years of experience with this disease but there really wasn’t any good explanation why some kids suffer from recurrent strep throat,” says the study’s senior author Shane Crotty, Ph.D., a professor in the Division of Vaccine Discovery. “We think that this is the first solid evidence that there is an important immunological component as well as a genetic one which together contribute to recurrent strep throat. Let’s try and build on it.”

“Repeated strep throat is the second most common indication for the removal of tonsils in children. Like every surgery it carries certain risks but there is recent data suggesting that tonsillectomy may increase the risk of upper respiratory tract diseases in the long term,” says pediatric otolaryngologist and senior co-author Matthew Brigger, M.D., M.P.H. , chief of the Division of Otolaryngology at Rady’s Children’s Hospital-San Diego. “My hope is that as we learn more about the causes behind recurrent strep infections we’ll be able to intervene before they happen.”

Strep throat is one of a diverse array of conditions caused by the bacterium Streptococcus pyogenes, better known as group A Streptococcus (GAS). It can cause pneumonia, scarlet fever, impetigo, which results in highly infectious skin sores, and necrotizing fasciitis, the feared flesh-eating disease. Unlike necrotizing fasciitis, strep throat is easily treated with antibiotics. But if left undiagnosed, it, too, can lead to serious complications.

“Here in the US we rarely see the consequences of untreated GAS infections,” says infectious disease physician and first author Jennifer Dan, M.D., Ph.D. Dan holds an appointment as Clinical Associate at LJI, which allows her to split her time between seeing patients at UC San Diego and doing advanced research in the Crotty laboratory. “But recurrent strep throat is a big concern in the developing world because kids who do not get antibiotics have a real risk of developing acute rheumatic fever or rheumatic heart disease, which is a major cause of acquired heart disease among young adults in the world.”

Trying to understand the longstanding mystery why some children are predisposed to frequent bouts of GAS tonsillitis and what their immune response looks like, the researchers turned to the tonsils themselves. Tonsils are lymph-node like structures located on each side of the back of the throat. Small pockets, or crypts, on their surface collect and sample microbes and can become the breeding ground for GAS.

Dan collected tonsil tissues from a cohort of children aged 5 – 18 who had their tonsils removed either because they suffered from repeated bouts of strep throat or underwent tonsillectomies for unrelated reasons such as sleep apnea. She was particularly interested in germinal centers, the central hubs where B cells have to team up with so-called follicular helper T cells (Tfh cells) to start producing antibodies.

In addition to a significant decrease in the frequency of both B and follicular helper T cells, tonsils from children with recurrent tonsillitis had consistently smaller germinal centers areas overall. “These kids have a poor germinal center response,” says Dan. “Interestingly it is associated with a particularly poor antibody response to SpeA, which is an important aspect of protective immunity.”

Short for streptococcal pyrogenic exotoxin, SpeA is not an essential component of the GAS genome. However, a particularly potent version of the toxin arose in the bacteria in the 1980s and these strains quickly swept the globe to become the most prevalent cause of strep throat. Children in the control group had high anti-SpeA antibody titers, which indicated that they had been exposed to the bacteria but did not get sick.

Among children with recurrent GAS tonsillitis the disease was likely to run in the family, suggesting a genetic component. Genetic testing revealed two specific genetic variants in the HLA region, which determines how pathogens interact with the immune system, that were associated with increased susceptibility to recurrent tonsillitis and one that protected against the disease.

“Since the immunological connection as well as the genetic connection are all tied to an insufficient antibody response against SpeA it suggests that recognizing this factor is actually a key problem for these kids,” says Crotty. “Having a vaccine that trains the immune system in advance might be able stimulate a protective immune response that can prevent recurring bouts of tonsillitis.”

About La Jolla Institute The La Jolla Institute for Immunology is dedicated to understanding the intricacies and power of the immune system so that we may apply that knowledge to promote human health and prevent a wide range of diseases. Since its founding in 1988 as an independent, nonprofit research organization, the Institute has made numerous advances leading toward its goal: life without disease.