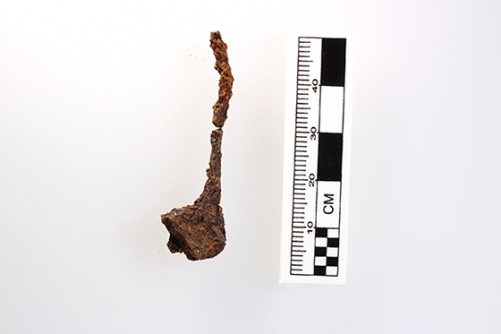 A horseshoe nail dating back to the early 1600s was discovered by a Wichita State University anthropology student at an ancient battle site near Arkansas City, Kansas.

Newswise — A Wichita State University anthropology student working on an archaeological site near Arkansas City, Kansas, has discovered an artifact dating back to the 1600s.

The find occurred at the site of the long-lost city of Etzanoa, discovered by WSU archaeology and anthropology professor Donald Blakeslee in 2015. Etzanoa is the known location of a 1601 battle between Spaniards and Native Americans.

WSU senior Mitchell Young was working in an ancient storage pit at the site Monday, June 5, when 87 centimeters below the ground he felt his tool hit a metal object.

After some further digging, Young uncovered a muddy, rust-covered nail that had clearly been there for some time.

"I didn't want to get my hopes up, but once I showed it to my professor, I got really excited," he says.

It turns out that the nail is of Spanish origin and was designed to stick out from a horseshoe (different from modern horseshoe nails).

The nail isn't bent, evidence that it hadn't been used in a horseshoe, Blakeslee says. Instead, he says, it was probably traded by one of Juan de Onate's men to a native. Juan de Onate was a conquistador and founding governor of the colony of New Mexico.

"The natives of North America had access only to iron from meteorites, which they regarded as property of the sky gods," Blakeslee says. "Hence, even a simple nail would have been valued."

Young, an Andover High School graduate, is still working on the site alongside Blakeslee and plans to graduate from Wichita State in December.