Newswise — MORGANTOWN, W.Va.—Before the whooping-cough vaccine came into widespread use in the 1940s, about 9,000 American children died from the infection each year. Today, thanks to the vaccine’s efficacy, reported cases of whooping cough have dramatically declined and fatalities have dropped to up to 20 children each year.

But for the vaccine to remain effective, it must be modified to keep pace with the whooping-cough bacteria as it evolves over time. Reconfiguring the vaccine to lengthen its period of protectiveness would help ward off the illness even more.

Heath Damron, an assistant professor in the West Virginia University School of Medicine, is pursuing these innovations.

“The goal is to be able to produce a vaccine that will deal with the waning efficacy but still remain safe,” he said.

Whooping cough, also called pertussis, is a respiratory infection that causes coughing fits so severe they can hinder breathing. When someone with whooping cough inhales after coughing, their breath makes an unusual “whoop” sound.

According to recent estimates, 90 percent of 15-year-olds are no longer immune to whooping cough because the vaccination they received when they were about 6 years old—and the booster they received when they were about 11—has worn off. The current pertussis vaccine is a combination vaccine that also protects against two additional diseases: tetanus and diphtheria. After the initial childhood vaccination schedule, teenagers and adults are only vaccinated against these diseases if they are at risk of tetanus infections. As a result, many of people don’t get booster shots, and they become susceptible to the disease.

That population’s lack of immunity puts them at greater risk of catching whooping cough and transmitting it to others, including unvaccinated newborns. The illness is highly contagious and can be particularly serious for babies.

“You have an adult population that’s passing whooping cough around, and it’s going to be worse in a child or adolescent than in an adult. That’s where this immunity profile is a problem that needs solved,” Damron said.

Additionally, over time, bacteria causing whooping cough accumulate mutations that make them less and less like the bacteria that the vaccine was designed to attack. Today’s vaccine still recognizes three-to-five important proteins found in whooping-cough-causing bacteria, and it helps our body fight infection by recognizing and killing these bacteria. But over time, some strains of whooping cough have evolved to lose the proteins that the vaccine recognizes, giving the vaccine fewer proteins to target.

And those strains are increasingly common.

Damron’s five-year project is backed by the West Virginia Higher Education Policy Commission, which awarded WVU a $1.3 million Research Challenge Grant to update the whooping-cough vaccine, improve the effectiveness of the tuberculosis vaccine and develop a vaccine against a stubborn form of pneumonia that can prove fatal in cystic-fibrosis patients. The grant also supports the establishment of WVU’s new vaccine development center.

Damron envisions that the center will serve three purposes: stimulating research into new ways to make and deliver vaccines, fostering collaborations between university and industry researchers, and giving students experience with leading their own vaccine research.

“Vaccines are arguably one of the most important public health measures developed. We are very excited to see the inclusion of a program where graduate students can apply for their own grants,” said John Barnett, who chairs the WVU Department of Microbiology, Immunology and Cell Biology. “We expect this will foster the interest in vaccine development by the students as well as provide some exciting ideas on how to develop new and better vaccines.”

“As we make discoveries in this new center, we will aim to translate our findings into protective vaccines that will enhance human health,” Damron said. “And this will happen right here in West Virginia.” 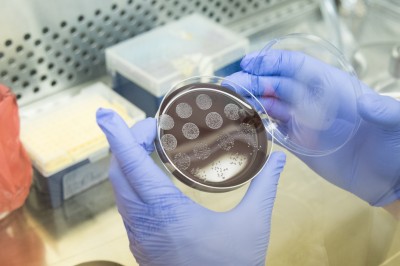 Caption: Bordetella pertussis, which causes whooping cough, is one of the bacteria that WVU researchers are working to safeguard the public against. In 2012, nearly 50,000 cases of pertussis occurred in the United States—the highest number since 1955. In contrast, fewer than 10,000 cases were reported in 1992. 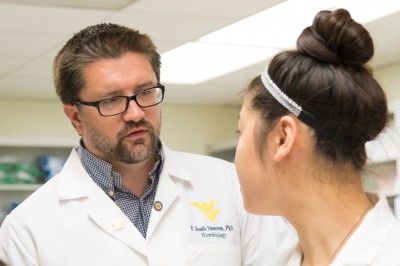 Caption: Heath Damron, an assistant professor in the WVU School of Medicine, is working toward a more effective whooping-cough vaccine. Introduced in 1990, the current vaccine causes fewer side effects, but is less protective, than its predecessor.