A New Look at Language Delay in Children With Autism 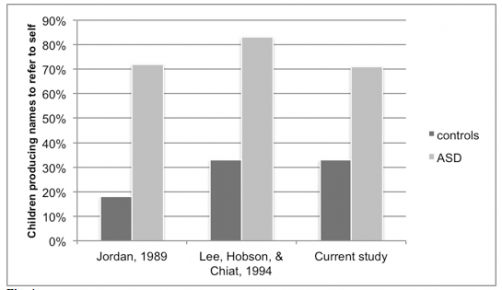 Newswise — AUSTIN, Texas — A new study by a linguistics professor and an alumnus from The University of Texas at Austin sheds light on a well-known linguistic characteristic of autistic children — their reluctance to use pronouns — paving the way for more accurate diagnostics.

Pronouns — words such as “you” and “me” in English — are difficult for children with autism, who sometimes reverse them (for example, using “you” to refer to oneself) or avoid them in favor of names.

Richard P. Meier, a linguistics professor in the College of Liberal Arts at UT Austin, and Aaron Shield and Helen Tager-Flusberg from the Department of Psychological and Brain Sciences at Boston University, examined whether the same applied with American Sign Language.

Previous research attributed these pronoun hiccups to language confusion or echolalia — automatic repetition of noises or phrases. But, a first-ever study on the use of pronouns by native-signing children requires new theories, Shield explained.

“Our work suggests that the opacity of pronouns in English and other spoken languages is not at the root of the problem,” said Shield, a UT Austin Linguistics alumnus and lead author for the study. “We suspect, though more work is needed, that people with autism may differ in their experiences of selfhood.”

The crucial difference between signed and spoken language is that pronouns are points with the index finger toward oneself or others rather than spoken words that do not give learners any clue as to who they refer. Nonetheless, deaf children with autism avoided pronouns, preferring signed names.

For example, when shown a picture of himself, a child with autism — hearing or deaf — is more likely to say “that is Johnny” rather than “that’s me.”

“This research has great clinical significance for the deaf community and for educators of deaf children,” Meier said. “It helps us to better understand the linguistic markers of autism in all children, deaf or hearing, signing or speaking.”

Shield’s research was supported by a Harrington Doctoral Fellowship from UT Austin, the National Science Foundation, the National Institutes of Health, and the Autism Speaks Foundation. The paper, “The Use of Sign Language Pronouns by Native-Signing Children with Autism,” was published in the online publication of the Journal of Autism and Developmental Disorders in February 2015.

Caption: The ASL signs I/ME (left) and YOU (right). 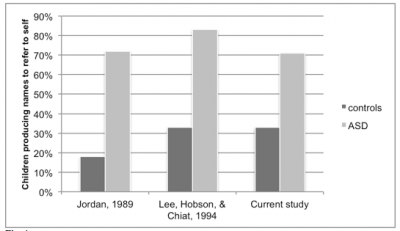 Caption: Percentage of TD and ASD children who produced pronouns in the pronoun elicitation task