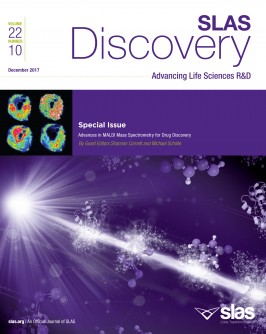 Newswise — Collectively, the articles in the December 2017 special issue of SLAS Discovery on Advances in MALDI Mass Spectrometry within Drug Discovery present a snapshot of innovation in the MALDI application space as it stands today.

Guest Editors Michael D. Scholle (SAMDI Tech) and Shannon Cornett (Bruker Daltonics) showcase the use of MALDI to characterize the secretory proteome of Streptomycin-resistant M. Tuberculosis as a first approach to understanding how best to treat resistant strains; a survey of buffers and additives that reports their effect on detection of analytes to guide biochemical assay development that is funneled into high-throughput mass spectrometry (HTMS) campaigns; and a high-throughput screening (HTS)-compatible strategy that uses self-assembled monolayer desorption ionization (SAMDI) to screen non-covalent binding of small molecules to target proteins.

Other articles in this special issue illustrate how MALDI mass spectrometry imaging (MSI) is used to study diseases and therapeutics, such as how to use MALDI imaging to analyze sections of eye after treatment with brimonidine to gain insight into transit and distribution of the drug through the eye; and how to map the distribution of glycosphingolipids in a Gaucher Disease model mouse brain to gain significant insight into the pathology of this disease.

Documenting how scientists combine disparate technologies to create synergies with MALDI TOF are articles by authors who use molecular imprint technology to capture and detect progastrin-releasing peptide (in addition, these authors have developed a visualization tool for MALDI data that can be quickly applied to the analysis of large datasets); and authors who discuss the identification of inhibitors of salt inducible kinases, in situ MALDI for screening the receptor tyrosine kinase cMET, and quantitative imaging of tryptophan and kynurenine metabolites in antitumor immune response.

Guest Editors Michael D. Scholle (SAMDI Tech) and Shannon Cornett (Bruker Daltonics) believe MALDI technology will continue to grow as instrumentation and scientific innovation further push the boundaries of its capabilities. Advances in MALDI speed, resolution, and sensitivity will continue to invigorate the imagination as new possibilities for this powerful technology are explored.

Visit SLAS Discovery Online at http://journals.sagepub.com/toc/jbxb/22/10 to read the special issue on Advances in MALDI Mass Spectrometry within Drug Discovery. SLAS Discovery is one of two MEDLINE-indexed scientific journals published by SLAS. For more information about SLAS and its journals, visit http://www.slas.org/journals.