And then there was light

Research provides new insights on the photoconversion mechanism of phytochromes 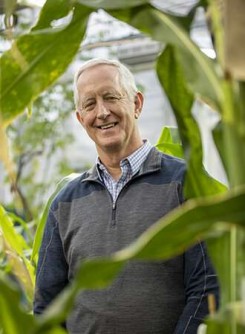 Research from the laboratory of Richard D. Vierstra, the George and Charmaine Mallinckrodt Professor of Biology in Arts & Sciences at Washington University in St. Louis, provides new insights on the photoconversion mechanism of phytochromes.

Newswise — Light provides the energy that plants and other photosynthetic organisms need to grow, which ultimately yields the metabolites that feed all other organisms on the planet. Plants also rely on light cues for developing their photosynthetic machinery and to sync their life cycles around daily and seasonal rhythms.

For example, photoreceptor pathways in plants allow them to determine how deep a seed is in the soil, to “measure” the waning daylight hours and to alter a plant’s development to prepare it for the onset of summer or the beginnings of winter.

New research from Washington University in St. Louis provides insight into how proteins called phytochromes sense light and contribute to how plants grow. The paper is published this week in the Proceedings of the National Academy of Sciences.

“Phytochromes are unique among photoreceptors because they exist in two stable yet interconvertible states: an inactive form that is synthesized in the dark and another that requires light for activation,” said Richard D. Vierstra, the George and Charmaine Mallinckrodt Professor of Biology in Arts & Sciences.

“By measuring the proportions of these two forms as they flip back and forth, phytochromes can sense light intensity, duration, light color and even day length. How these dark and light forms differ has remained enigmatic despite 60 years of research on photoreceptors.”

Vierstra and his collaborators overcame a major hurdle toward defining the sequence of events that support the transition between light- and dark-adapted states.

They discovered and characterized a crystal form of the photoreceptor PixJ from the cyanobacterium Thermosynechococcus elongatus — one that allows reversible photoconversion between the active and inactive forms. Remarkably, the crystals retain their integrity during the photoconversion process. Sethe Burgie, research scientist in biology in Arts & Sciences and first author of the paper, was able to collect the high resolution X-ray diffraction data necessary for identifying intermediates of the reaction pathway, using a sophisticated technique called X-ray crystallography.

Researchers should now be able to use newly developed X-ray free-electron lasers to acquire structural snapshots of this phytochrome crystal as it initially absorbs light through its inactive photoreceptor to when it acquires its fully mature active state — a process that is complete within a millisecond.

In a preliminary test, the Vierstra group was able to see the first twitch of the photoreceptor as the part of its chromophore that captures the light energy rotated upon photoactivation.

“In other words, it should now be possible to make an atomic-resolution molecular movie that outlines the structural transitions of the photoreceptor,” Burgie said. “We are now at the cusp of defining the internal events and sequence of physical changes that happen within phytochromes as they move between biologically inactive and active states, which will ultimately help researchers to tinker with plants to improve their agricultural yield and sustainability.”

Understanding the structural underpinnings of the photoconversion cycle is an important step toward developing modified phytochromes that endow crop plants with beneficial light-sensing properties.

“Additionally, as phytochromes sense both light and temperature, altering phytochrome function has great potential for tailoring crops better fit to specific environments and might help to expand the range of these crops,” Vierstra said.