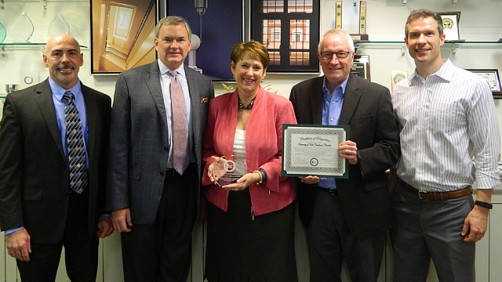 Newswise — CHARLOTTE, N.C. - Feb. 7, 2017 - UNC Charlotte has a robust history of regional engagement that supports economic development, community engagement, innovation and entrepreneurship. In recognition of this strong commitment, the Association of Public and Land-grant Universities (APLU) has designated UNC Charlotte an Innovation and Economic Prosperity University.

With this national designation, UNC Charlotte joins 54 other public institutions that are improving lives well beyond the confines of their campuses, said APLU President Peter McPherson. “Public research universities, such as UNC Charlotte, serve as economic engines for their local communities and states by conducting cutting-edge research that yields breakthroughs … Equally important, these institutions cultivate the talent necessary to help fledgling businesses take flight and ensure existing enterprises have the human capital they need to maintain their dynamics."

“Compared to the other APLU-designated Innovation and Economic Prosperity Universities, UNC Charlotte was founded much later; yet, we’ve made significant strides in economic engagement throughout the region,” said LaMattina. “As one of a cohort of other public universities with this designation, UNC Charlotte has access to best practices that will enable us to strengthen how we partner with campus units as well as business and industry.”

As part of the rigorous application process, the University conducted a self-assessment that identified areas of opportunity for improvement; these were related to research, communication and entrepreneurship.

“Moving forward we can develop action plans to further develop these areas we have identified, and we can track our progress as we learn from other institutions in order to enhance our efforts in economic engagement,” LaMattina explained.

He added that the University made wise investments in large-scale shared infrastructure on the Charlotte Research Institute campus and in uptown Charlotte that illustrated how UNC Charlotte has had a transformative economic impact for the greater Charlotte region. These were included as part of the application process.

“More than 42 companies are in residence on our campus; this allows our faculty and students to work side by side with businesses on research, entrepreneurship and workforce development," said LaMattina. "Our Partnership, Outreach and Research to Accelerate Learning (PORTAL) Building, which houses the Ventureprise business incubator, has been a springboard to accelerate innovation and economic development through partnerships with regional stakeholders as well as multinational companies.”

Aligning with some of Charlotte’s target industry sectors, the University has invested in energy, finance, health and life sciences and motorsports.

The Energy Production and Infrastructure Center (EPIC) was developed in response to the energy industry’s need for well-educated and highly trained engineers and as a means to provide sustainable support for applied research. Since its founding, EPIC has become a national leader in energy research and development and a catalyst for economic development.

Other partnerships with academic colleges include the Bank of America (BofA) Applied Technology Program with the College of Computing and Informatics and the Belk College of Business. This program supplies 25 student internships to BoA each year. The College of Health and Human Services and Mecklenburg County Health Department (MCHD) launched an Academy for Public Health Innovation designed to improve community health and enhance education. Research from the Motorsports Center consistently contributes to NASCAR to improve both performance and safety. Additionally, the William States Lee College of Engineering and Charlotte-Mecklenburg Schools are partnering on the Charlotte Early Engineering College, an early college high school program located on the UNC Charlotte campus that is designed to promote STEM education and careers in the sciences.

Also, UNC Charlotte was vital to the efforts to extend Charlotte’s Blue Line light rail transit to the University City area. UNC Charlotte donated campus land for the line and stations and has partnered with a nearby hospital to fund an elevated crosswalk for transit passengers that connects to parking decks, the train platform and the campus. In the past year, nearly 2,000 new apartments have been announced, many of them in conjunction with mixed-use development projects that are generating new jobs and improving prospects for business and industry along the Blue Line Extension. Service will begin operating in summer 2017.

“Economic engagement is a core priority of UNC Charlotte, North Carolina’s urban research institution,” said LaMattina. “Under the leadership of Chancellor Philip L. Dubois, the University has embarked upon a mission to help solve issues confronting the business community and prepare graduates for the workplace, ready to solve problems, and to become tomorrow’s innovators, entrepreneurs and leaders.”