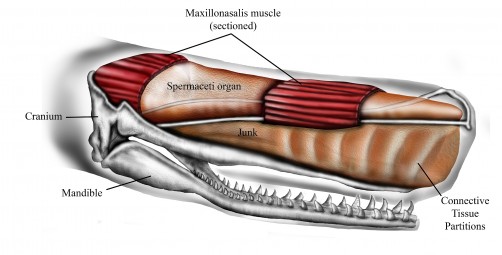 Newswise — A new study addresses a controversial hypothesis regarding the potential ramming function of the sperm whale’s head. The hypothesis, originally proposed by a 19th century whaler, suggests that the forehead of male sperm whales evolved partly to be used as a battering ram weapon when fighting for access to reproductively active females. This hypothesis was instrumental in inspiring Herman Melville to write the novel Moby Dick but its mechanical feasibility had never been addressed.

An interdisciplinary team from Australia, UK, USA and Japan used structural engineering principles to test how the head of the sperm whale might be able to resist strong ramming impacts.

“The sperm whale forehead is one of the strangest structures in the animal kingdom,” says Dr. Olga Panagiotopoulou from the University of Queensland, and the lead author of the paper. “Internally the forehead is composed of two large oil-filled sacs, stacked one on top of the other, known as the spermaceti organ and the junk sacs. It is the oil within the upper spermaceti organ that was the main target of the whaling industry in the early 19th century”. Panagiotopoulou adds, “This whole complex is highly sexually dimorphic which means that it is much larger in males than in females, a pattern commonly found in species in which males fight to compete for females.”

The battering ram hypothesis was originally proposed by a 19th whaler, Owen Chase, after his ship, the Essex, was sunk by a large male that intentionally rammed the ship with his forehead.

Professor David Carrier, a co-author from the University of Utah said “we know that the sperm whale head is important in transmitting sonar clicks and there are many other hypotheses about its role in communication and buoyancy”. “But none of these hypotheses could explain how the sperm whale head could function as a weapon capable of sinking ships that are four to five times the mass of the whale”.

“The ramming hypothesis was received with reluctance by the scientific community” says Panagiotopoulou. “This was mainly because the front part of the sperm whale head houses sensitive anatomical structures that produce the sounds essential for sonar and would be in harm’s way in a ramming event. Also not many people had actually observed sperm whales ramming”.

“We were fascinated when we received a report from a pilot and conservation researcher, who documented sperm whales ramming while flying over the Gulf of California” says Carrier. And adds “we then knew that our ramming hypothesis had some merit and looked into the available technology to test it”.

“Creating a computer model to simulate ramming in sperm whales was a challenging task” adds Dr. Spyridis, consulting engineer and a co-author of the study. “When analysing bridges, tunnels, or buildings you are given exact measurements and material properties for the simulations but in this case we were restricted to limited published data and we had to perform a series of sensitivity tests to ensure model efficiency”, he adds.

“We used probabilistic simulation to study the mechanical effects of impact variation”, said Associate Professor Todd Pataky from Shinshu University in Japan and senior author of the paper. “After creating a series of modified versions of the type and direction of impact force on the sperm whale head, we concluded that the connective tissue partitions embedded within the junk absorb impact stresses and protect the skull from fracturing”

“Increased skull stresses at a ramming event can be detrimental for the animal since they can cause fatal fractures”, says Panagiotopoulou. “Our findings show that the mechanical advantage of the structure of the junk may be the result of acquired traits related to selection on male to male aggressive behaviour. Although male sperm whales may not fight frequently, we know that aggressive ramming behaviour is a common characteristic in the group of mammals from which whales are derived - the even-toed ungulates, the artiodactyls. A closer look into the anatomy of the heads of other species of whales that ram may reveal a variety of protective mechanisms”.

“Our study has limitations but we hope to stimulate future research to unravel the mechanical function of the head during head-butting events in other species, where aggressive behaviour has been observed, but remains unmodelled” added Panagiotopoulou.

PDF of this Press Release: http://static.peerj.com/pressReleases/2016/Press-Release-Panagiotopoulou.pdf

Link to the Press Preview of the Original Article. This link should only be used BEFORE the embargo ends and is for a low resolution version of the PDF: http://static.peerj.com/press/previews/2016/04/1895.pdf Note: this is an author proof and so may change slightly before publication.

Link to the Published Version of the article (quote this link in your story – the link will ONLY work after the embargo lifts): https://peerj.com/articles/1895 - your readers will be able to freely access this article at this URL.

PeerJ is an Open Access publisher of peer reviewed articles, which offers researchers a lifetime publication plan, for a single low price, providing them with the ability to openly publish all future articles for free. PeerJ is based in San Francisco, CA and London, UK and can be accessed at https://peerj.com/. PeerJ’s mission is to help the world efficiently publish its knowledge.

PeerJ has an Editorial Board of over 1,200 respected academics, including 5 Nobel Laureates. PeerJ was the recipient of the 2013 ALPSP Award for Publishing Innovation.

Abstract (from the article)

Herman Melville’s novel Moby Dick was inspired by historical instances in which large sperm whales (Physeter macrocephalus L.) sank 19th century whaling ships by ramming them with their foreheads. The immense forehead of sperm whales is possibly the largest, and one of the strangest, anatomical structures in the animal kingdom. It contains two large oil-filled compartments, known as the “spermaceti organ” and “junk”, that constitute up to one-quarter of body mass and extend one-third of the total length of the whale. Recognized as playing an important role in echolocation, previous studies have also attributed the complex structural configuration of the spermaceti organ and junk to acoustic sexual selection, acoustic prey debilitation, buoyancy control, and aggressive ramming. Of these additional suggested functions, ramming remains the most controversial, and the potential mechanical roles of the structural components of the spermaceti organ and junk in ramming remain untested. Here we explore the aggressive ramming hypothesis using a novel combination of structural engineering principles and probabilistic simulation to determine if the unique structure of the junk significantly reduces stress in the skull during quasi-static impact. Our analyses indicate that the connective tissue partitions in the junk reduce von Mises stresses across the skull and the load-redistribution functionality of the former is insensitive to tissue material parameters, the thickness of the partitions, and variations in the location and angle of the applied load. Absence of the connective tissue partitions increases skull stresses, particularly in the rostral aspect of the upper jaw, further hinting of the important role the architecture of the junk may play in ramming events. Our study also found that impact loads on the spermaceti organ generate lower skull stresses than an impact on the junk. Nevertheless, whilst an impact on the spermaceti organ would reduce skull stresses, it would also cause high compressive stresses on the anterior aspect of the organ and the connective tissue case, possibly making these structures more prone to failure. This outcome, coupled with the facts that the spermaceti organ houses sensitive and essential sonar producing structures and the rostral portion of junk, rather than the spermaceti organ, is frequently a site of significant scaring in mature males suggest that whales avoid impact with the spermaceti organ. Although the unique structure of the junk certainly serves multiple functions, our results are consistent with the hypothesis that the structure also evolved to function as a massive battering ram during male-male competition.