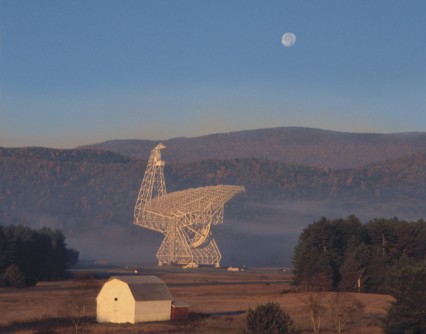 Newswise — Today astronomers celebrate the inauguration of the Green Bank Observatory in West Virginia, home to the 100-meter Green Bank Telescope, one of the world’s most powerful astronomical instruments.

Formerly a cornerstone of the National Radio Astronomy Observatory (NRAO), the Green Bank Observatory is now a fully-fledged, independent astronomical and educational facility of the National Science Foundation (NSF), operated under a cooperative agreement with Associated Universities, Inc. (AUI).

“Many of the most transformative discoveries in all of astronomy happened here in Green Bank,” said Karen O’Neil, director of the Green Bank Observatory. “As we move on to new horizons, the scientists, engineers, educators, and others here in Green Bank share a renewed excitement about the future and a desire to carry on this legacy of discovery and innovation.”

Green Bank launched the modern era of radio astronomy when the site was founded in 1956. It was the first U.S. national observatory funded by NSF and an essential step in advancing fundamental research in the United States. During its 60-year history, Green Bank has been home to some of the world’s most innovative and productive radio telescopes.

“AUI established the National Radio Astronomy Observatory here in Green Bank in 1956, and NRAO expanded through the years to other sites in the United States and Chile. Now as an independent observatory, Green Bank is returning to its roots and will pursue new projects, support a wider array of research, and take on new challenges at the leading edge of astronomy,” said Ethan Schreier, president and CEO of AUI. “The Green Bank Observatory and AUI are now poised to collaborate more readily with researchers, academic institutions, government agencies, entrepreneurs, and other organizations that can benefit from using these world-class facilities.”

In addition to NSF funding, the Green Bank Observatory also is funded by its collaborations with Breakthrough Listen [1], West Virginia University [2], and the North American Nanohertz Observatory for Gravitational Waves (NANOGrav) [3].

The Making of a National Astronomy Icon

Prior to 1956, radio astronomy was a fledgling and highly niche astronomy field in the United States. Only a handful of institutions and a couple dozen scientists across the nation conducted astronomy research at radio wavelengths. American scientists quickly realized, however, that they wouldn’t be able to keep pace with research in other countries without powerful instrumentation.

Because no single university or organization had the resources to design, build, and operate a state-of-the-art radio astronomy facility, NSF stepped in to create a national resource that could serve the entire astronomy community. In the decades since, Green Bank has helped to lead radio astronomy research in the United States and globally.

Initially outfitted with only a simple dipole antenna, Green Bank gradually accumulated an expanding orchard of trailblazing telescopes. Three years after the observatory’s opening, the 85-foot Tatel telescope -- best known for its role in the first-ever scientific search for extraterrestrial intelligence -- saw first light. By 1962, Green Bank wielded the world’s largest moving telescope to date: the 300-foot antenna, which lasted well past its planned lifespan until it crumpled under its own weight in 1988. In 1965, the 140-foot telescope saw first light and it continues to serve the international radio astronomy community through RadioAstron.

The mammoth GBT, inaugurated in 2001, ensures that cutting-edge research and engineering innovation will remain hallmarks of the observatory at Green Bank.

Astronomers not only value Green Bank for its iconic instruments. The physical location of the facility is a unique asset to radio astronomy research. Green Bank is nestled in a mountain valley, far from any major cities, surrounded by sloping topography that buffers against stray electronic radio interference.

The Green Bank Observatory also sits in the middle of a 13,000 square-mile area known as the National Radio Quiet Zone (NRQZ). This region was designated a national preserve for radio astronomy, ensuring that fixed transmitters would not interfere with the sensitive radio telescopes. Today, with the proliferation of wireless devises that would otherwise overwhelm radio astronomy observations, the NRQZ and its complementary region the West Virginia Radio Quiet Zone are more important than ever.

The outreach and informal science education efforts of the Green Bank Observatory are also integral to its operations. As a centerpiece of these programs, the Green Bank Science Center is an active and effective liaison between the radio astronomy community and the public. The center’s tours, workshops, exhibits, and education programs draw tens of thousands of students, teachers, tourists, and media personnel each year.

The radio astronomy observatory at Green Bank has been and will continue to be a mainstay of American astronomy. This site has a rich history of supporting scientists and capturing the public imagination. As a newly independent institution, Green Bank Observatory will maintain its role as the crux of many research endeavors that seek to answer the most important, longstanding questions about the Universe and humanity’s place in it.

Some of Green Bank Observatory’s major partnerships include:

3. The North American Nanohertz Observatory for Gravitational Waves (NANOGrav): NANOGrav is a collaboration of more than 60 scientists at more than a dozen institutions in the United States and Canada whose goal is to detect low-frequency gravitational waves, the rippling of spacetime produced by the spiraling orbit of a pair of supermassive black holes. The group uses radio pulsar timing observations to detect faint fluctuations in the fabric of the universe. In 2015, NANOGrav was awarded $14.5 million by the National Science Foundation (NSF) to create and operate a Physics Frontiers Center. A major portion of this work is being conducted by the GBT.