Astronomers reveal interstellar thread of one of life's building blocks

ALMA and Rosetta map the journey of phosphorus 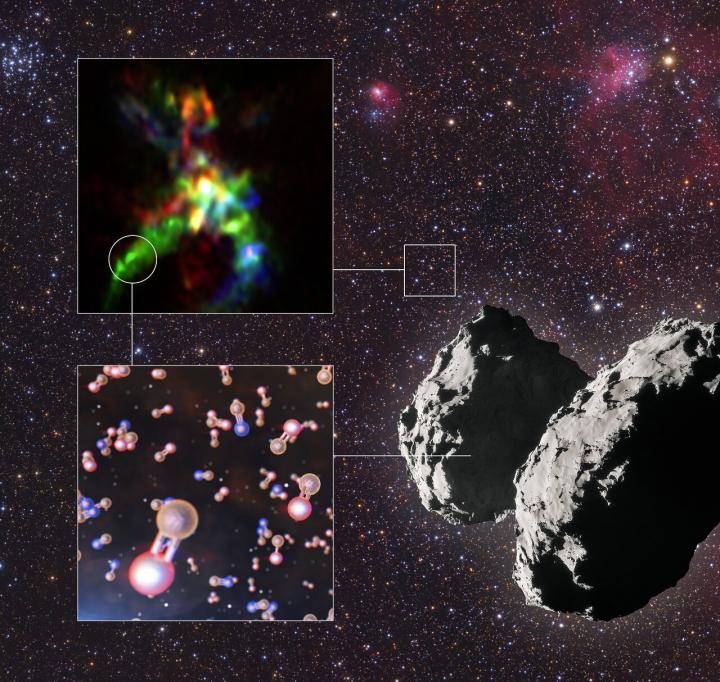 This infographic shows the key results from a study that has revealed the interstellar thread of phosphorus, one of life's building blocks. Thanks to ALMA, astronomers could pinpoint where phosphorus-bearing molecules form in star-forming regions like AFGL 5142. The background of this infographic shows a part of the night sky in the constellation of Auriga, where the star-forming region AFGL 5142 is located. The ALMA image of this object is on the top left of the infographic, and one of the locations where the team found phosphorus-bearing molecules is indicated by a circle. The most common phosphorus-bearing molecule in AFGL 5142 is phosphorus monoxide, represented in orange and red in the diagram on the bottom left. Another molecule found was phosphorus nitride, represented in orange and blue. Using data from the ROSINA instrument onboard ESA's Rosetta, astronomers also found phosphorus monoxide on comet 67P/Churyumov-Gerasimenko, shown on the bottom right. This first sighting of phosphorus monoxide on a comet helps astronomers draw a connection between star-forming regions, where the molecule is created, all the way to Earth, where it played a crucial role in starting life.

Newswise — Phosphorus, present in our DNA and cell membranes, is an essential element for life as we know it. But how it arrived on the early Earth is something of a mystery. Astronomers have now traced the journey of phosphorus from star-forming regions to comets using the combined powers of ALMA and the European Space Agency's probe Rosetta. Their research shows, for the first time, where molecules containing phosphorus form, how this element is carried in comets, and how a particular molecule may have played a crucial role in starting life on our planet.

"Life appeared on Earth about 4 billion years ago, but we still do not know the processes that made it possible," says Víctor Rivilla, the lead author of a new study published today in the journal Monthly Notices of the Royal Astronomical Society. The new results from the Atacama Large Millimeter/Submillimeter Array (ALMA), in which the European Southern Observatory (ESO) is a partner, and from the ROSINA instrument on board Rosetta, show that phosphorus monoxide is a key piece in the origin-of-life puzzle.

With the power of ALMA, which allowed a detailed look into the star-forming region AFGL 5142, astronomers could pinpoint where phosphorus-bearing molecules, like phosphorus monoxide, form. New stars and planetary systems arise in cloud-like regions of gas and dust in between stars, making these interstellar clouds the ideal places to start the search for life's building blocks.

The ALMA observations showed that phosphorus-bearing molecules are created as massive stars are formed. Flows of gas from young massive stars open up cavities in interstellar clouds. Molecules containing phosphorus form on the cavity walls, through the combined action of shocks and radiation from the infant star. The astronomers have also shown that phosphorus monoxide is the most abundant phosphorus-bearing molecule in the cavity walls.

After searching for this molecule in star-forming regions with ALMA, the European team moved on to a Solar System object: the now-famous comet 67P/Churyumov-Gerasimenko. The idea was to follow the trail of these phosphorus-bearing compounds. If the cavity walls collapse to form a star, particularly a less-massive one like the Sun, phosphorus monoxide can freeze out and get trapped in the icy dust grains that remain around the new star. Even before the star is fully formed, those dust grains come together to form pebbles, rocks and ultimately comets, which become transporters of phosphorus monoxide.

ROSINA, which stands for Rosetta Orbiter Spectrometer for Ion and Neutral Analysis, collected data from 67P for two years as Rosetta orbited the comet. Astronomers had found hints of phosphorus in the ROSINA data before, but they did not know what molecule had carried it there. Kathrin Altwegg, the Principal Investigator for Rosina and an author in the new study, got a clue about what this molecule could be after being approached at a conference by an astronomer studying star-forming regions with ALMA: "She said that phosphorus monoxide would be a very likely candidate, so I went back to our data and there it was!"

This first sighting of phosphorus monoxide on a comet helps astronomers draw a connection between star-forming regions, where the molecule is created, all the way to Earth.

"The combination of the ALMA and ROSINA data has revealed a sort of chemical thread during the whole process of star formation, in which phosphorus monoxide plays the dominant role," says Rivilla, who is a researcher at the Arcetri Astrophysical Observatory of INAF, Italy's National Institute for Astrophysics.

"Phosphorus is essential for life as we know it," adds Altwegg. "As comets most probably delivered large amounts of organic compounds to the Earth, the phosphorus monoxide found in comet 67P may strengthen the link between comets and life on Earth."

This intriguing journey could be documented because of the collaborative efforts between astronomers. "The detection of phosphorus monoxide was clearly thanks to an interdisciplinary exchange between telescopes on Earth and instruments in space," says Altwegg.

Leonardo Testi, ESO astronomer and ALMA European Operations Manager, concludes: "Understanding our cosmic origins, including how common the chemical conditions favourable for the emergence of life are, is a major topic of modern astrophysics. While ESO and ALMA focus on the observations of molecules in distant young planetary systems, the direct exploration of the chemical inventory within our Solar System is made possible by ESA missions, like Rosetta. The synergy between world leading ground-based and space facilities, through the collaboration between ESO and ESA, is a powerful asset for European researchers and enables transformational discoveries like the one reported in this paper."

This research was presented in a paper to appear in Monthly Notices of the Royal Astronomical Society.