Essential microbiological interactions that keep our oceans stable have been fully revealed for the first time, by researchers at the University of Warwick. 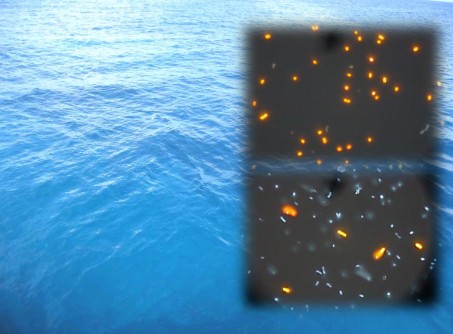 Representation of phototrophic and heterotrophic bacteria in the ocean

Newswise — Essential microbiological interactions that keep our oceans stable have been fully revealed for the first time, by researchers at the University of Warwick.

Dr Joseph Christie-Oleza and Professor David Scanlan from the School of Life Sciences have discovered that two of the most abundant types of microorganism in the oceans – phototrophic and heterotrophic bacteria – collaborate to cycle nutrients, consequently, drawing carbon from the atmosphere and feeding the ecosystem.

This is contrary to the popular scientific belief that marine phototrophs and heterotrophs compete with each other to consume the scarce nutrients found in seawater.

Phototrophic bacteria use light to ‘fix’ carbon dioxide from the air, and convert this into organic matter – which leaks out, and is consumed by heterotrophs, which in turn release nutrients back to the ecosystem so the phototrophic bacteria can continue to do their job: photosynthesise and fix more carbon.

This interaction keeps the level of nutrients in the ocean balanced and keeps a healthy base that ultimately sustains the entire marine food web. Half of the planet’s primary production and half of the oxygen we breathe rely on this system to work efficiently. The speed at which these nutrients are circulated will define the rate at which the oceans will continue to buffer against carbon dioxide in the atmosphere, which is a major greenhouse gas.

The researchers observed this interaction by growing pure cultures of each bacteria in the laboratory, and putting them together in natural seawater and doing nutrient and molecular analyses over a long timeframe.

“A deeper understanding of these essential processes which keep the ocean’s ‘engine’ running will help improve how we look after our waters – and will allow us to better predict how oceans will react in the future to a changing climate with increasing levels of carbon dioxide in the atmosphere”, commented Professor Scanlan, who is Professor in Marine Microbiology in the School of Life Sciences.

“Here we give experimental evidence of a basic concept in ecology, where nutrients need to circulate to maintain a stable ecosystem, like money in the economy! If one of the partners takes too much and doesn’t give back, he himself will suffer the consequences in the long term. The system will self-regulate and always reach a stable state”, commented Dr Christie-Oleza.