The invasive bees have been taking over nesting boxes and killing the threatened species.

19-Jun-2015 11:05 AM EDT, by University of Florida Institute of Food and Agricultural Sciences
favorite_border 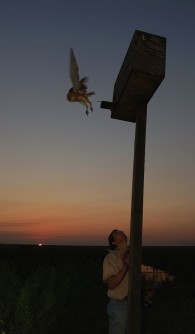 But these beneficial raptors, currently listed as a threatened species, are now being threatened by Africanized honey bees. Swarming as frequently as eight times per year, the invasive bees have been taking over nesting boxes Raid and students have built for the owls, using them as hives, and displacing or even killing the desired raptors.

“In 20 years, we’ve never had any problems with any other critters moving into our boxes,” said Raid, a plant pathologist for UF’s Institute of Food and Agricultural Sciences. “But the Africanized honey bees became established in 2005 and are spreading throughout the peninsula of Florida.”

These Africanized bee swarms also pose a very real threat to agricultural workers, who may unwittingly disturb their sometimes hidden colonies. And so Raid is working with UF entomologist William Kern and graduate student Caroline Efstathion, both from the Ft. Lauderdale Research and Education Center, to build new, attractive homes for the bees – accepting the fact that they are here to stay. The researchers have devised a “push-pull” integrated pest management strategy for dealing with the Africanized honey bee feral swarms. They spray the owl nest boxes with an insecticide that is virtually non-toxic to the owls but is repellent to the bees, pushing them out of the boxes. Additionally, they pull the bees into nearby “swarm traps,” using a synthetic pheromone that honey bee workers use to mark the new hives.

Evolving out of a high school science fair project conducted some 20 years ago, the UF Barn Owl Project promotes the placement of nesting boxes on farms as a way to enhance barn owl populations.

“These birds provide environmentally friendly, low‐cost, sustainable rodent control,” Raid explained. “The pests, particularly cotton rats, mice, and marsh rabbits, can cause over $30 million in damage each year to the area’s 700,000 acres of sugar cane, rice and vegetable crops.”

Thus far, it appears the research efforts are working. Nesting box colonization by the bees has dropped dramatically, while nearly 70 Africanized honey bee swarms have been captured. Raid points out that failing to manage these invasive hybrid honey bees could have endangered this ongoing rodent IPM program.