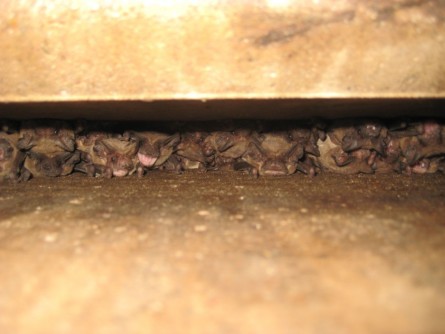 Bats like to hide in cracks and crevices such as this one.

Newswise — COLLEGE STATION, July 18, 2013 – Male bats appear to be the sexy singers of the animal world: they have learned to vocalize in a specific way to attract females, but once they have their attention, they change their tune – literally. They then produce a more creative array of sounds to entertain and keep the females interested, according to new research conducted at Texas A&M University.

Mike Smotherman, associate professor of biology and one of the country’s leading authorities on bat behavior, and colleagues from Florida International University led the study on bat singing and their work is published in Animal Behaviour.

Over a three-year period, the team made recordings of thousands of Mexican free-tailed bats in and around the Texas A&M campus and found that male bats are truly crooners. They produce songs aimed at attracting females to their roosts during mating season, and they must do so quickly because bats tend to fly by in a hurry.

“These bats can fly very fast, almost 30 feet per second,” explains Smotherman. “They only have about one-tenth of a second to get the females’ attention.

“We learned that they use a very specific song to grab the female’s attention as she flies by the roost. Once a bat joins their roost, the males mix up their songs, possibly to keep the females entertained long enough for mating to begin.”

The bat’s romantic song is built from syllables and phrases. The free-tailed bats are unique because they can quickly reorganize their phrases to create different singing styles, Smotherman says.

“The males can be very creative in their singing,” he adds.

Bats aren’t the only type of animal to use such love songs, Smotherman notes. The free-tailed bat’s singing is very similar to some of the most talented songbirds. Among mammals however, singing is rare, he notes.

“Most other animals rely upon visual cues to attract a mate, such as birds having brightly colored feathers,” he adds. “With bats, it’s all about sounds, which may be why bats use singing more than other mammals.”

Bat singing appears to work, at least in Texas. The state is home to some of the largest bat colonies in the world, with tens of millions of bats winging through Texas at sunset. Each bat can consume immense quantities of insects as they try to find a home under bridges, in caves, barns or numerous other places that provide a dark place in which to reside.

The Mexican free-tailed bat is one of the most common bat species, measuring about four inches in length with a wingspan of about 10 to 12 inches. Dark brown in color with rounded ears, the bats are frequently seen in the southwest United States but are also common in Central and South America.

###About Research at Texas A&M University: As one of the world’s leading research institutions, Texas A&M is in the vanguard in making significant contributions to the storehouse of knowledge, including that of science and technology. Research conducted at Texas A&M represents an annual investment of more than $700 million. That research creates new knowledge that provides basic, fundamental and applied contributions resulting in many cases in economic benefits to the state, nation and world.

For more news about Texas A&M University, go to http://tamutimes.tamu.edu/