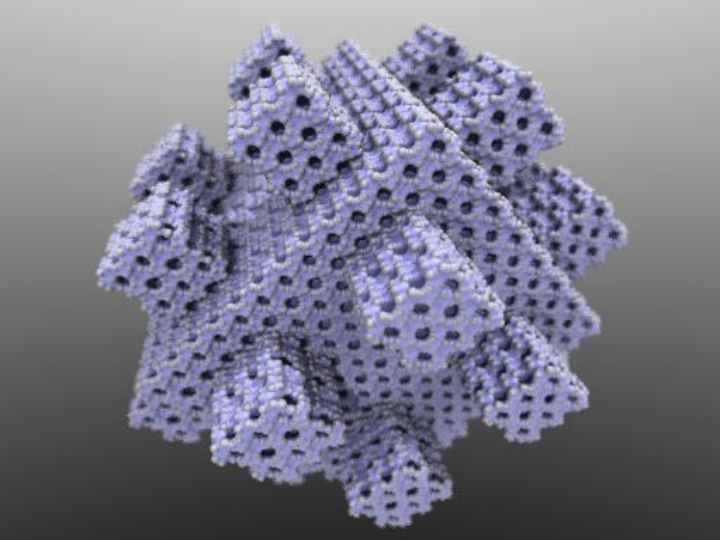 Newswise — Thousands of chemical processes used by the energy industry and for other applications rely on the high speed of catalytic reactions, but molecules frequently are hindered by molecular traffic jams that slow them down. Now an entirely new class of porous catalysts has been invented, using unique fins to speed up the chemistry by allowing molecules to skip the lines that limit the reaction.

This discovery was published in Nature Materials, the leading journal of materials science.

The breakthrough focused on reducing barriers for molecules accessing the interior pores of catalysts, called zeolites - aluminosilicates with pores smaller than a nanometer. Zeolites are widely used in commercial processes as solid catalysts for the production of gasoline and value-added chemicals and other products.

In these applications, chemistry within the zeolite pores first requires molecules to find the small number of openings on the outside surface of catalyst particles. This creates a queue of molecules that must "wait in line" to enter the particle, diffuse to the active site involved in the chemical reaction, and then exit the particle.

One approach to address these transport problems has been to synthesize small nanoparticles. As zeolites become smaller, the amount of surface area exposing the pores increases per amount of catalyst material, which grants increased access for molecules entering the pores. Smaller particles also reduce the internal distance molecules must travel through the particle.

However, the synthesis of these smaller zeolite particles is expensive, and the resulting particles are often too inefficient for practical applications.

Researchers at the University of Houston, led by Jeffrey Rimer, Abraham E. Dukler Professor of chemical and biomolecular engineering, developed a way to induce larger catalyst particles to behave like nanoparticles - that is, to allow molecules to enter, spark a reaction and exit quickly, by growing protrusions, or fins, on the surfaces of catalyst particles. By adding nanoscale fins that protrude from the external surface of large particles, the roughened exterior of the particle significantly increased in surface area, granting molecules increased access and reducing the transport limitations that frequently plague conventional zeolite materials.

"Our new synthesis approach capitalizes on work we have been doing in our group for many years, focused on controlling zeolite crystallization in ways that enable the growth of fins," Rimer said. "This new class of materials bypasses the need to directly synthesize nanoparticles, creating a new paradigm in zeolite catalyst design."

Rimer worked with a team of international experts in materials synthesis, characterization and modeling to demonstrate the capability of finned zeolites to improve the performance of this unique family of solid catalysts. By comparing finned zeolites with conventional catalytic materials, they showed that zeolites with fins lasted almost eight times longer. Rimer said the incorporation of fins leads to shorter internal diffusion pathways and ensures molecules efficiently reach the reaction sites while reducing the propensity of carbon-based species to become immobilized. That build up ultimately deactivates the catalyst.

Xiaodong Zou, professor of inorganic and structural chemistry at Stockholm University, and members of her laboratory conducted advanced 3D electron microscopy characterization to unravel the pore structures of the finned crystals and confirmed that the fins were extensions of the underlying crystal and did not create impediments for internal diffusion.

"It is amazing to see how well all these hundreds of individual nanofins are aligned with the parent crystal," Zou said.

Additional state-of-the-art techniques for characterizing zeolite catalysts in real time were performed at Utrecht University by the research group of Bert Weckhuysen, professor of catalysis, energy and sustainability. These measurements confirmed the exceptional ability of finned zeolites to prolong catalyst activity well beyond that of larger catalysts.

Weckhuysen said the use of operando spectroscopy clearly showed how the introduction of fins lowered the amount of external coke deposits during catalysis. "That substantially increased the lifetime of finned zeolite crystals," he said.

Researchers had expected the fins would perform better than a standard-sized zeolite catalyst, he said. "But we found it was not just a 10% or 20% improvement. It was a tripling of efficiency. The magnitude of the improvement was a real surprise to us."

Additional work at the University of Minnesota by the research group of Paul Dauenhauer, professor of chemical engineering and materials science, and by Michael Tsapatsis, professor of chemical and biomolecular engineering at Johns Hopkins University, confirmed the enhanced mass transport properties of finned zeolites. Using a new method to track molecule diffusion by infrared light, the UM researchers demonstrated that the fins enhanced molecule transport between 100 and 1,000 times faster than conventional particles.

"The addition of fins allows molecules to get inside the channels of zeolites where the chemistry happens, but it also lets molecules quickly get out of the particle, which lets them operate for a much longer period of time," Dauenhauer said.

The discovery has immediate relevance to industry for a host of applications, including the production of fuels, chemicals for plastics and polymers, and reactions that make molecules for food, medicine and personal care products.

"The beauty of this new discovery is its potential generalization to a wide range of zeolite materials, using techniques that are easy to incorporate in existing synthesis processes," Rimer said. "The ability to control the properties of fins could allow for much greater flexibility in the rational design of zeolite catalysts."

This work was supported by and is part of a larger mission of the U.S. Department of Energy, with additional support provided by various international funding agencies.