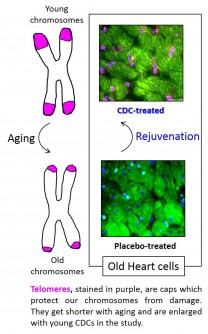 Telomeres, stained in purple, are caps which protect our chromosomes from damage. They get shorter with aging and are enlarged with young CDCs in the study.

Newswise — LOS ANGELES (EMBARGOED UNTIL AUG. 14, 2017, AT 10 A.M. EDT ) – Cardiac stem cell infusions could someday help reverse the aging process in the human heart, making older ones behave younger, according to a new study from the Cedars-Sinai Heart Institute.

“Our previous lab studies and human clinical trials have shown promise in treating heart failure using cardiac stem cell infusions,” said Eduardo Marbán, MD, PhD, director of the Cedars-Sinai Heart Institute and the primary investigator of the study. “Now we find that these specialized stem cells could turn out to reverse problems associated with aging of the heart.”

The study was published today by the European Heart Journal.

In the study, investigators injected cardiosphere-derived cells, a specific type of stem cell, from newborn laboratory rats into the hearts of rats with an average age of 22 months, which is considered aged. Other laboratory rats from the same age group were assigned to receive placebo treatment, saline injections instead of stem cells. Both groups of aged rats were compared to a group of young rats with an average age of 4 months.

Baseline heart function was measured in all rats, using echocardiograms, treadmill stress tests and blood analysis. The group of older rats underwent an additional round of testing one month after receiving cardiosphere-derived cells that came from young rats.

“The way the cells work to reverse aging is fascinating,” Marbán said. “They secrete tiny vesicles that are chock-full of signaling molecules such as RNA and proteins. The vesicles from young cells appear to contain all the needed instructions to turn back the clock.”

Results of those tests show lab rats that received the cardiosphere-derived cells:

“This study didn’t measure whether receiving the cardiosphere-derived cells extended lifespans, so we have a lot more work to do,” said Lilian Grigorian-Shamagian, MD, PhD, co-primary investigator and the first author of the study. “We have much to study, including whether CDCs need to come from a young donor to have the same rejuvenating effects and whether the extracellular vesicles are able to reproduce all the rejuvenating effects we detect with CDCs.”

Since Marbán’s team completed the world’s first cardiac stem cell infusion in 2009, the Cedars-Sinai Heart Institute has made significant contributions to decoding and understanding how cardiac stem cells regenerate damaged heart muscle. The team is studying the use of stem cells to treat patients with Duchenne muscular dystrophy as well as patients with heart failure with preserved ejection fraction, a condition that affects more than 50 percent of all heart failure patients.

General support for Marbán’s laboratory is provided by the National Institutes of Health. The CDCs, manufactured by Capricor Inc. (NASDAQ: CAPR) as their product CAP-1002, have been used in other human clinical trials.

About the Cedars-Sinai Heart Institute

The Cedars-Sinai Heart Institute is internationally recognized for outstanding heart care built on decades of innovation and leading edge research. From cardiac imaging and advanced diagnostics to surgical repair of complex heart problems to the training of the heart specialists of tomorrow and research that is deepening medical knowledge and practice, the Cedars-Sinai Heart Institute is known around the world for excellence and innovations.