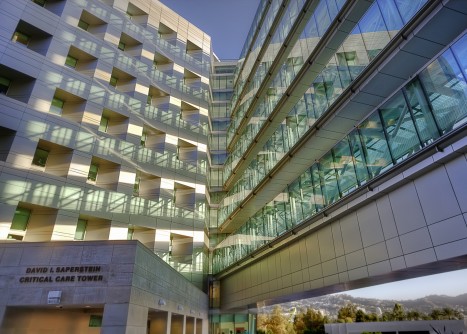 Cedars-Sinai Medical Center has earned a five-star rating from the Centers for Medicare and Medicaid Services.

Newswise — LOS ANGELES (Feb. 19, 2020) -- Cedars-Sinai Medical Center has earned a five-star hospital rating from the Centers for Medicare and Medicaid Services for the third year in a row -- the highest distinction offered by the federal agency.

Found on Medicare's Hospital Compare website, the ratings range from one to five stars and are meant to provide consumers with an easily understandable way to compare hospital performance.

This year's top honor for Cedars-Sinai was driven by a low rate of complications after hip or knee replacement surgery, high marks for patient experience and continued strong performance in mortality measures that track the rate of patient survival 30 days after hospitalization for common conditions such as pneumonia.

"These achievements reflect not only our commitment to drive improvements in clinical quality but to also sustain those gains once a goal has been achieved," said Rekha Murthy, MD, vice president of Medical Affairs and associate chief medical officer.

She pointed to a recent quality-improvement project in antibiotic stewardship that focused on getting the right antibiotics and dosage to the right patient at the right time for the right duration. The project helped reduce rates of infections from C. difficile, or Clostridium difficile, a bacterium that causes inflammation of the colon that can be life-threatening. Though the formal project has concluded, medical center teams continue to monitor related data and train new clinicians around appropriate antibiotic use.

Although not reflected in the current rating, Murthy said that Cedars-Sinai has been laying the groundwork for future quality improvement in complex areas such as sepsis. Treating sepsis can be challenging because many of the signs and symptoms of sepsis-such as fever and difficulty breathing-are the same as in other conditions, making sepsis hard to diagnose in its early stages.

Early identification is important so that clinicians can intervene rapidly by ordering lab tests, antibiotics and administering fluids to provide the best opportunity for a successful outcome.

"We've enlisted expertise from our data intelligence team to develop alerts for early signs that a patient might be at risk of developing sepsis by monitoring vital signs and other information from the electronic medical record," Murthy said. "This can trigger rapid testing and appropriate treatment with antibiotics and fluids."

Read more on the Cedars-Sinai blog: When Should I Take Antibiotics?