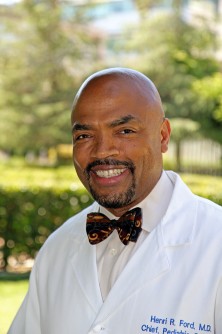 CHLA Vice President and Surgeon-in-Chief Henri R. Ford, MD, MHA, FACS, FAAP, also serves as professor of Surgery and vice dean for Medical Education at the Keck School of Medicine of the University of Southern California. 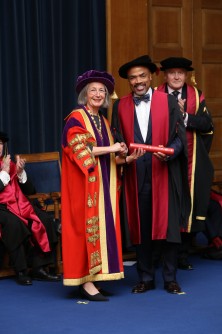 Newswise — LOS ANGELES — In a storied medical career filled with accolades and achievements, Children’s Hospital Los Angeles Vice President and Surgeon-in-Chief Henri R. Ford, MD, MHA, FACS, FAAP, has been recognized for two extraordinary honors: He was recently elected as president of the American Pediatric Surgical Association and he achieved one of the rarest and most prestigious international milestones for a surgeon—an Honorary Fellowship to the Royal College of Surgeons of England (RCSEng), the organization’s highest award.

“I was truly humbled and appreciative of the honor and it allowed me to pause and reflect on my journey and how blessed I have been to have been guided by my mentors and role models,” says Ford, CHLA’s first-ever honorary fellow to be admitted by the Royal College. A capacity crowd filled the auditorium at the Royal College’s headquarters in London, including Ford’s wife, Donna, his son, Alex, and his daughter, Arielle. “Having my entire family there with me gave this honor special significance.”

The mission of the Royal College, founded in 1800, is to enable “surgeons to achieve and maintain the highest standards of surgical practice and patient care.” The selection process for the Honorary Fellowship is especially rigorous, since the number of living medically qualified Honorary Fellows at any one time shall not exceed 150 and the award is only bestowed on surgeons of international renown. “That really puts it all in perspective,” says Ford, who also serves as professor of Surgery and vice dean for Medical Education at the Keck School of Medicine of the University of Southern California (USC).

As the 48th elected president of the APSA, Ford’s term will run through May 2018. “It is a great honor to have been elected to this position,” says Ford, who is also a member of the Board of Regents of the American College of Surgeons. “I look forward to executing APSA’s new strategic plans, as we seek to improve access to quality and safe surgical care for all children across the globe.”

Paul S. Viviano, president and chief executive officer of Children’s Hospital Los Angeles, noted that both honors are indicative of Ford’s leadership in the field of pediatric surgery at home and abroad. “It is a moving moment to be honored not just in the country in which you practice, but also to be honored internationally for your contributions to medicine,” Viviano says. “These acknowledgements are a credit to his incredible expertise and commitment to the improvement of children’s health in Los Angeles and around the world.”

Ford’s distinction is well recognized among his colleagues who proudly attest to his expertise, leadership and passion. “Working alongside Henri is one of my great privileges at the Keck School,” said Rohit Varma, MD, MPH, dean of the Keck School and director of the USC Roski Eye Institute. “He practices with true devotion to medicine, inspiring faculty and students alike to strive for excellence for the greater good. We are delighted to see him recognized for this on both a national and international scale.”

During the Royal College ceremony, which took place in March,  officials described Ford as a world-renowned surgeon whose admittance represents the cumulative impact of Dr. Ford’s accomplishments as a surgeon and a leader, says Inma Blanes, a spokesperson for the Royal College. The Honorary Fellowship is awarded to surgeons in recognition of international distinction in surgery, advances in the subject or preeminence in the field in their own country.

Su-Anna Boddy, MS, FRCS, council member for the RCSEng, introduced Ford at the ceremony and spoke of his accomplishments. Ford, she said, “returns regularly to his home country of Haiti to teach, lead surgical teams and assist in developing surgical systems, which the island nation historically has lacked.” Ford performs pediatric surgeries several times a year in his homeland. In May 2015, he led a CHLA and Keck Medicine of USC team that made medical history by completing the first separation of conjoined twins in Haiti, a procedure that was followed by CBS News. “They are doing very well,” Ford says of the twins.

He also has been crucial in working with leaders to develop the country’s critical care and trauma network. Ford was also acknowledged by the Royal College for playing “a prominent role in organizing and leading medical teams in response to the catastrophic 2010 earthquake in Haiti.”

Born in Haiti, Ford, along with his family, fled Haiti’s oppressive regime and came to the U.S. when he was 13 years old. He earned a bachelor’s degree in international affairs from Princeton University, where he was introduced to his wife. “She has been with me every step of the way,” he says. In 1984, he received his medical degree from Harvard Medical School in Boston, and trained in general surgery at Weill Cornell Medical College in New York City. He completed his pediatric surgical training at Children's Hospital of Pittsburgh. Prior to joining Children’s Hospital Los Angeles in 2005, Ford was professor and chief of the Division of Pediatric Surgery and surgeon-in-chief at Children’s Hospital of Pittsburgh and the University of Pittsburgh School of Medicine. Ford is an international authority on necrotizing enterocolitis, a life-threatening disease in premature newborns, and he heads up a lab at The Saban Research Institute of CHLA dedicated to the study of this medical condition. His scholarship in the specialty, as well as in pediatric trauma and appendicitis, includes 154 peer-reviewed publications, 36 manuscripts, 30 book chapters and 294 abstracts for presentation.

Clare Marx, CBE, DL, PRCS, president of the Royal College of Surgeons, formally awarded Ford the honor. “It is a career highlight,” Ford says of the recognition. Reflecting on his experience, Ford marvels at the opportunity he had to visit the Royal College’s Hunterian Museum, named after legendary Scottish surgeon John Hunter. “It is filled with historic relics and instruments from the surgical world. John Hunter is one of the greatest anatomists of all time and his collections are housed in the Royal College. To be in that building and to see his work before the ceremony—you knew you were in an institution that recognized the accomplishment of a surgical giant. To be acknowledged against that backdrop makes you feel especially proud.”

Children's Hospital Los Angeles has been named the best children’s hospital in California and among the top 10 in the nation for clinical excellence with its selection to the prestigious U.S. News & World Report Honor Roll. Children’s Hospital is home to The Saban Research Institute, one of the largest and most productive pediatric research facilities in the United States. Children’s Hospital is also one of America's premier teaching hospitals through its affiliation with the Keck School of Medicine of the University of Southern California since 1932. For more information, visit CHLA.org. Follow us on Twitter, Facebook, YouTube, LinkedIn and Instagram, or visit the institution’s child health blog (www.WeTreatKidsBetter.org) or its research blog (www.ResearCHLABlog.org). 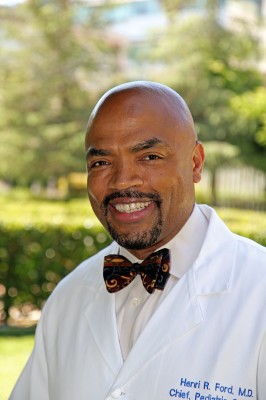 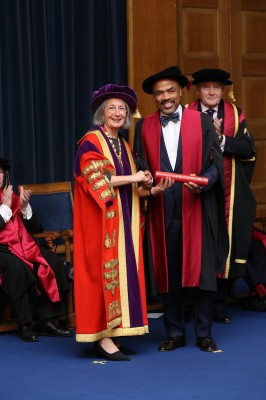