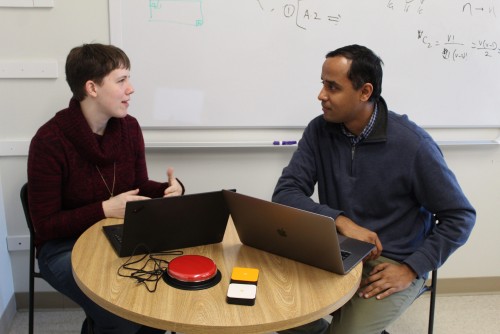 Newswise — KINGSTON, R.I. – Dec. 17, 2020 – The ease of accessing your computer or smartphone is something you probably take for granted. But for people with upper extremity impairment, the act of logging in to their devices is anything but simple.

“All our devices by default require some kind of password, biometric assistance, or other credential verification process,” said Krishna Venkatasubramanian, an assistant professor of computer science at the University of Rhode Island. “Most of these things require your hands, but people with upper extremity impairment many times cannot use their shoulders, arms, hands or fingers as dexterously as the rest of us can. So, this can introduce a lot of problems for them to just log into their machines.”

Backed by a three-year, $500,000 grant from the National Science Foundation, Venkatasubramanian is researching computer authentication problems faced by people with upper extremity impairment with a goal of developing software that allows users to more easily access their devices. Venkatasubramanian is collaborating with TechACCESS of Rhode Island, which provides assistive technology services for people with disabilities.

“TechACCESS’ mission is to utilize technology to help individuals gain access to things that many people take for granted: communication, learning, literacy, correspondence, and many other things,” said Kelly Charlebois, executive director of TechACCESS. “This project of helping individuals with upper extremity impairment access and utilize device security features fits into that perfectly.”

Upper extremity impairment can be caused by a variety of factors, including stroke, spinal cord injury, degenerative diseases such as multiple sclerosis, and movement disorders like cerebral palsy. People with impairment experience various levels of severity affecting their range of motion, strength, endurance and accuracy with the movement of their shoulders, arms, hands and fingers.

Research has mostly overlooked the experiences and needs of users with such impairments, focusing more on people with vision impairment, cognitive disabilities or who use a wheelchair, Venkatasubramanian said.

“I was quite surprised that if you talk about physical disability associated with the upper body, there was almost no work,” he said. “There are research papers that talk in broad terms that this community is going to have difficulties, but nobody has looked at it in any more detail and definitely nobody has proposed any solutions.

“The goal of this project is to kickstart a lot of the solutions that could eventually be integrated into consumer electronics and products to better serve this population,” he added. “But you still have to study the problems carefully and not make assumptions about what people with UEI can do when they log into their computers.”

Second-year Ph.D. student Brittany Lewis, who has experience in software engineering and an interest in security and accessibility, has been working on the project, conducting interviews of people with upper extremity impairment, helping undergraduate researchers, programming, and writing research papers.

“I was instantly drawn to the project because it was an intersection of a lot of different areas that interest me and seemed like a research area where I could have an impact,” she said.

Venkatasubramanian and Lewis interviewed eight people with different levels of impairment to understand their experiences and the scope of the problems they face with authentication. The research paper Lewis has written from the interviews, “‘I…Got my Nose-Print. But It Wasn’t Accurate’: How People with Upper Extremity Impairment Authenticate on their Personal Computing Devices,” has been accepted for publication at the 2021 ACM CHI Conference on Human Factors in Computing Systems, the premier international conference on human-computer interaction.

The interviews showed that users had difficulties in all stages of accessing their devices, from setting up passwords and PINs, to using those methods to log in, to resolving log-in problems like entering the wrong password. Nearly all the users developed workarounds to help them log in. Some sought help from a friend to enter a password, some used biometrics, some simplified their passwords or PINs to make entry easier. Some disabled authentication all together

“Every person is different, but overall we can say they value usability over security,” he said. “We want to avoid that. We need to build something that is more inclusive.”

Venkatasubramanian is looking at a variety of solutions that would leverage assistive technologies commonly used by people with upper extremity impairment.

His team is testing eye-gaze trackers with test subjects to aid direct password or PIN entry or for use in biometrics, including exploring that number-pad layout that works best. The project is also looking at ways for users to share log-in credentials with caregivers, which was mentioned by several people who were interviewed. For example, a “token-based” authentication system could use a Bluetooth beacon to allow a caregiver within a certain radius of the user to access the device.

“We’re allowing the community to guide us to what is important,” he said. “We want to really gear our approach to the population that we’re trying to help.”