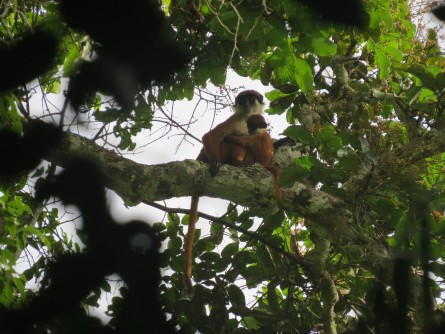 The first photograph ever taken of Bouvier’s red colobus (an adult female and infant). The image was taken in the Republic of Congo’s Ntokou-Pikounda National Park in early March 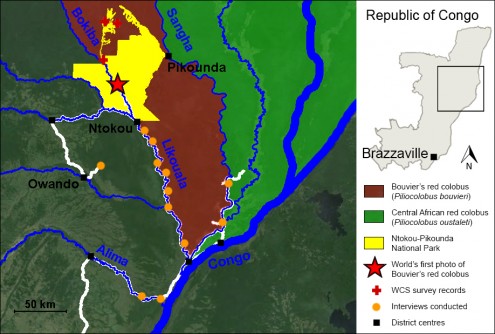 A map of Ntokou-Pikounda National Park, along with survey data and the location where the first image of Bouvier’s red colobus was taken.

Newswise — Two primatologists working in the forests of the Republic of Congo have returned from the field with a noteworthy prize: the first-ever photograph of the Bouvier’s red colobus monkey, a rare primate not seen for more than half a century and suspected to be extinct by some, according to WCS (the Wildlife Conservation Society).

The elusive primate was recently photographed by independent researchers Lieven Devreese and Gaël Elie Gnondo Gobolo within Ntokou-Pikounda National Park, a 4,572-square-kilometer (1,765-square-mile) protected area created on advice from WCS in 2013 to safeguard gorillas, chimpanzees, elephants, and other species.

The field researchers set off in February 2015 to try to photograph Bouvier’s red colobus and establish the present distribution of this unique primate species in the Republic of Congo. Guided by local people familiar with red colobus vocalizations and behavior, the team found a group of red colobus in the swamp forests along the Bokiba River in the Ntokou-Pikounda National Park. “Our photos are the world’s first and confirm that the species is not extinct,” Devreese said.

WCS helped in the search for Bouvier’s red colobus with logistical support and provided the unpublished survey records of red colobus monkeys in Northern Congo.

“We’re very pleased indeed that Lieven and Gaël were able to achieve their objective of not only confirming that Bouvier’s red colobus still exists, but also managing to get a very clear close-up picture of a mother and infant,” said WCS’s Dr. Fiona Maisels. “Thankfully, many of these colobus monkeys live in the recently gazetted national park and are protected from threats such as logging, agriculture, and roads, all of which can lead to increased hunting.”

Bouvier’s red colobus (Piliocolobus bouvieri) is a species of monkey endemic to the Republic of Congo, about which virtually nothing is known. It has been considered a subspecies of a larger colobus taxonomic group in the past, but the most recent treatment lists it as a full species.

The species was first described in 1887 and is only known from a couple of museum specimens collected from three localities over 100 years ago. The authors of a book written in 1949 mention that the species occurs in the swamp forests between the lower Likouala and Sangha Rivers, as well as along the Alima River farther to the south. The last unverified sightings of Bouvier’s red colobus monkey occurred in the 1970s.

Recent surveys by WCS had previously recorded red colobus in what is now Ntokou-Pikounda National Park in 2007 and 2014, but they were very rarely encountered and no photograph had been taken. The new sighting and photograph confirm the presence of this threatened primate in Northern Congo. However, red colobus monkeys (there are several species) typically do not flee from humans but look down at them from the trees, an unfortunate behavioral characteristic that has led to them becoming very rare wherever hunters are active. They are highly threatened by the growing demand for bushmeat in the region, a trade that also threatens larger primates such as gorillas and chimpanzees.

James Deutsch, Vice President for Conservation Strategy at WCS, commented: “Confirmation that Bouvier’s red colobus still thrives in the this area reminds us that there remain substantially intact wild places on Earth, and should re-energize all of us to save them before it is too late.”

About the Wildlife Conservation Society (WCS)MISSION: WCS saves wildlife and wild places worldwide through science, conservation action, education, and inspiring people to value nature. VISION: WCS envisions a world where wildlife thrives in healthy lands and seas, valued by societies that embrace and benefit from the diversity and integrity of life on earth. To achieve our mission, WCS, based at the Bronx Zoo, harnesses the power of its Global Conservation Program in more than 60 nations and in all the world’s oceans and its five wildlife parks in New York City, visited by 4 million people annually. WCS combines its expertise in the field, zoos, and aquarium to achieve its conservation mission. Visit: www.wcs.org; http://www.facebook.com/TheWCS; http://www.youtube.com/user/WCSMedia Follow: @thewcs.

Lieven Devreese (27) is an independent researcher with experience on several projects in Central Africa. For his Master thesis, he studied agile mangabeys in the Central African Republic in 2010. Devreese hopes to start a PhD project soon with a subject on phylogeography of monkeys in the Congo Basin.

Gaël Elie Gnondo Gobolo (25) is a student at the Marien-Ngouabi University in Brazzaville. He grew up in the village of Bomassa, close to the Nouabale-Ndoki National Park in the Republic of Congo. Gnondo Gobolo conducted his bachelor’s thesis in collaboration with WCS working in this national park in the north of the country. 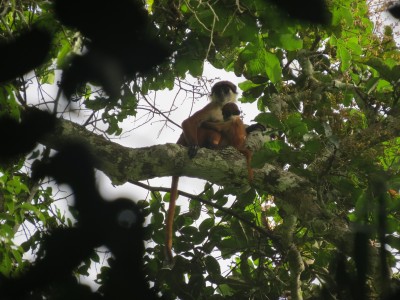 Caption: The first photograph ever taken of Bouvier’s red colobus (an adult female and infant). The image was taken in the Republic of Congo’s Ntokou-Pikounda National Park in early March 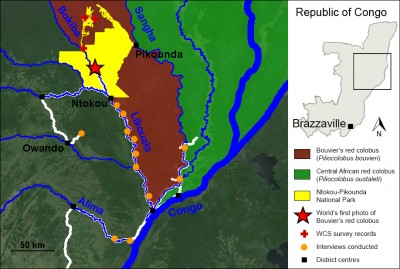 Caption: A map of Ntokou-Pikounda National Park, along with survey data and the location where the first image of Bouvier’s red colobus was taken.