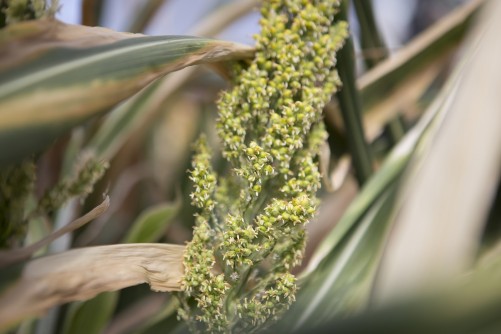 Sorghum is an ideal crop to meet the predicted doubling of global demand for food and fuel by 2050 with less impact on the environment.

“The Gates Foundation recognizes that most smallholder farmers rely on small plots of land for food and income. This grant will help increase the productivity of a crop that can, in a sustainable and effective way, reduce hunger and poverty and make communities economically stronger and more stable over the long term,” said James Carrington, Ph.D., president of the Danforth Center.

The funding broadens the impact of the TERRA-REF program launched in June 2015 by the Danforth Center with support from the U.S. Department of Energy’s Advanced Research Projects Agency-Energy (ARPA-E). TERRA-REF aims to optimize breeding strategies for improving the yield and stress tolerance of sorghum (Sorghum bicolor), a leading bioenergy feedstock crop in the United States, but also a critical source of nutrition for millions of people living in Sub-Saharan Africa.

The Sorghum Genomics Toolbox, led by the Danforth Center with partners at ICRISAT (India), CERAAS-ISRA (Senegal), CIRAD (France), EIAR (Ethiopia), HudsonAlpha Institute for Biotechnology, Kansas State University, University of Arizona, George Washington University, and NRGene (Israel), is employing cutting-edge technologies to sequence and analyze grain sorghum genomes, capture tens of millions of phenotypic observations over the course of a growing season, and accelerate breeding efforts by connecting phenotypes to genotypes in the field.

“Initially we launched the TERRA-REF project to gain a greater understanding of the phenotypic and genomic variation of bioenergy sorghum, and to lay the foundation for genomics-enabled breeding strategies for U.S. sorghum bioenergy feedstock production, but the same strategies are directly extendable to food security crops,” said Todd Mockler, Ph.D., Geraldine and Robert Virgil Distinguished Investigator, Danforth Center. “I’m grateful to the Bill & Melinda Gates Foundation for recognizing the need to extend the application of advanced genomics and phenomics technologies to food crops that will benefit millions of people living in the developing world.”

Sorghum is a member of the grass family and is grown worldwide. It is of interest, not only because it is a staple crop in Sub-Saharan Africa, but because grain sorghum yields have been flat or declining due to the lack of sufficient investment in the development of new improved varieties. Sorghum is very resilient to drought and heat stress. Natural genetic diversity in sorghum makes it a promising system for identifying stress-resistance mechanisms in grasses that may have been lost during the domestication of related cereal crops. It is among the most efficient crops in conversion of solar energy and use of water, making it an ideal crop to target for improvement to meet the predicted doubling of global food demand by 2050.

“The National Sorghum Producers is excited to see the additional investment into sorghum research and breeding, which will help farmers around the world as they continue to deal with the challenges of advancing sorghum genetics to address climate variability and the need for increased food sustainability,” said Tim Lust, chief executive officer of the National Sorghum Producers.

About The Donald Danforth Plant Science CenterFounded in 1998, the Donald Danforth Plant Science Center is a not-for-profit research institute with a mission to improve the human condition through plant science. Research, education and outreach aim to have impact at the nexus of food security and the environment, and position the St. Louis region as a world center for plant science. The Center’s work is funded through competitive grants from many sources, including the National Institutes of Health, U.S. Department of Energy, National Science Foundation, and the Bill & Melinda Gates Foundation. Follow us on Twitter at @DanforthCenter. ###