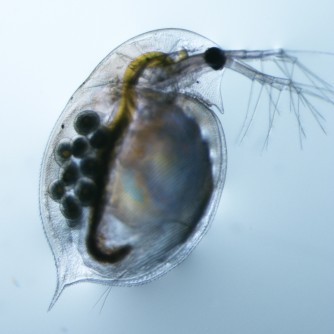 Newswise — BLOOMINGTON, Ind. -- Ground-breaking new research from a team of evolutionary biologists at Indiana University shows for the first time how asexual lineages of a species are doomed not necessarily from a long, slow accumulation of new mutations, but rather from fast-paced gene conversion processes that simply unmask pre-existing deleterious recessive mutations.

Geneticists have long bet on the success of sexual reproduction over asexual reproduction based in a large part on the process known as Muller's ratchet, the mechanism by which a genome accrues deleterious and irreversible mutations after the host organism has lost its ability to carry out the important gene-shuffling job of recombination.

The new work from the laboratory of IU Distinguished Professor of Biology Michael Lynch instead indicates that most deleterious DNA sequences contributing to the extinction process are actually present in the sexual ancestors, albeit in recessive form, and simply become exposed via fast-paced gene conversion and deletion processes that eliminate the fit genes from one of the parental chromosomes.

After sequencing the entire genomes of 11 sexual and 11 asexual genotypes of Daphnia pulex, a model organism for the study of reproduction that is more commonly known as the water flea, the team discovered that every asexual genotype shared common combinations of alleles for two different chromosomes transmitted by asexual males without recombination. Asexual males then spread the genetic elements for suppressing meiosis, the type of cell division necessary for sexual reproduction, into sexual populations. The unique feature of this system is that although females become asexual, their sons need not be, and instead have the ability to spread the asexuality gene to sexual populations -- in effect, by a process of contagious asexuality.

"One might think of this process as a transmissible asexual disease," Lynch said. Exposure of pre-existing, deleterious alleles is, incidentally, a major cause of cancer, he added.

In another remarkable finding from the genome-wide survey for asexual markers, the team was also able to determine the age of the entire asexual radiation for D. pulex. Just a few years ago biologists were guessing that asexual daphnia lineages could be millions of years old, and most recent estimates put it between 1,000 years and 172,000 years. But new calculations for the molecular evolutionary rates of the two chromosomes implicated in asexuality date the establishment and spread of the asexual lineage to just 1,250 years ago. Some current asexual lineages, in fact, were only decades old, younger than Lynch himself. "A pond of asexual daphnia may go extinct quite rapidly owing to these deleterious-gene-exposing processes, but the small chromosomal regions responsible for asexuality survive by jumping to new sexual populations where they again transform the local individuals to asexuality by repeated backcrossing," Lynch said. "Soon after such a transformation, the processes of gene conversion and deletion restarts, thereby again exposing resident pre-existing mutations leading to another local extinction event. As far as the sexual populations are concerned, asexuality is infectious, spreading across vast geographic distances while undergoing no recombination."

Lynch said it remains unclear what the ultimate fate of the entire sexual species will be and whether all sexual populations will be eventually displaced by the westward march of asexual lineages.

The team from the IU College of Arts and Sciences' Department of Biology used sexual and asexual daphnia sourced from ponds and lakes in six states and two Canadian provinces. The new work supported past research showing that a westward expansion of asexual lineages began in northeastern North America.

The team was even able to determine that the genetic cause of asexuality in D. pulex -- those meiosis-suppressing genetic elements -- originated from a sister species, Daphnia pulicaria, either through introduction of those elements previously segregated in D. pulicaria or through a unique hybridization event that brought on the change. "It is the contents of two non-recombining chromosomes derived from D. pulicaria that induce asexuality after male transmission of the otherwise asexual lineages," Lynch said.

Given that the gradual accumulation of new mutations -- Muller's ratchet -- is less of a contributor for asexual decline than the Lynch team's findings on simple loss of heterozygosity and exposure of pre-existing, deleterious alleles, evolutionary biologists will now need to look at the persistence of other asexual genomes in a new way, Lynch believes. (If an individual has two different forms of a gene on a chromosome, that individual is heterozygous; two of the same gene forms, or alleles, at a specific location makes the individual homozygous.) "Population-genomic insights into the evolutionary origin and fate of obligately asexual Daphnia pulex," is available in early online editions of Proceedings of the National Academy of Sciences. Co-authors with Lynch were postdoctoral research associates Brian D. Eads, Abraham E. Tucker and Sen Xu and Ph.D. student Matthew S. Ackerman. Funding for the work was provided by the National Science Foundation and the National Institutes of Health.