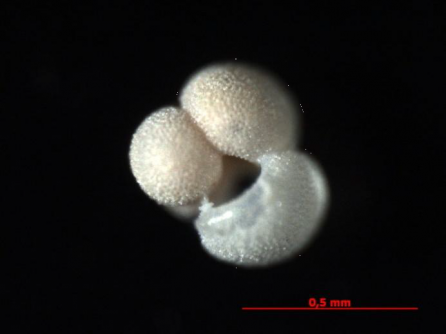 Reflected light image of the shell of a fossil planktic foraminifera Globigerinoides ruber. The boron isotopic composition of the shells of this species was used to reconstruct atmospheric CO2, from 1 million years ago, in this study.

Newswise — A decline in atmospheric carbon dioxide (CO2) levels led to a fundamental shift in the behaviour of the Earth’s climate system around one million years ago, according to new research led by the University of Southampton.

A team of international scientists used new geochemical measurements, coupled with a model of the ‘Earth system’, to show that the growth and changing nature of continental ice sheets, approximately a million years ago, coincided with a cascade of events that ultimately lowered atmospheric CO2 during glacial intervals – periods when the Earth experienced extreme cold.

The researchers have shown this change was key in triggering what is known as the Mid-Pleistocene Transition (MPT), which lasted around 400,000 years. The MPT had long lasting effects on the frequency at which the Earth transitioned between periods of warm and cold climate, (the ‘ice age cycles’).

Findings of the study are published in the journal Proceedings of the National Academy of Sciences.

For much of the last three million years the Earth’s climate naturally cycled every 40,000 years from frigid glacial intervals, where continental ice covered much of North America and Europe, to warm interglacial climates like the pre-industrial period, when Europe and North America were largely ice free.

These ice age cycles, also known as Milkovitch Cycles after the Serbian mathematician who discovered them, are paced by regular changes in the way the Earth orbits the sun and spins on its axis, caused by the gravitational pull of the other planets in our solar system. Around one million years ago, during the MPT, the period of the cycles abruptly changed to every 100,000 years. However, this transition is not accompanied by a change in the nature of the orbital cycles and so represents a significant challenge to the Milkovitch Theory to explain ice age cycles.

Dr Tom Chalk, a post-doctoral fellow at the University of Southampton, who jointly led the study explains: “We know from bubbles of the ancient atmosphere trapped in Antarctic ice cores that changes in atmospheric CO2 accompanied the more recent ice age cycles. CO2 was low when it was cold during the glacials and it was higher during the warm interglacials – in this way it acted as a key amplifier of the relatively minor climate forcing from the orbital cycles. Unfortunately, the ice core records only stretch back to around 800,000 years ago and so do not go over this key transition interval. In order to better understand the cause of the MPT, we needed a way to reconstruct CO2 further back in time.”

To do this, the team used a technique based on the boron isotopic composition of the shells of ancient marine fossils called ‘foraminifera’. These are tiny marine plankton that live near the sea surface and the chemical make-up of their microscopic shells records the environmental conditions of the time when they lived, millions of years ago.

Professor Gavin Foster, of the University of Southampton, continues: “From these boron isotope measurements we were able to recover a snapshot of the variability in atmospheric CO2 around 1.1 million years ago. We were able to show, for the first time that, just as in the ice core record, CO2 and climate varied in tandem. There were two main differences however: firstly, during the glacials before the MPT, CO2 did not drop as low as it did in the ice core record after the MPT, remaining about 20-40 parts per million (ppm) higher. Secondly, the climate system was also more sensitive to changing CO2 after the MPT than before.”

The Earth’s climate system is very complex and the various interconnections between its numerous processes and feedbacks are best understood within a computational modelling framework. Dr Mathis Hain, a NERC Independent Research Fellow at the University of Southampton, added: “In order to determine why glacial-aged CO2 declined by 20-40 ppm across the MPT we used a biogeochemical model. Our best model fit to the available data suggests that the reduced drawdown of CO2 during glacial periods prior to the MPT was due to a reduced flux of dust to the Southern Ocean at this time. A higher dust flux during more recent glacial intervals brought much needed iron to that region, stimulating primary productivity and phytoplankton growth, locking more CO2 away in the deep ocean. We do not know yet exactly why the climate became dustier after MPT, but it is likely due to the ice sheets getting bigger and changing atmospheric circulation.”

Over the last 20 years or so there have been many different ideas to explain this important climate transition, some have called on changes in the nature of the ice sheets themselves, others on atmospheric CO2 change. What the team’s new data and modelling show is that what happened in reality was a mix of both types of ideas – the climate and the ice sheets became more sensitive, this led to bigger ice sheets, and this in turn led to enhanced CO2 drawdown. As with many facets of the Earth system these changes acted in a vicious circle, feeding on one another, ultimately sustaining longer glacial periods following the MPT.

There is still much that remains to be found out about how the Earth system responds to climate forcing. This study, however, illustrates the exquisite coupling that exists in the Earth System between climate change, ice-sheet mass, and the polar ocean mechanisms that regulate natural CO2 change.