Called VENUS, the device will give scientists an unprecedented ability to study how molecules form in the icy clouds of space. 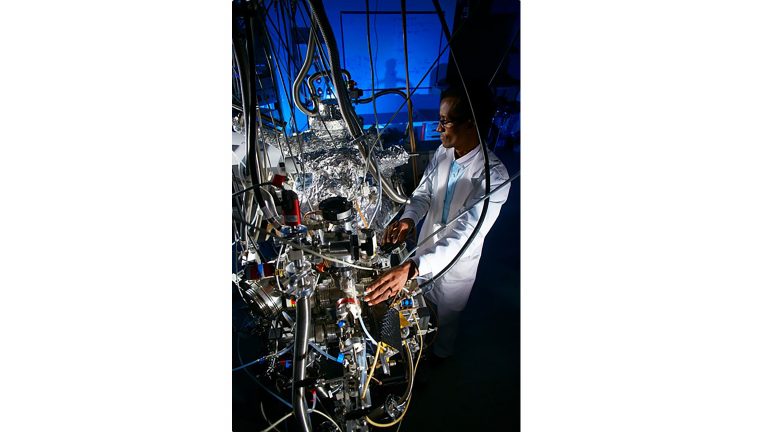 Abdellahi Sow uses the VENUS apparatus, which offers researchers insight into how life can form in space.

Newswise — WASHINGTON, December 15, 2020 -- A device developed by scientists at the CY Cergy Paris University and Paris Observatory promises insight into how the building blocks of life form in outer space.

In an article published in Review of Scientific Instruments, by AIP Publishing, the scientists detail how VENUS -- an acronym of the French phrase “Vers de Nouvelles Syntheses,” which means “toward new syntheses” -- mimics how molecules come together in the freezing darkness of interstellar space.

“We try to simulate how complex organic molecules are formed in such a harsh environment,” said Emanuele Congiu, one of the authors and an astrophysicist at the observatory. “Observatories can see a lot of molecules in space. What we do not understand yet, or fully, is how they formed in this harsh environment.”

VENUS has a chamber designed to replicate the strong vacuum of space, while holding a frigid temperature that is set lower than minus 400 degrees Fahrenheit (10 kelvins). It uses up to five beams to deliver atoms or molecules onto a tiny sliver of ice without disturbing that environment.

That process, Congiu said, replicates how molecules form on the ice that sits atop tiny dust particles found inside interstellar clouds. VENUS is the first device to do the replication with more than three beams, which lets researchers simulate more complicated interactions.

Over the past 50 years, nearly 200 different molecular species have been discovered in the star-forming regions of space. Some of them, the so-called “prebiotic species,” are believed by scientists to be involved in the processes that lead to the early forms of life.

A key use of the VENUS device will be working in concert with scientists who discover molecular reactions in space but need a fuller understanding of what they have observed. It specifically mentions NASA’s launch of the James Webb Space Telescope, which is scheduled for 2021. The largest and most powerful space telescope ever launched, it is expected to dramatically expand scientists’ knowledge of the universe.

“What we can do in the lab in one day takes thousands of years in space,” Congiu said. “Our work in the lab can complement the wealth of data that comes from the space observatories. Otherwise, astronomers would not be able to interpret all of their observations. Researchers who make observations can ask us to simulate a certain reaction, to see if what they think they see is real or not.”

The article, "A new multi-beam apparatus for the study of surface chemistry routes to formation of complex organic molecules in space," is authored by Emanuele Congiu, Abdellahi Sow, Thanh Nguyen, Saoud Baouche, and Francois Dulieu. The article appears in Review of Scientific Instruments on Dec. 15, 2020 (DOI: 10.1063/5.0018926) and can be accessed at https://aip.scitation.org/doi/10.1063/5.0018926.