19-May-2016 8:00 AM EDT, by Michigan Medicine - University of Michigan contact patient services 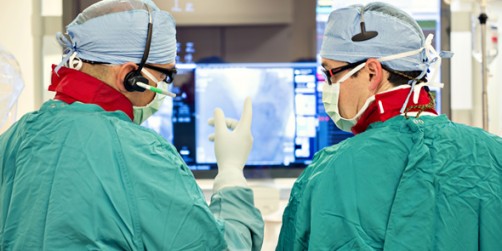 Newswise — Doctors worried about dangerous blood clots in patients undergoing a coronary artery procedure— such as angioplasty to treat a heart attack — will often administer antiplatelet therapy to head off complications.

But pre-procedural use of antiplatelet agents P2Y12 inhibitors is becoming less routine, according to registry results presented by the University of Michigan Frankel Cardiovascular Center at EuroPCR, the European Association of Percutaneous Cardiovascular Interventions conference in Paris.

Over a 30-month period, the initial administration of P2Y12 inhibitors in the pre-procedural time period declined from 49.3 percent to 24.8 percent across a consortium of 47 Michigan hospitals.

More and more, doctors are administering the initial dose of P2Y12 inhibitor therapy during or after the procedures and their patients have remained protected against stent thrombosis, bleeding, the need for transfusion and death.

Researchers studied 74,053 patients undergoing PCI between January 2013 through June 2015 at hospitals that contribute data to the Blue Cross Blue Shield of Michigan Cardiovascular Consortium (BMC2). There were no significant differences in in-hospital outcomes between patients treated with pre-procedural P2Y12 inhibitors compared to those who were not treated with pre-procedural P2Y12 inhibitor therapy, the data showed.

Importantly, these findings remained consistent in the subgroup of patients undergoing PCI who presented with acute coronary syndrome, from unstable angina to the most damaging heart attacks called STEMI.

Historically clopidogrel has been the most widely used P2Y12 inhibitor. Its limitations, such as response variability, are well known, however.

Partly due to these limitations, two new P2Y12 inhibitors, ticagrelor and prasugrel, were developed and have a faster onset of action and achieve higher levels of platelet inhibition than clopidogrel.

The optimal timing of P2Y12 inhibitor administration relative to PCI remains a topic of continued research and ongoing debate, says Devraj Sukul, M.D., a University of Michigan cardiology fellow who presented the study in Paris.

“While more work is needed to determine the optimal timing in patients undergoing PCI, the current approach of increasingly reserving the use of these drugs after the patient enters the cath lab appears to be as effective and safe as pre-procedural administration,” he says.