Does selfishness evolve? Ask a cannibal 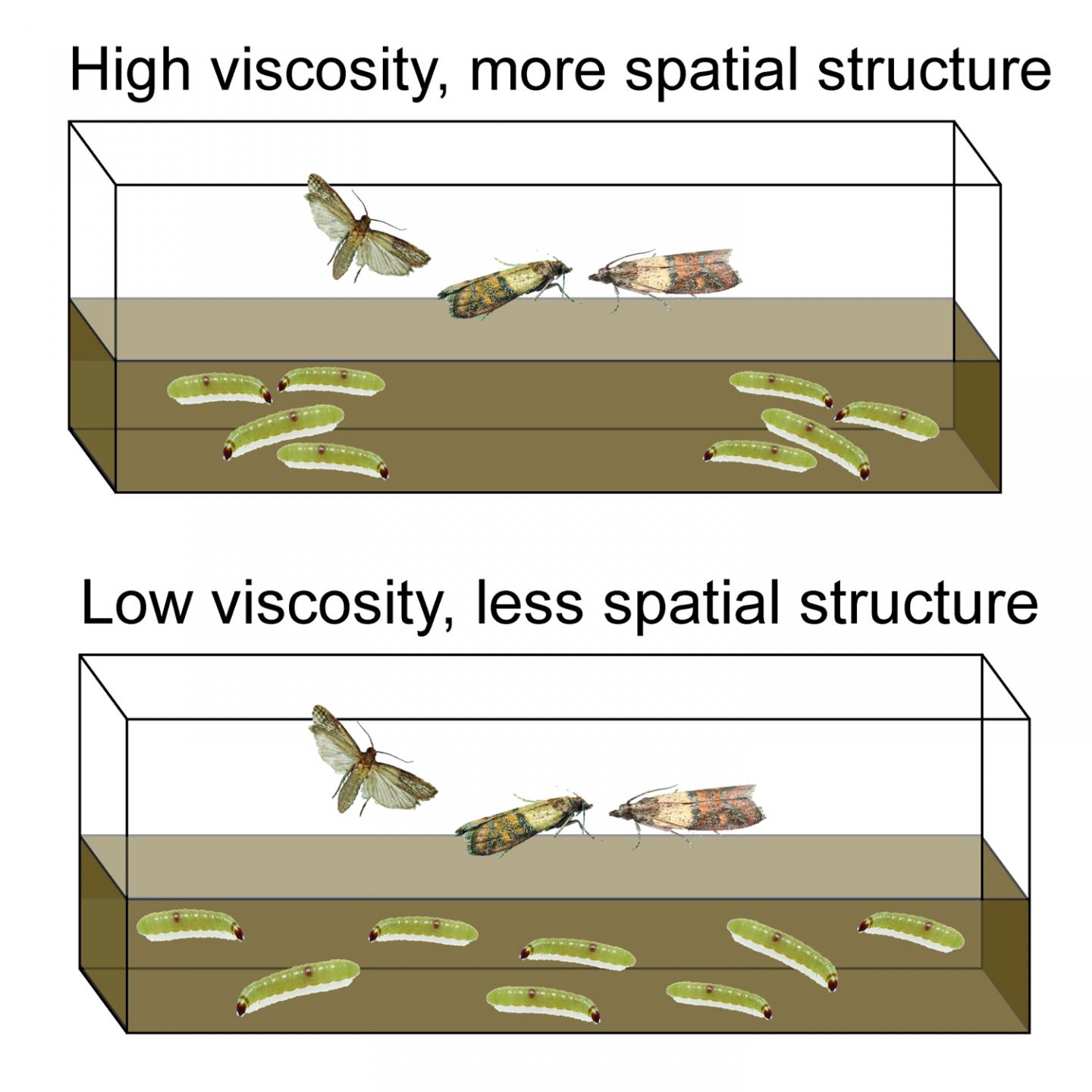 Indian meal moths were raised for successive generations in sealed enclosures where conditions were identical save for the stickiness of their food. In enclosures (top) where food was stickier, caterpillars were more likely to interact with siblings. Meal moths with more local interactions with siblings evolved less selfish behavior - as evidenced by lower rates of cannibalism - within 10 generations. 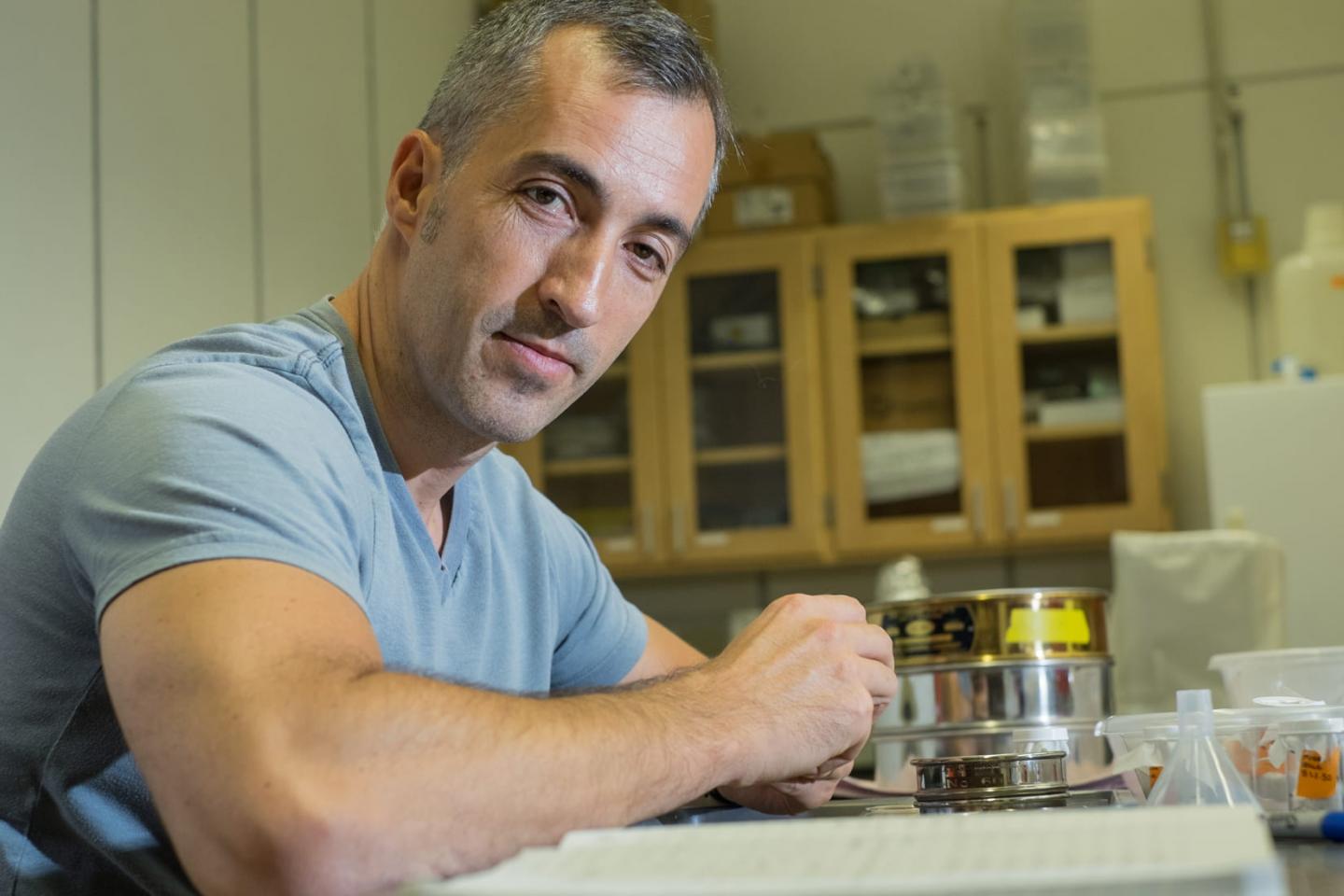 Volker Rudolf is a professor of biosciences at Rice University

Newswise — HOUSTON - (March 25, 2021) - One of nature's most prolific cannibals could be hiding in your pantry, and biologists have used it to show how social structure affects the evolution of selfish behavior.

Researchers revealed that less selfish behavior evolved under living conditions that forced individuals to interact more frequently with siblings. While the finding was verified with insect experiments, Rice University biologist Volker Rudolf said the evolutionary principal could be applied to study any species, including humans.

In a study published online this week in Ecology Letters, Rudolf, longtime collaborator Mike Boots of the University of California, Berkeley, and colleagues showed they could drive the evolution of cannibalism in Indian meal moth caterpillars with simple changes to their habitats.

Also known as weevil moths and pantry moths, Indian meal moths are common pantry pests that lay eggs in cereals, flour and other packaged foods. As larvae, they're vegetarian caterpillars with one exception: They sometimes eat one another, including their own broodmates.

In laboratory tests, researchers showed they could predictably increase or decrease rates of cannibalism in Indian meal moths by decreasing how far individuals could roam from one another, and thus increasing the likelihood of "local" interactions between sibling larvae. In habitats where caterpillars were forced to interact more often with siblings, less selfish behavior evolved within 10 generations.

Rudolf, a professor of biosciences at Rice, said increased local interactions stack the deck against the evolution of selfish behaviors like cannibalism.

To understand why, he suggests imagining behaviors can be sorted from least to most selfish.

"At one end of the continuum are altruistic behaviors, where an individual may be giving up its chance to survive or reproduce to increase reproduction of others," he said. "Cannibalism is at the other extreme. An individual increases its own survival and reproduction by literally consuming its own kind."

Rudolf said the study provided a rare experimental test of a key concept in evolutionary theory: As local interactions increase, so does selective pressure against selfish behaviors. That's the essence of a 2010 theoretical prediction by Rudolf and Boots, the corresponding author of the meal moth study, and Rudolf said the study's findings upheld the prediction.

In the meal moth experiments, Rudolf said it was fairly easy to ensure that meal moth behavior was influenced by local interactions.

"They live in their food," he said. "So we varied how sticky it was."

Fifteen adult females were placed in several enclosures to lay eggs. The moths lay eggs in food, and larval caterpillars eat and live inside the food until they pupate. Food was plentiful in all enclosures, but it varied in stickiness.

"Because they're laying eggs in clusters, they're more likely to stay in these little family groups in the stickier foods that limit how fast they can move," Rudolf said. "It forced more local interactions, which, in our system, meant more interactions with siblings. That's really what we think was driving this change in cannibalism."

Rudolf said the same evolutionary principal might also be applied to the study of human behavior.

"In societies or cultures that live in big family groups among close relatives, for example, you might expect to see less selfish behavior, on average, than in societies or cultures where people are more isolated from their families and more likely to be surrounded by strangers because they have to move often for jobs or other reasons," he said.

Rudolf has studied the ecological and evolutionary impacts of cannibalism for nearly 20 years. He finds it fascinating, partly because it was misunderstood and understudied for decades. Generations of biologists had such a strong aversion to human cannibalism that they wrote off the behavior in all species as a "freak of nature," he said.

That finally began to change slowly a few decades ago, and cannibalism has now been documented in well over 1,000 species and is believed to occur in many more.

"It's everywhere. Most animals that eat other animals are cannibalistic to some extent, and even those that don't normally eat other animals -- like the Indian meal moth -- are often cannibalistic," Rudolf said. "There's no morality attached to it. That's just a human perspective. In nature, cannibalism is just getting another meal."

But cannibalism "has important ecological consequences," Rudolf said. "It determines dynamics of populations and communities, species coexistence and even entire ecosystems. It's definitely understudied for its importance."

He said the experimental follow-up to his and Boots' 2010 theory paper came about almost by chance. Rudolf saw an epidemiological study Boots published a few years later and realized the same experimental setup could be used to test their prediction.

While the moth study showed that "limiting dispersal," and thus increasing local interactions, can push against the evolution of cannibalism by increasing the cost of extreme selfishness, Rudolf said the evolutionary push can probably go the other way as well. "If food conditions are poor, cannibalism provides additional benefits, which could push for more selfish behavior."

He said it's also possible that a third factor, kin recognition, could also provide an evolutionary push.

"If you're really good at recognizing kin, that limits the cost of cannibalism," he said. "If you recognize kin and avoid eating them, you can afford to be a lot more cannibalistic in a mixed population, which can have evolutionary benefits."

Rudolf said he plans to explore the three-way interaction between cannibalism, dispersal and kin recognition in future studies.

"It would be nice to get a better understanding of the driving forces and be able to explain more of the variation that we see," he said. "Like, why are some species extremely cannibalistic? And even within the same species, why are some populations far more cannibalistic than others. I don't think it's going to be one single answer. But are there some basic principles that we can work out and test? Is it super-specific to every system, or are there more general rules?"

Caption: Indian meal moths were raised for successive generations in sealed enclosures where conditions were identical save for the stickiness of their food. In enclosures (top) where food was stickier, caterpillars were more likely to interact with siblings. Meal moths with more local interactions with siblings evolved less selfish behavior - as evidenced by lower rates of cannibalism - within 10 generations.

Caption: Volker Rudolf is a professor of biosciences at Rice University