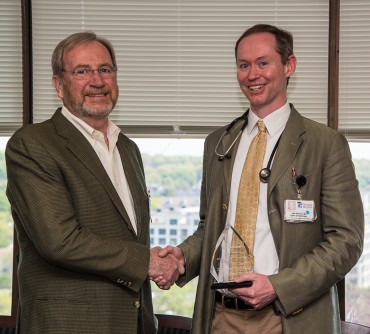 The VF RED Award is presented annually to a medical professional who made a quick diagnosis of vasculitis, thus enabling the patient to receive timely and appropriate treatment, potentially sparing the patient permanent and ongoing health complications.

“The goal of the V-RED Award is to honor these healthcare professionals because they are a part of our goal to raise awareness about the need for earlier diagnosis of vasculitis,” says Joyce Kullman, Executive Director of the Vasculitis Foundation. “So often our patients fail to get an early diagnosis because vasculitis symptoms can mimic so many other conditions. We created the V-RED Award to single out those medical professionals who did catch the disease in its early stages, thus improving the outcome for the patient.”

David Tait, a resident of New Canaan, Connecticut, nominated Dr. Sullivan for the VF’s 2016 V-RED Award believing that it was Dr. Sullivan’s early diagnosis of vasculitis that gave him a more positive health outcome. In 2014, after suffering a heart attack, Tait was taken to the Norwalk Hospital Emergency Department where he was placed under the care of Sullivan.

Sullivan said that as a hospitalist he reviews each patient’s prior medical history and test results. He becomes a clinical data detective looking at all of the patient’s medical records for diagnostic red flags.

In Tait’s case, it was an unusually high eosinophil count that captured Sullivan’s attention. Based on his findings, Sullivan was able to diagnose Tait with EGPA / Churg-Strauss Syndrome, a rare autoimmune systemic vasculitis.“It took me some time to gather and review all of David's records, and we were stymied for a couple of days when some of his workups came back negative,” said Sullivan. “However, I nonetheless suspected Churg-Strauss, and I was able to uncover a series of case reports of patients with Churg-Strauss, which fit David’s clinical profile exactly.”

Sullivan’s early diagnosis of vasculitis prevented the disease from progressing and causing more serious organ damage. Tait was immediately treated with prednisone and cytoxan, which are standard therapies for vasculitis patients.

“The award is of course very meaningful to me personally, and I appreciate the recognition from the Vasculitis Foundation and all of the great work it does to raise awareness of these treatable but difficult-to-diagnose diseases,” says Sullivan. “I hope this award can serve to prompt clinicians to keep vasculitis in mind as they go about their busy day-to-day activities so that we can intervene appropriately for our patients.”

The VF is committed to improving the lives of current and future patients and is positioned as the definitive resource for patients, family members, medical professionals and researchers seeking information about vasculitis.