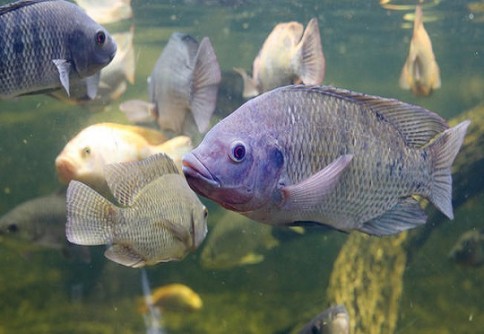 Image: A school of powder blue tang in the coral reefs off East Africa.

Newswise — A study of East African coral reefs has uncovered an unfolding calamity for the region: plummeting fish populations due to overfishing, which in turn could produce widespread food insecurity.

The remedy, says the sole author of the study, is to recognize the need to rebuild fish stocks to ensure they are providing the maximum possible catch for the developing countries of Kenya, Tanzania, and Mozambique. The African continent has among the highest human population growth rates and associated food security issues.

“Whereas fish stocks within marine parks and areas in distant or turbulent locations were found to be at healthy levels, coastal areas open to fishing were another story,” said McClanahan. “We have found that fish catches have been declining in Africa in recent years by a million tons a year, and this study shows that much of this decline in East Africa is due to declining fish stocks.”

Based on a sample of 239 sites—data gathered over several years—the study and previous estimates show that 70 percent of the reefs have fish stocks below the levels that will produce the maximum fisheries yields. The few areas above this level were in marine parks, rural areas, and remote or dangerous seas.

The study further shows that low stocks not only affects food production but also the diversity of fish and reef ecology. Numbers of fish species decline rapidly when stocks decline below sustainable levels.  This loss of species will have consequences for the long-term recovery and the potential to produce food.

In light of the central finding that fish stocks in East Africa are severely depleted to unsustainable levels, the study suggests that rebuilding fish biomass is the key management action needed for long-term sustainability of the fisheries. Stricter fisheries management and enforcement alongside expanding spatially diverse fishing restrictions are essential to rebuilding stocks, maintaining species diversity, recovering fisheries and ensuring longterm ecosystem services for the East African coast.

The study follows on recent fisheries research that reveals that, where fisheries science is active and evaluating reefs, stocks are rebuilding.  The fisheries division of the FAO in Rome (http://www.fao.org/about/meetings/sustainable-fisheries-symposium/about-the-symposium/en/) recently evaluated their needs in the coming decades and concluded that knowing the stock levels of countries without good fisheries science is undermining efforts to achieve global fisheries sustainability.

Wildlife Conservation Society (WCS) MISSION: WCS saves wildlife and wild places worldwide through science, conservation action, education, and inspiring people to value nature. To achieve our mission, WCS, based at the Bronx Zoo, harnesses the power of its Global Conservation Program in nearly 60 nations and in all the world’s oceans and its five wildlife parks in New York City, visited by 4 million people annually. WCS combines its expertise in the field, zoos, and aquarium to achieve its conservation mission. Visit: newsroom.wcs.org. Follow: @WCSNewsroom. For more information: +1 (347) 840-1242.