Spiky filaments identified that may play key role in fertilization 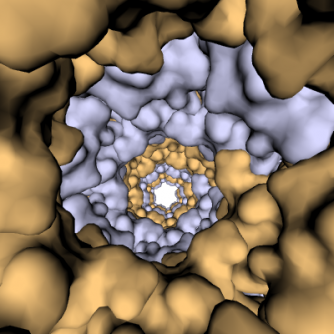 The SLLP1 filament viewed along its central pore 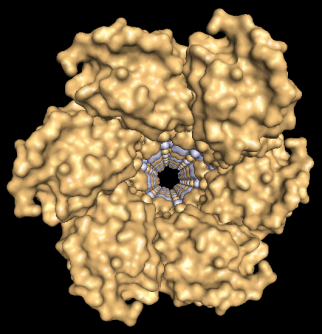 The SLLP1 filament viewed along its cross section 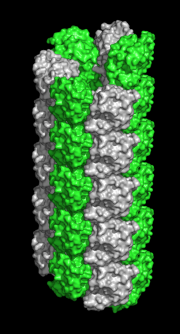 The SLLP1 filament viewed along the side, with each neighboring monomer colored alternatively 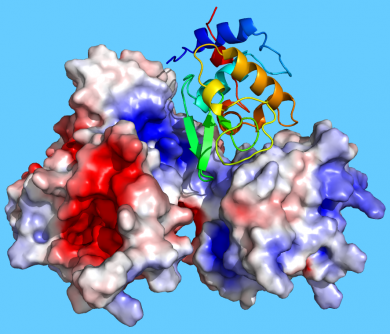 The crystal structure of SLLP1 molecule (shown in rainbow) is riding on the computational model of its oocyte-side binding partner, SAS1B (shown as molecular surface).

Newswise — Could the sperm harpoon the egg to facilitate fertilization? That’s the intriguing possibility raised by the University of Virginia School of Medicine’s discovery that a protein within the head of the sperm forms spiky filaments, suggesting that these tiny filaments may lash together the sperm and its target.

The finding, 14 years in the making, has earned the cover of the scientific journal Andrology. It represents a significant step forward in the fine dissection of the protein architecture of the sperm’s acrosomal matrix, an organelle in the sperm head, and suggests a new hypothesis concerning what happens during fertilization.

“This finding has really captured our imagination,” said UVA reproduction researcher John Herr, PhD, of the Department of Cell Biology. “One of the major proteins that is abundant in the acrosome [in the arterior region of the sperm head] is crystallizing into filaments, and we now postulate they’re involved in penetrating the egg -- that’s the new hypothesis emerging from the finding, which leads to a whole new set of questions and new hypotheses about the very fine structure of molecular events during fertilization.”

LoomingsThe discovery is the result of a longstanding collaboration between Herr’s lab and the lab of Wladek Minor, PhD, of the Department of Molecular Physiology and Biological Physics. Years ago, Herr’s lab discovered the protein that has now been shown to form the filaments, which they dubbed sperm lysozyme-like protein 1 (SLLP1). This protein is a member of a family of proteins now known to reside inside the acrosome.

Herr’s lab, however, had no way to determine the shape and structure of the protein. That’s where Minor’s lab came in. To figure it out, Minor’s team had to capture the protein within a static crystal, cool the crystal to cryogenic temperatures to prevent decay and then blast it with X-rays. By examining how those X-rays were refracted, they could calculate the shape of the protein, somewhat like mapping out a shipwreck with sonar.

It was no easy task, requiring many attempts and much analysis. But in the end, they were able to produce one of the first descriptions of a sperm protein. “This is an important protein, because it’s the first crystal structure from a protein within the sperm acrosome,” said Heping Zheng, the lead author of the paper outlining the discovery. “It is also the first structure of a mammalian sperm protein with a specific oocyte-side binding partner characterized. To our knowledge, only nine proteins specifically obtained from mammalian sperm have known structures.”

A Gold Coin Nailed to the MastThe new understanding of the structure will now act as a map for Herr and other reproductive biologists exploring how fertilization occurs. “At the very fundamental level, understanding that fine molecular architecture leads me, the biologist, to be able to posit new functions for this family of proteins my lab discovered in the acrosome,” Herr explained.

The mutually beneficial collaboration between the labs is vital, Minor noted. “You have to explain the relation between structure and function,” he said. “You can make a beautiful picture of the Himalayas, for example. For some time, when nobody knew the Himalayas, it was enough to show the picture. It was a beautiful picture; nobody had seen that before. Now, you can go close to Mount Everest, you can make a picture, you can send it to the Washington Post or the New York Times. Nobody will print that, because who cares? They have millions of these pictures. But if you have a story about someone who climbed the mountain in winter, skied down and saved the life of another climber, you have a story for the front page of the New York Times. It’s the same here. You must have a story, a novel understanding, to go with the structure on the cover of the journal.” 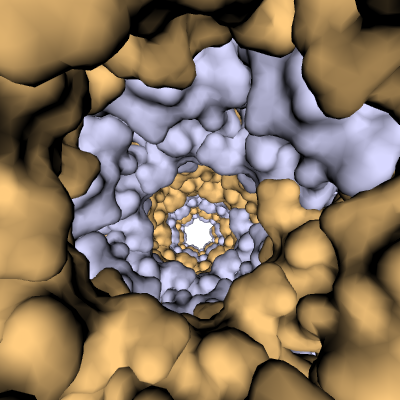 Caption: The SLLP1 filament viewed along its central pore 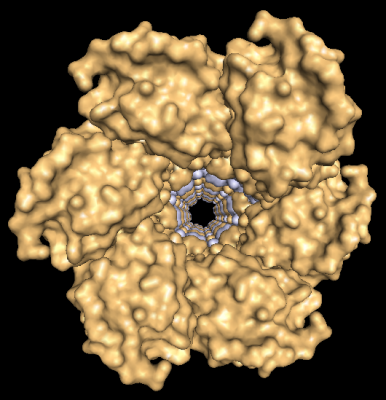 Caption: The SLLP1 filament viewed along its cross section 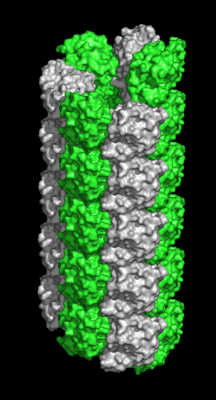 Caption: The SLLP1 filament viewed along the side, with each neighboring monomer colored alternatively 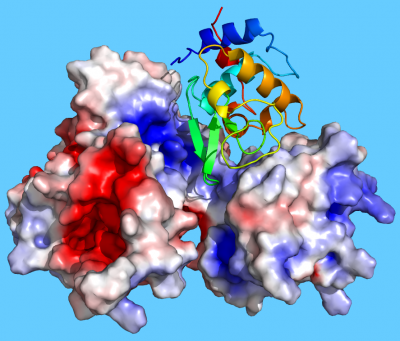 Caption: The crystal structure of SLLP1 molecule (shown in rainbow) is riding on the computational model of its oocyte-side binding partner, SAS1B (shown as molecular surface).