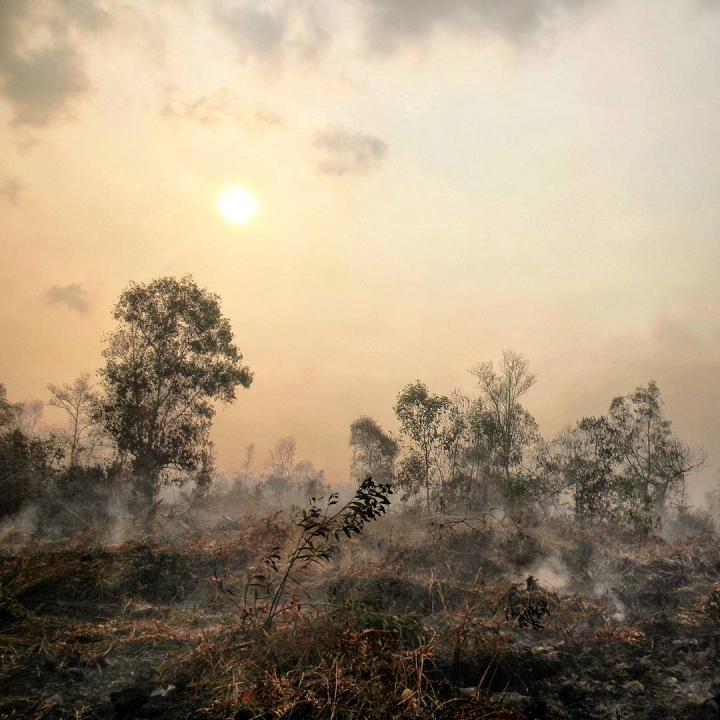 A new study led by Swansea University reveals that only 10% of the forest that is left on two Indonesian islands remains fire-resistant. The researchers warn that protecting this is crucial for preventing catastrophic fire. Tropical deforestation exacerbates recurrent peatland fire events in this region. These release globally significant greenhouse gas emissions and produce toxic haze events across South East Asia.

Newswise — A new study led by researchers in the Geography Department at Swansea University reveals the extreme scale of loss and fragmentation of tropical forests, which once covered much of the Indonesian islands of Sumatra and Kalimantan.

The study also reveals that only 10% of the forest that is left remains fire-resistant. The researchers warn that protecting this is crucial for preventing catastrophic fire.

An area of tropical forest and peatland larger than the Netherlands has burned in Indonesia in the past five years, according to Greenpeace.

Yet the study shows that contiguous tracts of undisturbed forests are not susceptible to burning even under current drought conditions.

"Undisturbed tropical rainforests are naturally resistant to fire due to the humid and cool micro-climate they maintain, effectively acting as a fire barrier. Contrary to the widely-held perception that worsening droughts are threatening the remaining rainforests, tropical forests in Indonesia become susceptible to fire only after human disturbance."

However, the study also reveals that currently only a small fraction (~10%) of the remaining total tropical forest cover remains fire-resistant. The rest (~90%) has been severely fragmented or degraded and therefore is no longer able to maintain a fire-resistant microclimate.

The authors emphasize that the preventative role tropical forests play against fire is yet another important reason for the preservation and regeneration of the few remaining contiguous tracts of forests.

"Protecting tropical forest is critical not only for biodiversity and carbon storage but also for preventing future catastrophic fire episodes. This is true for Indonesia, as well as for tropical forest in Africa and South America".

The research was published in a Nature group journal, Communications Earth and Environment

This study is part of Swansea University-based Towards Fire Early Warning System for Indonesia (ToFEWSI) project.

Swansea University is a world-class, research-led, dual campus university offering a first-class student experience and has one of the best employability rates of graduates in the UK. The University has the highest possible rating for teaching - the Gold rating in the Teaching Excellence Framework (TEF) in 2018 and was commended for its high proportions of students achieving consistently outstanding outcomes.

Swansea climbed 14 places to 31st in the Guardian University Guide 2019, making us Wales' top ranked university, with one of the best success rates of graduates gaining employment in the UK and the same overall satisfaction level as the Number 1 ranked university.

The 2014 Research Excellence Framework (REF) 2014 results saw Swansea make the 'biggest leap among research-intensive institutions' in the UK (Times Higher Education, December 2014) and achieved its ambition to be a top 30 research University, soaring up the league table to 26th in the UK.

The University is in the top 300 best universities in the world, ranked in the 251-300 group in The Times Higher Education World University rankings 2018. Swansea University now has 23 main partners, awarding joint degrees and post-graduate qualifications.

The University was established in 1920 and was the first campus university in the UK. It currently offers around 350 undergraduate courses and 350 postgraduate courses to circa 20,000 undergraduate and postgraduate students. The University has ambitious expansion plans as it moves towards its centenary in 2020 and aims to continue to extend its global reach and realise its domestic and international potential.

Swansea University is a registered charity. No.1138342. Visit http://www.swansea.ac.uk