Fluorescent Probe Could Light Up Cancer 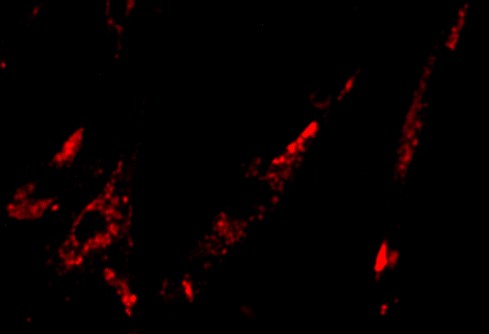 By illuminating the enzyme beta-galactosidase in a cell culture, Michigan Tech chemists hope to make it easier to leave more healthy tissue behind in cancer surgery.

Newswise — What if you could plaster cancer cells with glowing “Here We Are” signs, so surgeons could be confident that they’d removed every last speck of a tumor? That’s what Haiying Liu has in mind for his new fluorescent probe.

“Doctors need to pinpoint cancer tissue, but that can be hard,” said Liu, a chemistry professor at Michigan Technological University. Test-tube cancer antibodies coupled with special enzymes have been used to highlight malignancies during surgery, since they bind to tumor cells, but they have a drawback.

“They are colorless,” he said. “You can label something, but if you can’t see it, that’s a problem.” Now Liu has developed a probe that could cling to those enzyme-coated antibodies and make them glow under fluorescent light. The journal Analytica Chimica Acta recently published the research.

The fluorescent probe has some appealing medical properties:

It fluoresces in near-infrared, which can penetrate deep tissues, a property that would allow surgeons to detect malignancies buried in healthy tissue.

It would result in less “background noise” for surgeons, since other fluorescent tissues typically glow green or blue.

It is virtually nontoxic at low concentrations.

It responds quickly to the enzyme at ultra-low concentrations.

Its fluorescence is stable and long lasting, so it could shine through hours-long cancer operations.

The probe bonds to an enzyme that has a long track record in medical science. Beta-galactosidase has been widely used to label a variety of antibodies that have been used in multiple medical applications, including cancer surgery. “If we could make beta-galactosidase glow brightly during surgery, it could play a major role in improving outcomes,” Liu said.

In the new paper, Liu’s team showed how the probe bonds to beta-galactocidase in a solution of living cells. In the future, they would like to collaborate with medical researchers to refine their system, incorporating enzyme-labelled cancer antibodies and developing it as a guide for surgeons.

“Doctors want to remove all the cancer, but they also don’t want to cut too much,” Liu said. “We want to make their job a little easier.”