For Certain Himalayan Birds, It’s Getting (too) Hot, Hot, Hot 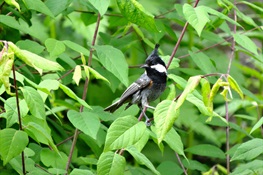 For Certain Himalayan Birds, It’s Getting (too) Hot, Hot, Hot

1. Researchers studied how bird communities are responding to agricultural expansion in the Himalayan mountain range, which exhibits a strong east-west gradient in annual temperature variation.
2. They surveyed bird communities at opposite ends of that gradient, and tested whether species’ thermal sensitivity influenced their response to the replacement of forest with agriculture.
3. They found that thermal specialists are more vulnerable to forest loss than species with greater thermal tolerances indicating that species’ responses to global change may differ predictably along gradients even within a single region or biodiversity hotspot, and such variation must be addressed in conservation planning.
WCS Media Contact:  Stephen Sautner, 7182203682, ssautner@wcs.org