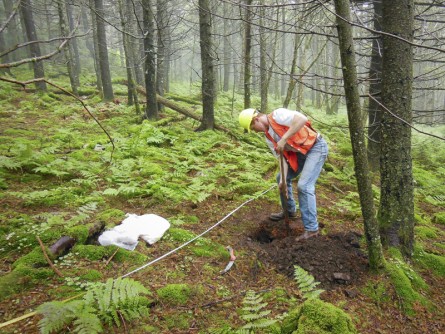 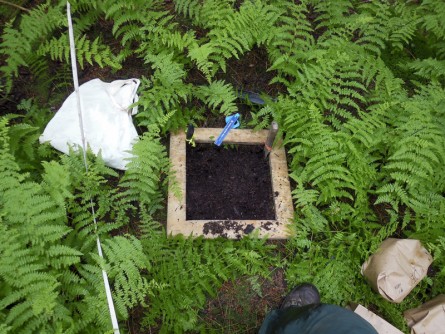 Soil samples are collected in a 30 x 30 cm frame, separated into horizons and placed in brown paper bags for transport to the soil analysis lab. 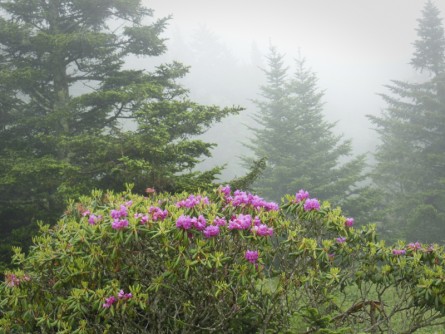 High elevation spruce-fir forests have a mix of evergreen and deciduous plants. Shown, a rhododendron bush in bloom. Before the Clean Air Act of 1970, the morning fog could have contained acidic particles from air pollution. These acids were hurtful to humans, plants and soil.

Newswise — February 5, 2020 – Before the United States 1970 Clean Air Act, rainfall all over the country was acidic. As precipitation would fall from the sky, it would mix with gases from industrial plants, emissions from cars, and especially coal and fossil fuel consumption. That caused the water to become acidic – also called “acid rain.”

Besides the air pollution hurting plants and humans, this acid rain also hurt our soils. Even dry deposits of these acidic emissions could be hurtful to humans, plants, soil and water. Acidic soil can bind nutrients so that plants can’t get them. It can hurt the microbes in soil, as well as plants.

One odd “helpful” thing acid rain did, though, was to provide a few nutrients to the soil. The sulfur in the acid rain – in the form of sulfates – actually provided nutrition to plants. However, the benefit was negligible, and the overall effects of pollution required regulation. Occasionally, cities like Los Angeles will still experience “smog.” The incidents are even more common in China and India, where little regulation is in effect.

Jennifer Knoepp, with the US Forest Service, has been studying how the reduction of air pollution and acid rain is affecting forests in the southern Appalachian Mountains. Her interest is to see how soils are recovering as our air gets cleaner.

Both the 1970 Clean Air Act and 1990 Amendment regulated emissions across the United States, resulting in improved air and water quality. But what about the soil – the “skin” of the earth – that provides for food and shelter and is home to the world’s largest biodiversity?

“We have found significant movement of sulfate from the soils over time,” says Knoepp. “Sulfate is moving out of the surface soils and into the subsoil. In addition, the streams in our study site show improved water quality. However, soils and streams still exhibit chemical imbalances. This suggests recovery from decades of acid rain is a long-term process.”

To evaluate the soils and water, researchers sampled 24 high elevation spruce-fir forest sites and two watersheds in the southern Appalachians. The sites represent a region in the southeastern U.S. with high gradients in elevation and precipitation, as well as high biodiversity.

The research area includes sites within the Great Smoky Mountain National Park and the southern end of the Blue Ridge Parkway. Both are major tourist and outdoor recreation destinations.

Recent soil collections were compared to archived soil samples from the 80s and 90s. Sample archives are essential to long-term research. They provide the ability to conduct tests not planned during an original experimental design.

The research team analyzed both the newly collected and archived samples for “extractable sulfate.” All data were used to determine the long-term response of southern Appalachian forests to changes in sulfate deposition that occurred after the implementation of the Clean Air Act Amendment in 1990.

Knoepp presented her work at the November International Annual Meeting of the American Society of Agronomy, Crop Science Society of America, and Soil Science Society of America in San Antonio as the Sergei A. Wilde Distinguished Lectureship on Forest Soils. Funding for this project was provided by the USDA Forest Service Southern Research Station Coweeta Hydrologic Laboratory project, the USDA Forest Service Southern Region, Tennessee Valley Authority settlement agreement to the National Forest in North Carolina, and the Cherokee National Forest.