Fossil Is the Oldest-Known Scorpion 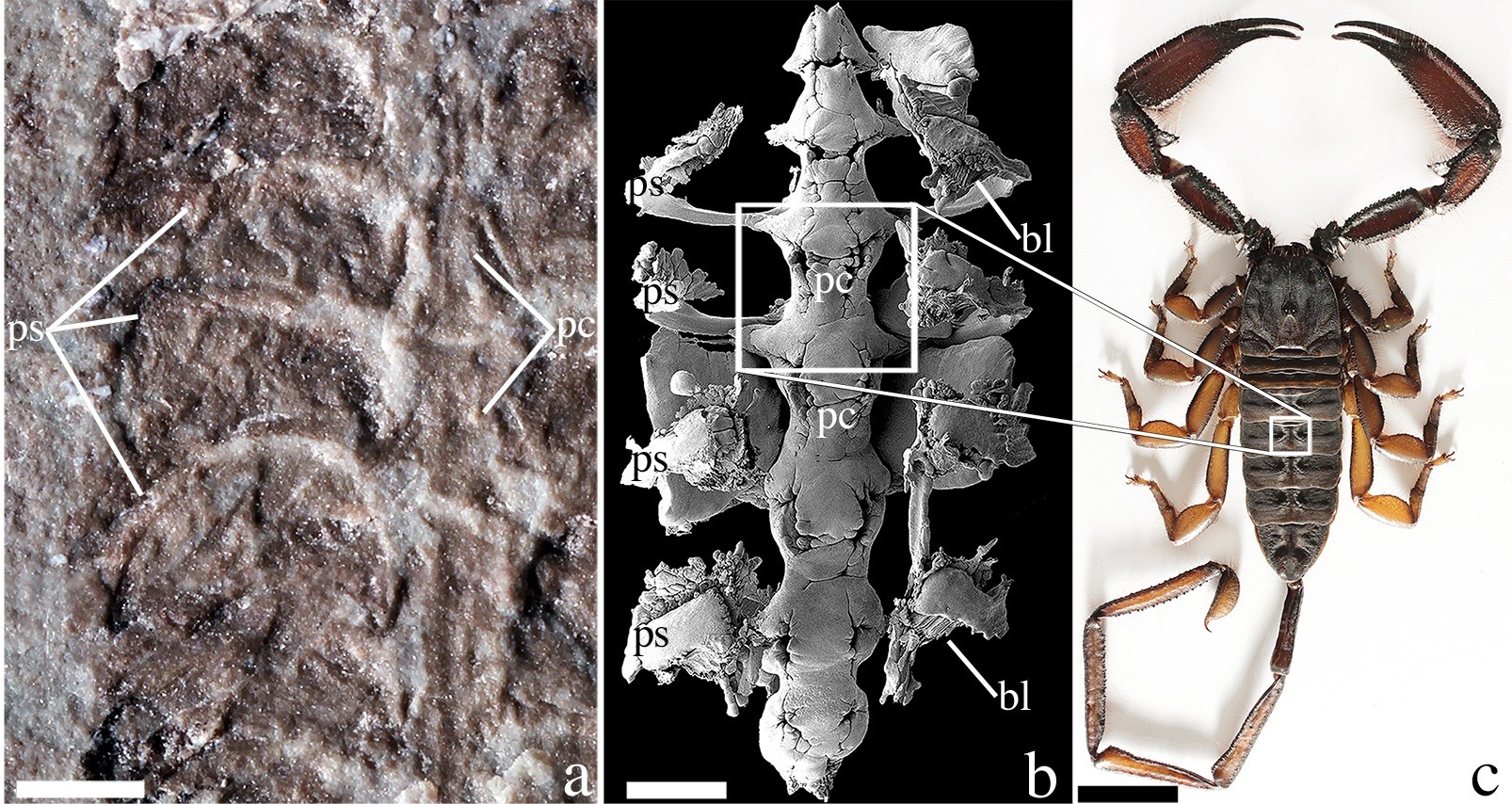 The fossil (left) was unearthed in Wisconsin in 1985. Scientists analyzed it and discovered the ancient animal's respiratory and circulatory organs (center) were near-identical to those of a modern-day scorpion (right).

Newswise — COLUMBUS, Ohio — Scientists studying fossils collected 35 years ago have identified them as the oldest-known scorpion species, a prehistoric animal from about 437 million years ago. The researchers found that the animal likely had the capacity to breathe in both ancient oceans and on land.

The discovery provides new information about how animals transitioned from living in the sea to living entirely on land: The scorpion’s respiratory and circulatory systems are almost identical to those of our modern-day scorpions — which spend their lives exclusively on land — and operate similarly to those of a horseshoe crab, which lives mostly in the water, but which is capable of forays onto land for short periods of time.

The researchers named the new scorpion Parioscorpio venator. The genus name means “progenitor scorpion,” and the species name means “hunter.” They outlined their findings in a study published today in the journal Scientific Reports.

“We’re looking at the oldest known scorpion — the oldest known member of the arachnid lineage, which has been one of the most successful land-going creatures in all of Earth history,” said Loren Babcock, an author of the study and a professor of earth sciences at The Ohio State University.

“And beyond that, what is of even greater significance is that we’ve identified a mechanism by which animals made that critical transition from a marine habitat to a terrestrial habitat. It provides a model for other kinds of animals that have made that transition including, potentially, vertebrate animals. It’s a groundbreaking discovery.”

The “hunter scorpion” fossils were unearthed in 1985 from a site in Wisconsin that was once a small pool at the base of an island cliff face. They had remained unstudied in a museum at the University of Wisconsin for more than 30 years when one of Babcock’s doctoral students, Andrew Wendruff — now an adjunct professor at Otterbein University in Westerville — decided to examine the fossils in detail.

Wendruff and Babcock knew almost immediately that the fossils were scorpions. But, initially, they were not sure how close these fossils were to the roots of arachnid evolutionary history. The earliest known scorpion to that point had been found in Scotland and dated to about 434 million years ago. Scorpions, paleontologists knew, were one of the first animals to live on land full-time.

The Wisconsin fossils, the researchers ultimately determined, are between 1 million and 3 million years older than the fossil from Scotland. They figured out how old this scorpion was from other fossils in the same formation. Those fossils came from creatures that scientists think lived between 436.5 and 437.5 million years ago, during the early part of the Silurian period, the third period in the Paleozoic era.

“People often think we use carbon dating to determine the age of fossils, but that doesn’t work for something this old,” Wendruff said. “But we date things with ash beds — and when we don’t have volcanic ash beds, we use these microfossils and correlate the years when those creatures were on Earth. It’s a little bit of comparative dating.”

The Wisconsin fossils — from a formation that contains fossils known as the Waukesha Biota­ — show features typical of a scorpion, but detailed analysis showed some characteristics that were not previously known in any scorpion, such as additional body segments and a short “tail” region, all of which shed light on the ancestry of this group.

Wendruff examined the fossils under a microscope, and took detailed, high-resolution photographs of the fossils from different angles. Bits of the animal’s internal organs, preserved in the rock, began to emerge. He identified the appendages, a chamber where the animal would have stored its venom, and — most importantly — the remains of its respiratory and circulatory systems.

This scorpion is about 2.5 centimeters long — about the same size as many scorpions in the world today. And, Babcock said, it shows a crucial evolutionary link between the way ancient ancestors of scorpions respired under water, and the way modern-day scorpions breathe on land. Internally, the respiratory-circulatory system has a structure just like that found in today’s scorpions.

“The inner workings of the respiratory-circulatory system in this animal are, shape-wise, identical to those of the arachnids and scorpions that breathe air exclusively,” Babcock said. “But it also is incredibly similar to what we recognize in marine arthropods like horseshoe crabs. So, it looks like this scorpion, this lineage, must have been pre-adapted to life on land, meaning they had the morphologic capability to make that transition, even before they first stepped onto land.”

Paleontologists have for years debated how animals moved from sea to land. Some fossils show walking traces in the sand that may be as old as 560 million years, but these traces may have been made in prehistoric surf — meaning it is difficult to know whether animals were living on land or darting out from their homes in the ancient ocean.

But with these prehistoric scorpions, Wendruff said, there was little doubt that they could survive on land because of the similarities to modern-day scorpions in the respiratory and circulatory systems.