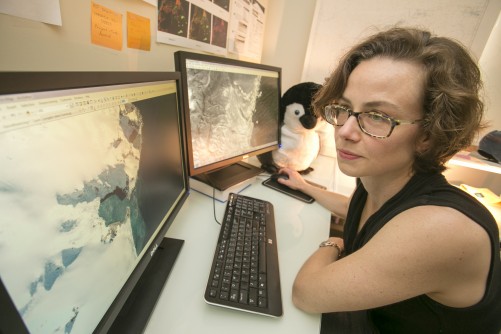 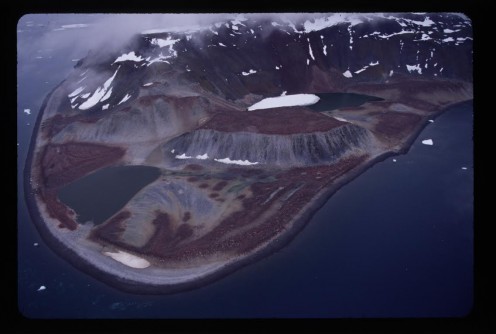 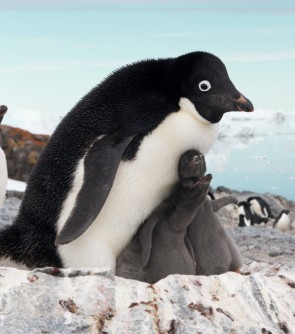 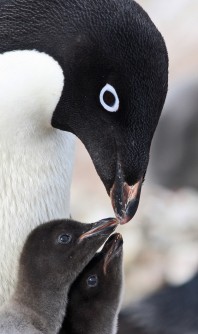 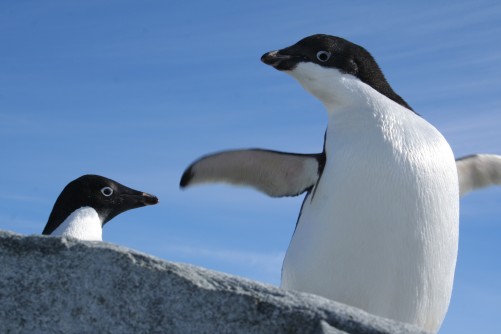 Adélie penguin with adult in the background. 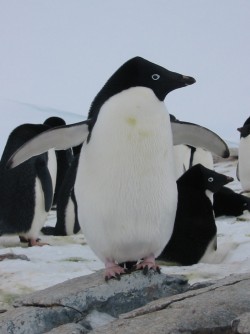 Newswise — Stony Brook, NY, July 9, 2014 – The first global census of the Adélie penguin, long considered a key indicator species to monitor and understand the effects of climate change and fishing in the Southern Ocean, has revealed its population (3.79 million breeding pairs) to be 53 percent larger than previously estimated. By using high-resolution satellite imagery, Stony Brook University ecologist Heather Lynch, PhD, and conservation biologist Michelle LaRue, PhD, of the University of Minnesota, have applied a new method that permits regular monitoring of Adélie penguins across their entire breeding range, and by extension the health of the Southern Ocean ecosystem. Their findings are published in The Auk, Orinthological Advances.

Ecologists have been tracking Adélie penguin population declines on the Antarctic Peninsula for decades but have found conflicting trends elsewhere in their breeding range. Lynch and LaRue’s new paper, titled “First global census of the Adélie Penguin,” finally puts all of these scattered pieces of information into a global perspective, finding that Adélie populations at the global scale appear to be growing. Key to identifying the colonies – including the discovery of 17 populations not known to exist – was use of satellite imagery to pinpoint the spectral characteristics of the excrement (called guano) of Adélies, a way to clearly identify the species’ breeding grounds. The research has implications to better inform policy makers and scientists regarding Marine Protected Areas and climate change.

“We believe this is a landmark study with data that provides not only information on the population dynamics of Adélie penguins but injects critically needed information into the ongoing negotiations regarding the implementation of Marine Protected Areas in the Southern Ocean,” said Dr. Lynch, Assistant Professor of Ecology & Evolution at Stony Brook University and a leading researcher using the increasingly popular technique of high-resolution satellite imagery to map the presence and abundance of Antarctic seabirds.

Over the past several years, the Commission for the Conservation of Antarctic Marine Living Resources (CCAMLR) has discussed the establishment of a series of Marine Protected Areas surrounding Antarctica and the sub-Antarctic islands. Dr. Lynch explained that Adélie penguins are not only themselves a species of conservation concern, but their distribution and abundance globally also reflect the distribution of their marine prey – primarily krill and fish.

“Our finding of a 53 percent increase in Adélie penguin breeding abundance compared to 20 years ago suggests that estimates of krill consumption by this species may be seriously underestimated. Leaving enough prey for natural krill predators is an important element in ensuring fisheries proceed sustainably, and for the first time we have a global map of Adélie abundance that can be used by CCAMLR,” added Dr. Lynch. “Not only do we have a comprehensive baseline that can be updated and improved in the future, but we’ve identified a method for monitoring this important species at a global scale.”

Other key findings from the global census include:

• High-resolution satellite imagery can be effectively used to get near real-time information about penguin populations and their distribution.• The 53 percent increase in known abundance is roughly equally divided between genuine growth of known colonies and the discovery of, or first population estimates at, previously unknown or unsurveyed colonies.• Stable or growing populations of Adélie penguins in Eastern Antarctica and the Ross Sea more than offset the rapid declines witnessed on the Antarctic Peninsula, where climate change has significantly changed the timing and decreased the extent of sea ice.• The researchers discovered 17 previously unknown Adélie colonies. The survey did not find 13 previously known colonies, 8 of which were declared extirpated.

While we celebrate the news that Adélie penguin populations are thriving, learning of these population booms reinforces the need to protect the Antarctic food web," said Andrea Kavanagh, director of The Pew Charitable Trusts' global penguin conservation campaign. The project's aim is to restore and protect penguin breeding and feeding grounds in coastal waters throughout the Southern Hemisphere, and to create large no-take marine reserves in the Southern Ocean. "We call on CCAMLR to implement a strong ecosystem management plan for the Antarctic krill, so that all penguin species have access to abundant protein and can continue to thrive."

Drs. Lynch and LaRue used high-resolution satellite imagery, recent ground counts and other techniques to identify Adélie Penguin colonies over the 5,500 kilometer Antarctic coastline in the lowest regions of the Antarctic Ocean, or Southern Ocean – a distance 40 percent longer than from New York to Los Angeles.

There has been an exploding interest among scientists internationally in using satellites to survey Antarctic species such as penguins, seals and whales. The relative simplicity of the landscape makes satellite-based surveys an exciting way to look at Antarctic biology at scales not previously thought possible, paving the way for Antarctica to become an unlikely hotbed of discovery for understanding the population dynamics of seabirds and marine mammals. 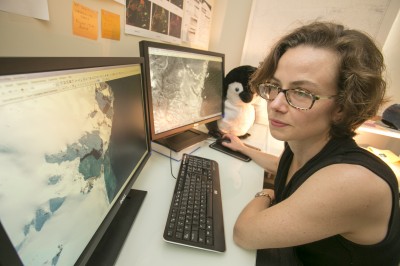 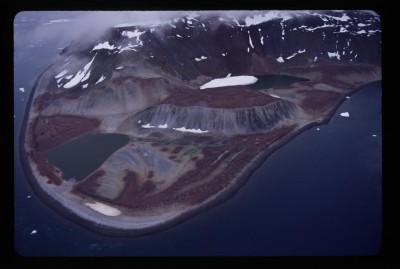 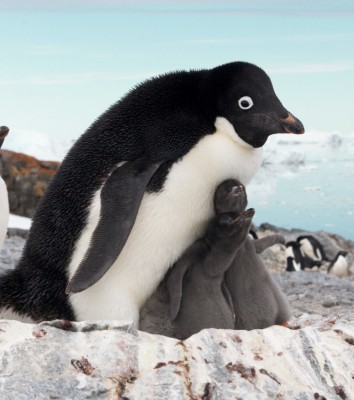 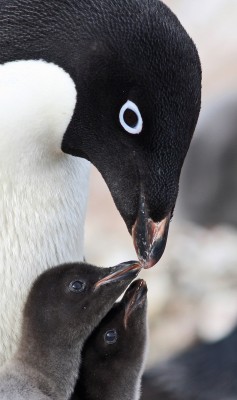 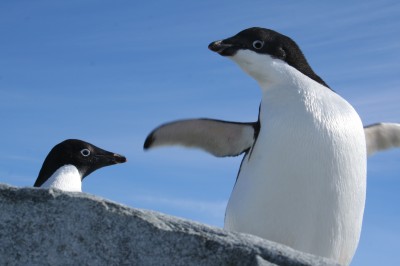 Caption: Adélie penguin with adult in the background. 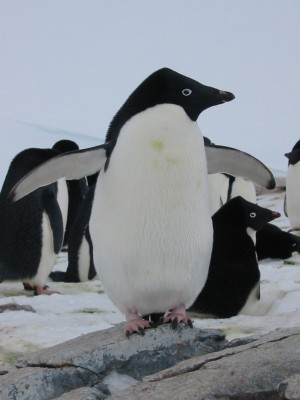