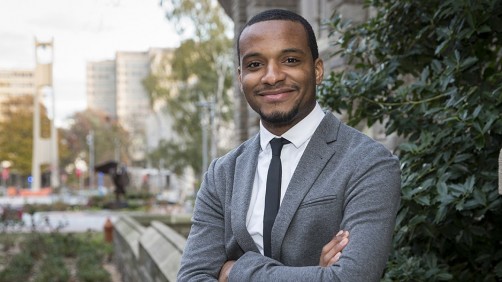 Newswise — Hazim Hardeman, a native North Philadelphian who grew up only a few blocks from Temple's Main Campus and a 2017 graduate of the Klein College of Media and Communication, has become the first Rhodes Scholar in Temple University history.

The former strategic communication major was one of 32 students and recent graduates selected from more than 850 applicants to receive a 2018 Rhodes Scholarship, the oldest and most prestigious international academic award available to Americans. Rhodes Scholarships provide all expenses for two or three years of study at the University of Oxford in England, where Hardeman will pursue a master’s degree.

“This is a truly historic moment, for Hazim Hardeman and for Temple University,” said Temple President Richard M. Englert. “Hazim has built an impressive academic and community-focused record. We could not be more proud of him and wish him the best as he leaves North Broad Street for Oxford and the next phase of his remarkable life.”

Applicants elected by the Rhodes Trust must meet rigorous standards of academic excellence, personal energy, ambition for impact, an ability to work with others to achieve goals, leadership promise, a commitment to making a difference for good, a concern for the welfare of others, and a consciousness of inequities—requirements outlined in the will of British philanthropist and African colonial pioneer Cecil Rhodes, who lived from 1853 to 1902.

Hardeman endured a long, grueling, multi-stage selection process, culminating in a lengthy interview Saturday, Nov. 18, shortly after which the 14 regional finalists were told to stand to hear the names of those who had earned the venerable scholarships. When he heard his name called, Hardeman was stunned.

“I can’t put it into words,” he said. “I went through the entire range of human emotions. My main goal at that point was just trying to rearrange myself.”

Hardeman and his three siblings were raised at 23rd and Diamond streets by his mother, Gwendolyn, whom he credits as the most influential person in his life. His mother found a way to move him from his neighborhood school to another Philadelphia public school with more resources, the Shawmont School in Roxborough. While attending Murrell Dobbins Career and Technical Education High School, his education was temporarily derailed in 11th grade by a family crisis and a move to Atlanta, but Hardeman returned to Philadelphia to graduate from HOPE Charter School in 2012. Hardeman’s next stop was the Community College of Philadelphia, where he earned an associate’s degree in communication studies with high honors.

“What makes Temple unique to me is its people,” Hardeman said. “Partly because of its location in North Philadelphia, Temple attracts a certain type of person—people who are motivated and open to building relationships that are beneficial to all parties. That’s been my experience. I’ve developed so many positive relationships here.”

At Temple, Hardeman authored or co-authored articles in peer-reviewed journals on subjects ranging from the prison abolition movement to perceptions of the relationship between mass shootings and gun control, and he presented papers and posters at conferences on pedagogy and rhetoric. Hardeman, who has served as a substitute teacher in the School District of Philadelphia, also earned an A Running Start Research and Policy Fellowship with the City of Philadelphia Mayor’s Office of Community Empowerment and Opportunity, where he explored education and municipal best practices, particularly in the area of citywide playgrounds and their need for upgrades. Hardeman is currently working as an adjunct instructor at Temple.

After earning a master’s degree at Oxford, Hardeman hopes to pursue a doctorate in communications or education and continue his research in the areas of critical pedagogy, social movements, race and politics and African American intellectual history.

“As a scholar, I hope to draw on the wisdoms of my community to intervene in our public discussions,” he said. “As a practitioner, I hope to educate inside and outside formal spaces of learning—one of which is prisons.”

Ruth Ost, senior director of Temple’s Honors Program, told The Philadelphia Inquirer that Hardeman is the ideal representation of the vision of Temple founder Russell H. Conwell, who sought to teach motivated students in the North Philadelphia neighborhoods that surrounded his church.

“We talk about acres of diamonds in our own neighborhood,” she said. “Here is Hazim, born and raised in North Philly. If we had to choose someone who represents the values of Temple and what Temple really cares about, this is the man who does that.”