Data about the structure of atoms can be transformed into sounds, giving each element its own unique musical scale. 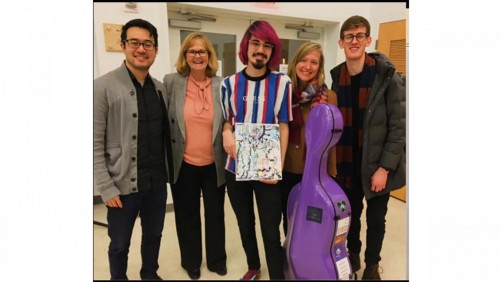 With each atom assigned a tonal signature based on its spectral signature, music can be a powerful tool for helping students understand atomic structure. Jill Linz is working toward synthesizing unique tones for each element to create an acoustic version of the periodic table.

Newswise — MELVILLE, N.Y., December 10, 2020 -- With each atom assigned a tonal signature based on its spectral signature, music can be a powerful tool for helping students understand atomic structure.

Jill Linz, at Skidmore College, is working toward synthesizing unique tones for each element to create an acoustic version of the periodic table. She will discuss her progress and the potential applications of the project at the 179th Meeting of the Acoustical Society of America, which will be held virtually Dec. 7-10.

“Atom music: Acoustical realizations of the atomic world through sonification” will be presented at 1:05 p.m. Eastern (U.S.) on Thursday, Dec. 10, as part of a poster session on musical acoustics.

Each atom has a unique fingerprint of colors that it absorbs and reflects. By transforming this color spectrum into sounds, Linz comes up with each individual atom’s tonality. Using this process, she has completed the musical periodic table through neon, and plans to focus on the most common atoms going forward, with rarer elements to come later.

“Once you understand how to get the data for the tones, it is a matter of methodically creating them,” she said.

So far, this project has led to collaborations with Carnegie Hall and a London-based DJ, with whom Linz plans to create soundscapes of celestial data from the Keck Observatory. She also guided music students through improvisational concerts based on various molecules, where each musician was assigned the scales of a specific atom, and the ensemble worked together to investigate the relationships between the atomic sounds.

“The energy in the room was phenomenal,” said Linz. “It was truly one of those once-in-a-lifetime educational experiences.”

“I am very proud of what has come out of it,” she said. “I have composed and produced an album tentatively titled ‘Atom Songs,’ which is made up of six individual pieces that stemmed from the initial recordings and synthesis work.”