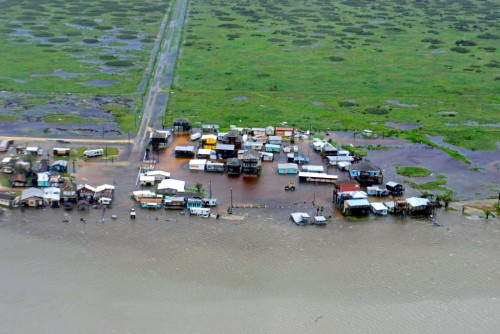 n this handout provided by the U.S. Coast Guard, The Coast Guard assessed damage and offered search and rescue assisitance during an overflight from Port Aransas to Port O’Connor, Texas, August 26, 2017.

Newswise — Hurricane Harvey left its mark on much of the Texas coast, leaving at least $100 billion in damages, but it very likely worsened a problem that has been plaguing the coast for years – beach erosion.  How much erosion occurred is still being determined, says a Texas A&M University at Galveston expert.

Jens Figlus, assistant professor of ocean engineering at Texas A&M-Galveston, says the question of how much beach erosion occurred may be hard to answer because erosion always goes hand-in-hand with deposition somewhere else.

There’s no doubt that beach erosion in Texas, as in numerous other U.S. locations, is a huge problem. Studies show that about 64 percent of the Texas coast is eroding at an average rate of 6 feet per year, but some areas are losing more than 20 feet per year. On average, the Texas coast is losing about 2.3 feet a year to erosion.

That presents obvious problems. In America, people like to live near the water: according to the Environmental Protection Agency, of the 25 most densely populated U.S. counties, 23 of them are near a coast.

“If we take the whole coastal system (the parts you can see once the water recedes like the beaches, dunes, and back-barrier areas, as well as the parts you cannot see under the water) most likely Harvey caused some areas to loose sediment and others to gain,” says Figlus.

“The impacts from Harvey on the Texas coast in terms of coastal erosion most likely vary dramatically by proximity to landfall location. Near the location of landfall, I expect to see a lot more dune overwash, breaching and erosion, whereas the central and upper Texas coast (closer to Galveston) experienced mostly accretion on the beach portions that are normally above the water. Every storm has its own characteristics and results on coastal morphology. Harvey produced fairly large offshore waves but relatively little storm surge – especially further away from the landfall location.

“What that means is that the storm waves did not have enough water to ‘ride in’ closer to the coast before breaking and dissipating that energy as they erode sediment. Essentially, as we move further away from the landfall location, the waves would break further offshore, erode sediment there and carry it onshore to be deposited on the beach.

“As I said, every storm is unique and there is no easy estimate for erosion without detailed reconnaissance investigations,” he adds.

“Also, if dunes are eroded you may actually ‘gain’ land by redistribution of sediment, but elevations are changed. Erosion tends to be a long-term ongoing process due to many factors (sea level changes, subsidence, natural or human-induced sediment source modifications). Storms have the capability to move material far away from the shoreline (offshore and onshore) and make it hard for the material to come back quickly. But along Galveston, I did not see Harvey have that kind of impact. It might be a much different story near Corpus Christi or Rockport.”

Figlus says researchers are constantly trying to find ways to minimize the destructive forces of erosion, such as using new types of vegetation to stabilize dunes, and other methods.

“There are always engineering solutions that can optimize a system for specific use. It always depends on what the objectives, goals, and financial constraints are and what the benefit to the public is,” he says.

“I am part of several research projects investigating various ways to make coastal areas more resilient to extreme storm impact. This includes better ways to redistribute sediment to areas where it is rapidly eroding and additional protection is needed. Such systems are commonly called back-passing systems. Also, beach nourishment design can be improved taking into consideration natural ways to distribute material to locations where it is needed (mega-nourishments, submerged feeder bars, etc.). We are also working on improving vegetation strategies for dune restoration projects to enhance the dunes’ erosion resistance and growth rates during wave impact.

“Finally, we are developing hybrid coastal structure concepts that involve covering a traditional storm protection hard structure like a levee, dike, or T-Wall with a sand dune cover to harness the benefits of both systems and provide aesthetic coastal systems at the same time that can function as regular dunes.”