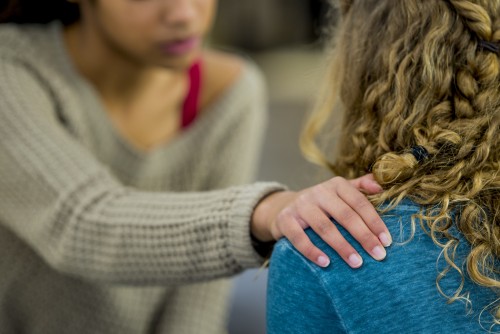 Results of the study show that the more friends differed on anxiety symptoms and depressive symptoms, the greater the incidence of friendship instability. Youth who resembled one another were more likely to remain friends from one year to the next.

Newswise — A new study on adolescent friendships offers support for the belief that misery really does love company. Researchers from Florida Atlantic University and collaborators examined the degree to which internalizing symptoms – anxiety, depression, social withdrawal, and submissiveness – predicted the dissolution of teen friendships. Do friendships end because of one child’s mental health problems or do they end because of differences between friends on the degree to which each friend suffers from these problems?

The study, published in the Journal of Research on Adolescence, was co-authored by Brett Laursen, Ph.D., a professor in the Department of Psychology in FAU’s Charles E. Schmidt College of Science, Amy C. Hartl, who received her Ph.D. at FAU, and Antonius H. N. Cillessen, Ph.D., a professor of psychology in the Behavioural Science Institute at Radboud University. Lead author of the study was Fanny-Alexandra Guimond, Ph.D., an assistant professor of psychology at the University of Ottawa.

The study sample included 397 adolescents (194 boys, 203 girls) in 499 same-sex friendships, who were followed from grade seven (median age 13), through to the end of high school in grade 12. The students were living in Connecticut at the time of the study. Discrete-time survival analyses were conducted with grade seven peer, teacher, and self-reports of internalizing symptoms as predictors of the timing of friendship dissolution.

“An important takeaway from our study is that children’s personal struggles need not adversely impact their social relationships,” said Laursen. “Mental health issues do not necessarily ruin chances of making and maintaining worthwhile friendships.”

Instead, the results indicated that the more friends differed on anxiety symptoms and depressive symptoms, the greater the incidence of friendship instability. Therefore, youth who resembled one another were more likely to remain friends from one year to the next.

“Behavioral similarity is tremendously important to a friendship,” said Laursen. “Shared feelings and shared experiences are the glue that holds a friendship together.”

“Compared with girls, boys are more competitive and confrontational in interactions with friends, suggesting that dissimilarity on submissiveness may be a liability when it comes to the activities that many boys prefer such as sports and games,” said Laursen. “Compared to boys, girls tend to favor extended dyadic exchanges, and so they may respond to submissive behavior with support and empathy, which may strengthen friendship ties.”

The authors conclude that individual levels of internalizing difficulties are not irrelevant to a friendship, but that there may be need to reconsider friendship dissolution models from a relationship perspective, shifting the emphasis away from characteristics that make individuals less desirable partners toward characteristics that make partners dissimilar, and therefore less compatible.

“When children are having difficulties making and keeping friends, it may be important to remind them about the importance of being similar,” said Laursen. “Too often, dissimilar friends become former friends.”

Journal of Research on Adolescence