In the Quantum World, the Future Affects the Past

An experiment shows that hindsight and foresight together more accurately “predict” a quantum system’s state than foresight alone. 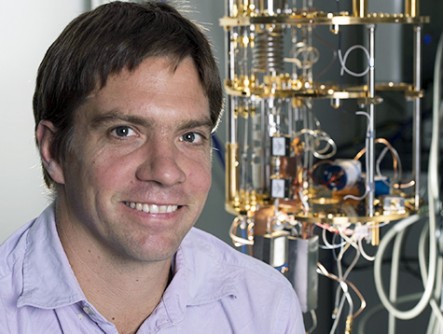 Physicist Kater Murch in his lab with the dilution freezer for the superconducting qubit he uses to explore quantum space. Experiments with the qubit demonstrate that in the quantum world the future affects the past.

Newswise — We’re so used to murder mysteries that we don’t even notice how mystery authors play with time. Typically the murder occurs well before the midpoint of the book, but there is an information blackout at that point and the reader learns what happened then only on the last page.

If the last page were ripped out of the book, physicist Kater Murch, PhD, said, would the reader be better off guessing what happened by reading only up to the fatal incident or by reading the entire book?

The answer, so obvious in the case of the murder mystery, is less so in world of quantum mechanics, where indeterminacy is fundamental rather than contrived for our reading pleasure.

Even if you know everything quantum mechanics can tell you about a quantum particle, said Murch, an assistant professor of physics in Arts & Sciences at Washington University in St. Louis, you cannot predict with certainty the outcome of a simple experiment to measure its state. All quantum mechanics can offer are statistical probabilities for the possible results.

The orthodox view is that this indeterminacy is not a defect of the theory, but rather a fact of nature. The particle’s state is not merely unknown, but truly undefined before it is measured. The act of measurement itself that forces the particle to collapse to a definite state.

It’s as if what we did today, changed what we did yesterday. And as this analogy suggests, the experimental results have spooky implications for time and causality—at least in microscopic world to which quantum mechanics applies.

Measuring a phantomUntil recently physicists could explore the quantum mechanical properties of single particles only through thought experiments, because any attempt to observe them directly caused them to shed their mysterious quantum properties.

But in the 1980s and 1990s physicists invented devices that allowed them to measure these fragile quantum systems so gently that they don’t immediately collapse to a definite state.

The device Murch uses to explore quantum space is a simple superconducting circuit that enters quantum space when it is cooled to near absolute zero. Murch’s team uses the bottom two energy levels of this qubit, the ground state and an excited state, as their model quantum system. Between these two states, there are an infinite number of quantum states that are superpositions, or combinations, of the ground and excited states.

The quantum state of the circuit is detected by putting it inside a microwave box. A few microwave photons are sent into the box, where their quantum fields interact with the superconducting circuit. So when the photons exit the box they bear information about the quantum system.

“We start each run by putting the qubit in a superposition of the two states,” he said. “Then we do a strong measurement but hide the result, continuing to follow the system with weak measurements.”

They then try to guess the hidden result, which is their version of the missing page of the murder mystery.

“Calculating forward, using the Born equation that expresses the probability of finding the system in a particular state, your odds of guessing right are only 50-50,” Murch said. “But you can also calculate backward using something called an effect matrix. Just take all the equations and flip them around. They still work and you can just run the trajectory backward.

The shattering thing about the retrodiction is that it is 90 percent accurate. When the physicists check it against the stored measurement of the system’s earlier state it is right nine times out of 10.Down the rabbit holeThe quantum guessing game suggests ways to make both quantum computing and the quantum control of open systems, such as chemical reactions, more robust. But it also has implications for much deeper problems in physics.

For one thing, it suggests that in the quantum world time runs both backward and forward whereas in the classical world it only runs forward.

“I always thought the measurement would resolve the time symmetry in quantum mechanics,” Murch said. “If we measure a particle in a superposition of states and it collapses into one of two states, well, that sounds like a process that goes forward in time.”

But in the quantum guessing experiment, time symmetry has returned. The improved odds imply the measured quantum state somehow incorporates information from the future as well as the past. And that implies that time, notoriously an arrow in the classical world, is a double-headed arrow in the quantum world.

“It’s not clear why in the real world, the world made up of many particles, time only goes forward and entropy always increases,” Murch said. “But many people are working on that problem and I expect it will be solved in a few years,” he said.

In a world where time is symmetric, however, is there such a thing as cause and effect? To find out, Murch proposes to run a qubit experiment that would set up feedback loops (which are chains of cause and effect) and try to run them both forward and backward.

“It takes 20 or 30 minutes to run one of these experiments,” Murch said, “several weeks to process it, and a year to scratch our heads to see if we’re crazy or not.”

“At the end of the day,” he said, “I take solace in the fact that we have a real experiment and real data that we plot on real curves.”