In Vitro Tissue Microarrays for Quick and Efficient Spheroid Characterization 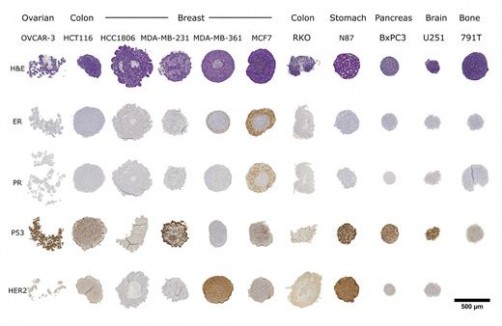 Spheroid arrays from 11 different cell lines stained with different markers. The cell lines are positioned in different columns, while the stains are arranged in rows. Top row: H&E staining, followed by staining for ER, PR, TP53 (P53), and Her-2 (cerbB-2). Scale bar is 500 µm.

The authors demonstrate the advantages of their technique with a mixed array made up of spheroid models from 11 different cell lines. They stain all spheroids simultaneously and multiplex five different markers on adjacent sections. The staining, imaging and analysis are automated. The authors openly share their protocols, designs and ImageJ macros to enable other researchers to apply the technique for safety and efficacy testing as well as model optimization and characterization.

Three-dimensional cell cultures such as spheroids and organoids are being increasingly adopted in commercial and regulatory compound assessments. Along with organ-on-a-chip models these in vitro cultures are promising increased physiological relevance and therapeutic predictivity in both safety and efficacy screens.

Most methods to analyze these advanced models rely on simplistic measurements of live vs. dead cells. These reductionist assays provide little molecular insight into the targets and mechanisms of drug action. Moreover, the readouts are not comparable to clinical data, such as biomarker expression and tissue morphology.

In Vitro Tissue Microarrays for Quick and Efficient Spheroid Characterization can be accessed for free, ahead-of-print at SLAS Discovery OnlineFirst: http://journals.sagepub.com/doi/full/10.1177/2472555217740576.