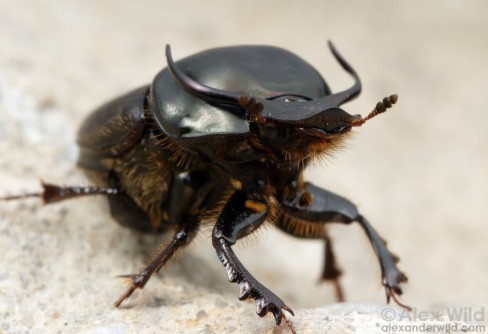 The study used beetles in the species Onthophagus taurus to learn about the role played by the dsx gene to "match" physical traits to males versus females. 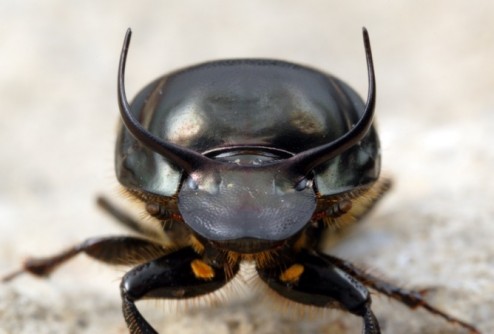 Armin Moczek's lab at Indiana University has pioneered the use of beetles as a model species for evolutionary development. 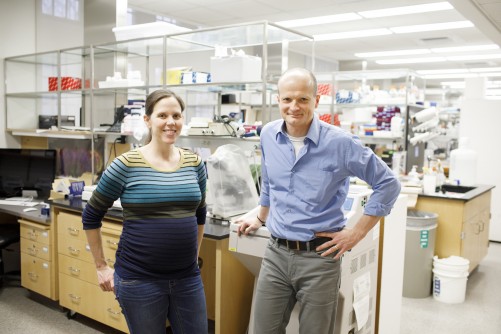 Cris Ledón-Rettig and Armin Moczek in the lab. 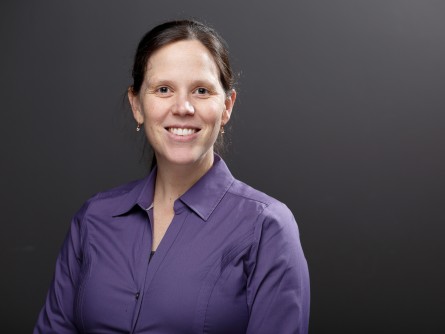 Newswise — BLOOMINGTON, Ind. -- Physical differences between males and females in species are common, but there remains much to learn about the genetic mechanisms behind these differences.

New research by scientists at Indiana University finds that the "master gene" that regulates these differences plays a complex role in matching the right physical trait to the right sex. The study, published Feb. 27 in the journal Nature Communications, reveals new details about the behavior of the gene called "doublesex," or dsx.

"We want to know more about this gene because it helps us answer a major question about development and evolution: How do animals with similar genomes -- such as males and females of the same species -- produce different versions of the same trait? And why do some traits, like ornamental features that attract mates, vary so widely, while others, like legs, don't?" said Cris Ledón-Rettig, a postdoctoral researcher in the IU Bloomington College of Arts and Sciences’ Department of Biology, who led the study.

The study is significant because it's the first to look at the effect of dsx across the whole genome. It finds that the gene isn't simply a "switch" that turns off certain male traits in females, as previously thought. Rather, it plays a highly complex role in controlling the expression of physical differences at different points in the genome based upon sex.

The paper’s co-lead author is Eduardo Zattara, a postdoctoral researcher in the Department of Biology. The senior author is Armin Moczek, a professor in the department.

The fine-grained control that dsx exerts over male and female traits is possible because the gene acts in a surprising variety of ways, Ledón-Rettig said. By activating different genes in males and females, for example, it can promote male or female versions of the same trait, such as genitalia. Or, by activating the same genes in males while simultaneously inhibiting them in females, it can promote opposite traits.

"The power to prevent the expression of male traits in females, and vice versa, is a critical feature," Moczek said. "It buffers traits that benefit only members of one sex from causing harm in members of the other."

For instance, in the species used by IU researchers to study dsx -- the beetle Onthophagus taurus -- males possess elaborate horns to battle rivals over females. These horns do not offer a similar reproductive advantage to females, however -- large horns would interfere with their ability to dig tunnels used to nest offspring.

Importantly, Ledón-Rettig said, the majority of these points did not overlap. This indicated that dsx didn’t simply turn certain genes "on" or "off" for most of the traits studied but rather affected gene expression at different locations in the genome based on sex.

"Essentially, dsx instructs the development of male and female versions of the same trait by influencing different genes in each sex," she said.

This was especially the case when they looked at the effect of dsx on the brains, which regulates sex-specific behaviors, and genitalia, used in reproduction. But for one trait -- head horns -- the study showed that dsx sometimes targets the exact same genes in both sexes. In this situation, dsx regulated the genes in opposite directions, creating completely horned males and completely hornless females. When the scientists disabled dsx, both sexes developed similarly sized intermediate horns.

Onthophagus taurus is one of the few insect species in which it’s possible to conduct a whole genome analysis since their genome has been sequenced by the i5k Project, a.k.a. "The Manhattan Project of Entomology," a large-scale effort supported by the U.S. Department of Agriculture that aims to transcribe the genomes of 5,000 insects and other arthropods.

Genetic sequencing of the species was conducted through the project using insects provided by Moczek’s lab at IU, which has pioneered the use of insects to study fundamental principles in evolution. Ledón-Rettig and Zattara are members of Moczek’s lab.

"We're eager to extend our work on role of dsx -- and other genes -- to sexual differences across other, closely related species of beetles," Ledón-Rettig said. "These beetles are really a powerful platform for unraveling the fundamental mechanisms that underlie evolutionary diversification of sexual traits across species."

This study was supported in part by the National Science Foundation.