Researchers Report Biomarkers and Apps That Predict Risk of Suicide 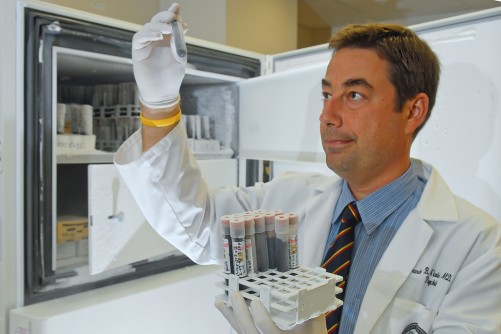 Newswise — INDIANAPOLIS -- People being treated for bipolar disorder and other psychiatric illnesses are at greater risk of attempting suicide, but physicians may now have tools to predict which of those individuals will attempt it and intervene early to prevent such tragedies from occurring.

In the article "Understanding and predicting suicidality using a combined genomic and clinical risk assessment approach," researchers at Indiana University School of Medicine reported Tuesday in the Nature Publishing Group’s leading journal in psychiatry, Molecular Psychiatry, that they have developed blood tests and questionnaire instruments that can predict with more than 90 percent accuracy which of those patients will begin thinking of suicide, or attempt it.

"We believe that widespread adoption of risk prediction tests based on these findings during healthcare assessments will enable clinicians to intervene with lifestyle changes or treatments that can save lives," said Alexander B. Niculescu III, M.D., Ph.D., professor of psychiatry and medical neuroscience at the IU School of Medicine and attending psychiatrist and research and development investigator at the Richard L. Roudebush Veterans Affairs Medical Center.

Using RNA biomarkers from blood samples along with a newly developed questionnaires in the form of an app, the researchers were able to predict which individuals in a group of patients being seen for a variety of psychiatric illnesses would experience significant suicidal ideation with approximately 92 percent accuracy. Among patients with bipolar disorder, the accuracy reached 98 percent, Dr. Niculescu said. The combination of biomarkers and app was also accurate in predicting which of the patients would be hospitalized for suicidality in the year following testing (71 percent across all diagnoses, 94 percent for bipolar disorder).

The questionnaires by themselves, implemented as apps on tablets, were able to predict the onset of significant suicidal thoughts with more than 80 percent accuracy.

The research expands upon work reported by Dr. Niculescu and colleagues in 2013 in which they identified a panel of biomarkers that were significantly elevated in bipolar disorder patients with suicidal thoughts or who were hospitalized as a result of suicide attempts.

"We now have developed a better panel of biomarkers that are predictive across several psychiatric diagnoses. Combined with the apps, we have a broader spectrum predictor for suicidality," Dr. Niculescu said. “In additional to reproducing and expanding our own previous work, we reproduce and expand other groups' results in this burgeoning field.”

The current study began with a group of 217 male psychiatric participants, followed by Dr. Niculescu and colleagues for several years with diagnoses of bipolar disorder, major depressive disorder, schizoaffective disorder, and schizophrenia. The researchers identified 37 participants who switched from no suicidal ideation to high suicidal ideation at different testing visits. The scientists were able to identify RNAs that were present at different levels in blood samples taken at those different testing visits, in common across these 37 individuals. Those candidate biomarkers were then evaluated using the Niculescu group's Convergent Functional Genomics approach, to prioritize the best markers.

Next, working with the Marion County (Indianapolis, Ind.) Coroner's Office, the researchers validated those prioritized biomarkers using blood samples from 26 men who had committed suicide.

Finally, the researchers used blood samples and medical records from a different group of patients with the same psychiatric diagnoses to confirm that the biomarkers and apps predicted suicidal ideation, and also examined their ability to predict future hospitalizations for suicidality in the first year following testing.

The app-based questionnaires were developed separately, said Dr. Niculescu, director of the Laboratory of Neurophenomics at the Institute of Psychiatric Research at the IU School of Medicine.

One of the apps assesses measures of mood and anxiety; the other asks questions related to life issues including physical and mental health, addictions, cultural factors and environmental stress. Neither app, he emphasized, asks whether the individual is thinking of committing suicide.

Dr. Niculescu said he believes the apps are ready to be deployed and tested by medical professionals, particularly in emergency department settings. The biomarkers could also be more widely tested for in the near future he said.

However, he noted two limitations that require additional research. First, all of the participants in this study were men. Studies in women are currently being conducted and are showing promising preliminary results. In addition, the research was based on work with people with psychiatric diagnoses. How well the biomarkers would work among people who have not been diagnosed with a psychiatric disease is not known.

Additional information about Dr. Niculescu’s work is available at his laboratory website: www.neurophenomics.info.