Johns Hopkins Children’s Center Patients and Families to Be Featured in Mix 106.5 Annual Radiothon This Week 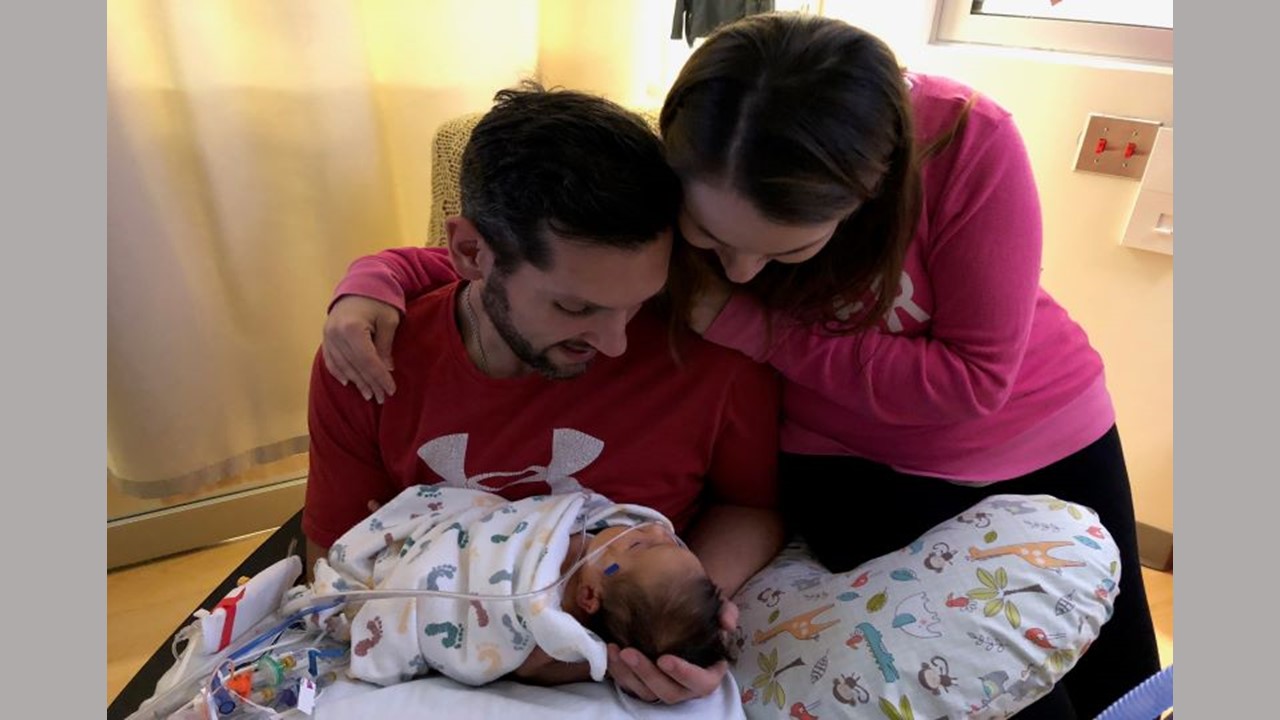 Kinsley Wolsin with her parents during her hospitalization at Johns Hopkins Children's Center.

Newswise — The 32nd annual Mix 106.5 Radiothon benefiting Johns Hopkins Children’s Center kicks off this week. The Children’s Center’s largest fundraising event of the year will air on the Baltimore radio station Thursday, Feb. 25, and Friday, Feb. 26, from 6 a.m. to 7 p.m. each day.*

The radiothon and the generous assistance of donors enable Children’s Center providers and staff members to continue providing world class care to patients, while supporting their families in times of need. During this year’s event, 16 patients and their families –– nine new, seven returning –– will be featured as part of the event. Among the patients is 2-year-old Kinsley Wolsin.

Kinsley’s Story
Kinsley was born in September 2018 during an emergency delivery. The umbilical cord was wrapped around her neck. She was barely breathing and only had a slight pulse. Her mother, Jennifer Wolsin of Baltimore, recalls Kinsley’s gray color when she was born. The Johns Hopkins care team was able to resuscitate Kinsley, but “from there, it was a roller coaster,” her mother says.

Kinsley was immediately taken to the neonatal intensive care unit (NICU). When the team tried to insert an intravenous needle or prick her heel for testing, she began spitting up blood and bleeding profusely. Eventually, the bleeding was under control, but the next day, Kinsley’s belly appeared to be growing. After a computerized tomography scan and exploratory surgery, doctors discovered that Kinsley’s stomach ruptured. She only had 10% of her stomach left, and it was not connected with her esophagus to allow proper digestion. Because of her ruptured stomach and continuing blood loss, Kinsley received 78 blood transfusions in the first two weeks of her life, and she underwent nine surgeries during her first four months.

The last surgery, in January 2019, was a monumental life-saving procedure performed by Daniel Rhee, M.D., M.P.H., pediatric surgeon at the Children’s Center and assistant professor of surgery at the Johns Hopkins University School of Medicine. During the surgery, he created a stomachlike reservoir in Kinsley’s abdomen out of her intestines and connected it to her esophagus to enable Kinsley to digest milk and formula properly. The surgery was a success, and less than two months later, she left the hospital after being an inpatient for 173 days.

Today, because of the toll on her body at such a young age, Kinsley has chronic kidney disease and will likely need a kidney transplant in the next few years. Still, her mother, Jennifer, says Kinsley is meeting all of her development goals and is “an average 2-and-a-half-year-old.” She can eat normally — Jennifer says Kinsley “eats like a horse” — and her parents have affectionately nicknamed her “Godzilla” because she climbs on everything.

“She’s a miracle, and Johns Hopkins Children’s Center gave me the gift of being able to watch Kinsley grow up,” Jennifer says. “They are the reason that we became a family of three.”

Generosity Goes a Long Way
In previous years, funds raised during the two-day radiothon broadcast have helped buy lifesaving medical equipment, support patient care, fund important research, develop innovative tools and programs, and provide transportation to and from doctor’s appointments. Funds have also been used to buy books, toys, games, art supplies and more to offer young patients an escape from what is anything but normal for a child.

Since beginning in 1990, the radiothon has raised nearly $24 million for pediatric patients and their families.

*Note: To help ensure the health and safety of our patients and staff members, media outlets are currently not permitted on the hospital campus. Our media relations team would be happy to help facilitate a virtual interview.