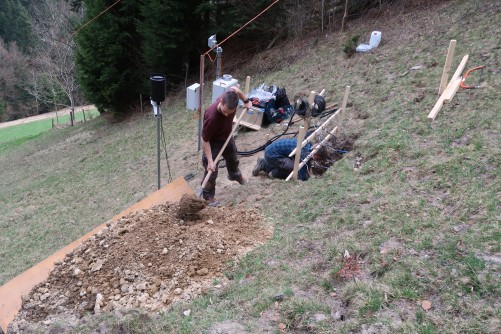 Florian Schäfli (left) and Adrian Wicki (right) install soil moisture sensors to help verify electrical resistivity tomography (ERT) measurements. This requires digging a trench which filled in again after the installation of the sensors. ERT uses a series of electrodes in the soil to measure the electrical resistance of the ground. 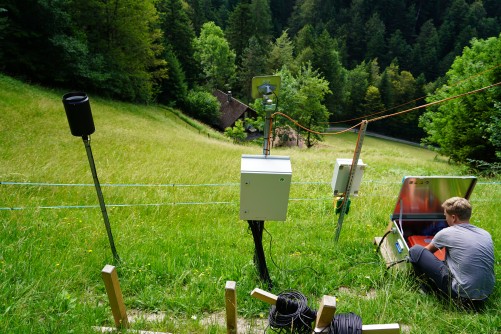 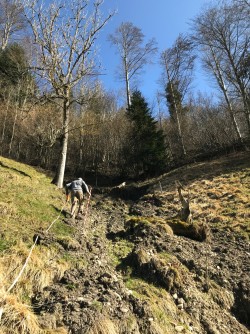 Christian Rickli measures the landslide that occurred about one thousand feet from the study site in Switzerland. Observing a real landslide helped the scientists assess how well electrical resistivity tomography (ERT) could work for providing early warnings to keep residents near landslide prone areas safe. 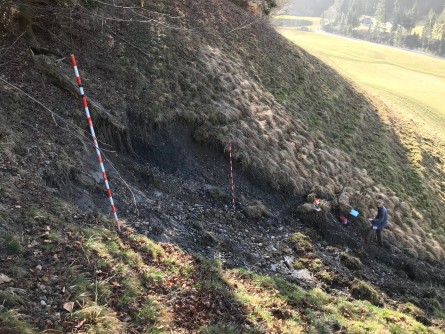 Christian Rickli measures the landslide that occurred about one thousand feet from the study site in Switzerland. The landslide helped confirm the findings that critically saturated conditions can be detected and differentiated from non-critical situations.

Newswise — September 28, 2022 - In the United States alone, a few dozen landslide deaths are recorded every year. They often happen when gravity pulls rocks and soil down an unstable slope. The trigger may be caused by natural events like rain or snowmelt. The extra water suddenly weakens the slope, and it gives way.

Landslides happen quickly. So, it’s vital for governments to monitor conditions and provide warnings in landslide prone areas during times that landslides are more likely to occur. Such warnings can save lives, says soil scientist Adrian Wicki.

“Landslides are a major natural hazard in mountainous regions. If authorities and the public are warned before an event, people and goods can be evacuated and brought to safety,” says Wicki.

Wicki is a researcher with the Swiss Federal Institute for Forest, Snow and Landscape Research, and has been studying new methods for landslide monitoring. Specifically, he’s been looking at new ways to track soil moisture, a major predictor of landslides.

The research was recently published in the Vadose Zone Journal, a publication of Soil Science Society of America.

In the study, Wicki and researcher Christian Hauck studied electrical resistivity tomography, or ERT. ERT uses a series of electrodes in the soil to measure the electrical resistance of the ground. When soil moisture rises, resistance drops, because water is a good conductor of electricity. So ERT can serve as a good measure of the water content of soils.

The technique has several benefits over other soil monitoring systems. These typically place dedicated water sensors into holes in the ground.

“ERT can detect the spatial variation of water infiltration into the ground. This is important in places where the infiltration process is very diverse,” says Wicki. “Also, the ground is not disturbed when installing the system, which is very important for the accuracy of the measurement.”

In their work, Wicki and Hauck studied a landslide prone slope in the Napf region of Switzerland. They placed ERT sensors along the slope and measured changes in the electrical properties for nearly 10 months. The ERT system was compared to traditional soil moisture probes.

The scientists found ERT offered high-quality data about changes in the moisture of the soil.

“It successfully represented the most valuable information that we already got from soil moisture sensors. It was able to differentiate between critical and non-critical conditions for landslide triggering,” Wicki says.

The study even captured a real landslide. Near the end of the study period, a shallow landslide happened about one thousand feet away from the ERT sensors. Observing a landslide can help scientists train their methods for the real world.

“The landslide helped confirm the findings that critically saturated conditions can be detected and differentiated from non-critical situations,” says Wicki.

Although ERT performed well at measuring soil moisture, there is still more research to be done. The system was prone to errors when the soil was very wet. And it would benefit from lab tests to ensure that measurements are more reliable. Still, ERT is a promising technology for specific areas.

“It could be deployed at locations where infiltration is very diverse or where it is difficult to install in-situ sensors in the soil because the soil is very rocky or shallow. Since the method is more costly than in-situ sensors, it might be installed at selected locations only,” Wicki says.

Thanks to methods like ERT and other kinds of landslide monitoring, residents in landslide prone areas can trust that there are ways to protect themselves from danger. “It is possible to detect critical situations for landslide triggering,” says Wicki. “Therefore, it is important to trust the authorities and follow warning systems that are in place.”